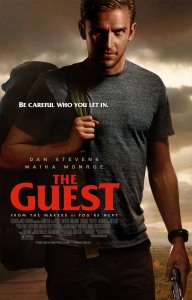 Hot on the heels of their surprise hit, You’re Next (2013), director Adam Wingard and writer Simon Barrett have returned with another gleefully demented genre offering. Whereas their last film took the “home invasion” sub-genre into some truly inspired new directions, this time around, the dynamic duo have set their sights on “stranger in our home” films. Like You’re Next, The Guest (2014) is a gonzo good time, full of clever writing, subtle black-as-coal humor and some truly asskicking action setpieces. At the center of the film is a truly inspired trio of performance from Dan Stevens as the handsome, charismatic and ultra-sensitive “golden boy” who may or may not be a murderous psychopath and Maika Monroe and Brendan Meyer as the savvy kids who may or may not be able to stop him dead in his tracks. The end result? Over 90 minutes of pure, pulpy, cinematic bliss and another check in the “Win” column for the Wingard/Barrett juggernaut.

As the Peterson’s mourn the unexpected death of their soldier son, Caleb, in Iraq, a mysterious visitor shows up and puts the household into a topspin. David (Dan Stevens), a quiet, ridiculously polite and charismatic young man, claims to be a friend of Caleb’s and fellow soldier. After getting discharged, David sought out the Petersons, as per Caleb’s last wish, in order to “watch over them.” Mother Laura (Sheila Kelley) is only too happy to have David around, since any reminder of her beloved son is a good thing. Father Spencer (Leland Orser), however, isn’t quite as big on David, worried that the seemingly nice young man might have a bit of “the PTSD.” For their parts, Caleb’s sister and brother, Anna (Maika Monroe) and Luke (Brendan Meyer), seem to regard David with a mixture of curiosity and faint amusement: the guy is so unbelievably polite and nice that he might as well have stepped out of a woodcut, for all his old-fashioned “aw shucks”-ness.

David ends up staying with the Petersons and goes about the business of ingratiating himself into the family’s good graces: he helps Luke with his homework (with some difficulty), drinks beers with Spencer as he pours his heart out about his shitty job, helps Laura around the house and goes with Anna to a Halloween party. All seems nice and normal, even if we sometimes get shots of a pensive David that border on the unsettling. At one point, Spencer asks David if he’s tired: “I don’t need much sleep,” he responds, with a knowing look, and anyone paying attention should get a little of the ol’ goose flesh.

The situation hits a new level when David finds out that Luke is being bullied at school: in a truly awe-inspiring scene, David has Luke take him to the bullies, at an isolated roadside bar well-known for serving minors. After taunting the high school toughs with a particularly offensive drink order, David proceeds to wipe the bar up with the creeps in a scene that makes Road House (1989) look like a commercial for allergy medicine. The point is crystal clear: David is absolutely not the kind of guy that you want to fuck with, in any way, shape or form.

As David continues to thread his way through the lives of the various Petersons, however, Anna begins to notice that strange things are happening all around them, including the unexpected death of one of her friends. As Anna begins to believe that David might not be quite who he seems, the rest of the family seem to close ranks, more convinced than ever that David is a true-blue friend and confident. Is Anna right or has she unfairly maligned this sweet, young man? Will she be able to convince her family of the “truth” (whatever that might be) before it’s too late? Why, exactly, is David here? Is he really trying to protect the family, at all costs, or is his real mission to destroy everything? By the time it’s all over, Anna will have learned a very important lesson: always be careful who you invite into your home…not all guests are created equal.

Similar to You’re Next, The Guest is sort of a hybrid-genre film, melding together elements of action, horror, thriller, comedy and drama into one seriously delicious stew. The film is stuffed to bursting with some ridiculously energetic action setpieces (the bar beat-down is, without a doubt, solid gold: if you don’t shadowbox the screen, you might be watching a different film), as well as some genuinely nail-biting moments of pure tension. The drama elements are well-represented via the family’s interpersonal dynamics and the ways in which they subtly come to accept (and rely on) David’s presence in their lives. One of the biggest and best surprises regarding The Guest is how funny it actually is: while this is certainly not an out-and-out laugh-riot, the vein of dark humor that runs through the film is quite pronounced and leads to some of its best moments. The bar fight sequence is a great example of all of the elements coming together in one heady moment: this is the kind of genre splicing that folks like Robert Rodriguez and Quention Tarantino excel in and Wingard/Barrett knock it right out of the park.

At times, The Guest almost plays like a more tongue-in-cheek, conventional version of Refn’s Drive (2011): the production values are high, the John Carpenter-influenced electro-score (courtesy of Steve Moore) is utterly fantastic and the whole thing is stylish almost to a fault (the finale, in particular, is an absolute masterclass in stylish anarchy). Where Ryan Gosling’s Driver was a self-styled, if nihilistic, white knight, however, Dan Steven’s David is a decidedly more shadowy individual: for the majority of the film, it’s impossible to really gauge his motives, lending an overriding air of unease and tension to the proceedings. We knew why the Driver was doing what he did, regardless of how violent, self-destructive or pointless his actions, but we’re never sure about David. Even when he’s whupping ass on the “bad guys,” we’re still never quite sure if he’s right or wrong.

While the entire cast is solid, Stevens, Monroe and Meyer are exceptional as the trio at the center of everything. Monroe is a nice, strong female character, with a sardonic edge and just enough youthful inconsistency to make her seem like a real person, rather than a stock “final girl.” For his part, Meyer makes Luke quite likable, while still allowing for subtle hints of darkness around the edges: the scene where he emulates David and kicks the shit out of one of his bullies is all kinds of awesome but it’s also kind of scary and unhinged: predominantly known for TV roles in the past, here’s to hoping that Meyer gets more opportunities like this to stretch his wings.

And then, of course, there’s Dan Stevens. Almost supernaturally good-looking, with piercing eyes and a purposefully blank expression, the British actor is the kind of fellow that you might expect to play a prince in a life-action Disney film, not a potentially insane and murderous misanthrope. His performance is pitch-perfect, however, full of the kind of subtle mannerisms and expressions that build his character without handing the audience a cheat-sheet to follow along with. When David is being nice, he’s the kind of dude that everybody wants to hang out with: nowhere is this made more clear than the awesome scene where David triumphantly walks into the Halloween party, carrying kegs like they were six-packs. It’s the kind of bit that makes you want to high-five the nearest bro. When David unleashes the darkness, however, he’s absolutely terrifying, leading to some of the most surprising, shocking bursts of violence I’ve seen in some time. It’s a terrific balancing act and it’s to Stevens immense credit that he makes it look so easy. Let’s hope this is but Act One of Steven’s career in genre films, since we could absolutely use more of this guy ASAP.

Perhaps the most important aspect of The Guest is how much fun it is. Like You’re Next, Wingard and Barrett’s newest film is an absolute blast from start to finish: adrenalized, stylish and smart, The Guest is almost calculatedly crowd-pleasing, jumping from one awesome setpiece to the next. If the ultimate revelation about what’s going on is both a little silly and a little tired, it’s the only thing about The Guest that ever feels less than totally righteous: I’m not saying that I disliked the “reveal” so much as that I felt Barrett could have come up with something a little stronger and/or stranger. That being said, I wouldn’t change a single frame of the climax, which manages to toe the line between “ridiculous” and “ridiculously cool” with total aplomb.

Ultimately, The Guest is a metric ton of good times, all wrapped up in a nice, shiny package. When the film is completely off-the-rails, such as the bar fight, Halloween party and finale, it’s completely unbeatable. More than just an asskicking action film, however, Wingard and Barrett toss all kinds of subtle details into the mix that constantly elevate the film. From David’s extremely awkward sex scene with one of Anna’s friends to the subtle moment where David and Luke carve pumpkins to the triumphant scene where David takes Luke’s obnoxious principal to task, there are so many little quirks here that add immeasurably to the richness of the film’s tableau.

Judging by this film and You’re Next, it would seem that Wingard and Barrett have decided to be the preeminent neo-thriller advocates for our modern day and age. All I can say to that is: bring on the next one, ASAP…we need more of these films like we need water and oxygen.