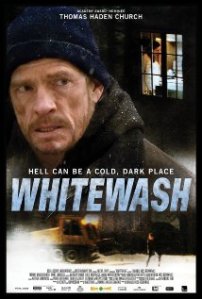 If there’s a big takeaway from writer/director Emanuel Hoss-Desmarais’ exceptional debut feature, Whitewash (2013), it’s a pretty cynical one: people suck. Oh, sure: individuals may do good, selfless things but the rest of humanity will, invariably, find some way to screw it up. To wrap it up with a nice, clichéd bow: no good deed goes unpunished. The journey to this revelation is a twisted one, however, and there’s a genuine mystery at the heart of this blackly comic little wonder, albeit a small one: why, exactly, did Bruce (Thomas Haden Church) run over Paul (Marc Labreche) with a snowplow?

The event in question happens at the very onset of the film and the answer will be gradually revealed over the next 80-some minutes via a series of flashbacks. What we get at the beginning, however, has all of the linear insanity of a nightmare: we see Bruce run Paul over (via a gorgeous long shot) and then join him as he rides his snowplow off into the darkest recesses of the nearby forest, where the vehicle inevitably stalls out. From this point on, the film splits its difference between being an outdoor survival flick, ala Wrecked (2010), and being a prickly dark comedy about the subtle ways in which humans drive each other crazy.

There’s more to the film than meets the eye, however: much more. For one thing, unlike most survival dramas, Bruce doesn’t appear to be trapped. There’s no giant boulder pinning his arm, no crushed car to keep him in place. Rather, what’s trapping Bruce out in the cold hell of a brutal Quebecan winter is his own internal turmoil. As we begin to piece more of the story together, via the numerous flashbacks, we also start to put together a better picture of Bruce: a hard-drinking, salt-of-the-earth type, Bruce is an easy-going fella who’s fond of eating his dessert before his entrée and thinks nothing of helping complete strangers, regardless of the inconvenience to himself. He’s a sad man, in many ways: his wife has died and the house is filled with belongings and memorabilia that makes her an omnipresent figure. There are a lot of facets to Bruce but one questions hangs heavy over everything: why would a guy like this run over someone else with a snow plow?

We do eventually get the answer but, as often happens in these situations, the journey is more important than the destination. As we learn more about Bruce and his “victim,” the mysterious and unbelievably obnoxious Paul, we begin to understand, piece by piece, what might drive a seemingly ordinary guy to snap. By the time we get to the brilliantly concise finale, we have many but not all of our answers. To paraphrase the Big, Bad Wolf: all the better to use our own minds, then.

For a modest, unassuming film, I was most impressed with Hoss-Desmarais’ debut. For one thing, the cinematography (courtesy of Andre Turpin) is absolutely astounding: with no hyperbole, the film looked like a million bucks and featured some stunningly beautiful shots. There’s one shot, where Bruce’s snowplow recedes into the background, taking all of the light with it and rendering the screen pitch-black, that’s practically a masterclass on evoking mood (besides being gorgeously framed). The film’s colors are bright and vibrant, with deep blacks, crisp whites and a truly ingenious use of shadows and negative space.

The other high point in the film, of course, is Thomas Haden Church’s commanding performance as Bruce. For the most part, the film is a one-man show and Church is more than up for the task. Even his voice, deep and reverberating, brings new layers and context to a voice-over convention that is too often misused: the voice-overs in Whitewash don’t repeat unnecessary visual information…they deliver the main character’s inner thoughts and observations in a way that enriches the overall story. If for nothing else, I must praise Hoss-Desmarais’ writing skills and entreat other screenwriters/directors to follow his lead: make the voiceover mean something or get it the hell out-of-the-way.

Awesome voice aside, Church is stone-cold perfect in the role: his dryly humorous quips and facial expressions deliver miles of character in shorthand and the actor is so charismatic that spending an entire film stuck with Bruce is something significantly less than torturous. Truth be told, I had kind of forgot about Church before this film, despite being a big fan of the TV show Wings back in the day. I’m not sure if Whitewash counts as a comeback (did he ever go anywhere or was I just not paying attention) but Church deserves more (and bigger) films in the future. Here’s to hoping this helps kick the door in.

Also impressive, for different reasons, is Marc Labreche as the odious Paul. Paul is kind of a difficult character to parse, since we start to learn about his true character over time. Nonetheless, Labreche is pretty great at hitting all of the necessary beats: his long-winded story about Mexico starts to pull back the curtain hiding the wizard (in a truly organic way), while his ridiculous bar-room dance must be seen to be believed. Most importantly, Church and Labreche make a great odd couple: the film wouldn’t be nearly as effective if their relationship didn’t seem so real.

Lest my praise seem too effusive, Whitewash is definitely not a perfect film. Despite the great script, there are a few odd plot-holes that never get resolved and the back half of the film ends up being more confusing than seems necessary. In the long run, however, none of the film’s problems ever approach the level of “deal-breaker.” The acting is extraordinary (no lie, Church deserved some kind of award for this), the script is tight and the cinematography is flat-out beautiful. Hoss-Desmarais makes particularly good use of the Canadian countryside, which almost becomes a third character in the film. The cherry on the sundae? A pitch-perfect, sardonic, dry-as-dust final shot that feels like the filmmakers decided to take a victory lap.

Nowadays, it seems that cheaply made, disposable independent films are a dime-a-dozen (hell, maybe that’s what Netflix is payin’ em these days). The good ones? Far less frequent. The great ones? Even rarer still. Whitewash, in case anyone is keeping score, is one of the great ones. Here’s to hoping this is the beginning of a long and fruitful writing/directing career for Hoss-Desmarais, who first cut his teeth as an actor in films like The Day After Tomorrow (2004). While moving behind the camera isn’t always the best move for an actor, Hoss-Desmarais proves that the best things don’t always fall neatly within the lines.