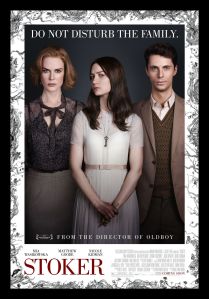 Pitched somewhere between Flannery O’Connor’s Southern Gothics and Pedro Almodovar’s psychosexual jaw-droppers, Korean auteur Chan-Wook Park’s English-language debut, Stoker (2013), is quite a piece of work. Long known for films that are as impressive to look at as they are often difficult to watch, Park’s newest film pulls few punches and holds even fewer hands, coming off as more fairy-tale influenced than any of his previous films, achieving an intoxicating, if confounding, atmosphere that’s fairly close to a fever dream. For anyone who expected the transition to Western films to “tame” park, Stoker stands in towering confirmation to the idea that Park, like all true film auteurs, will always follow his muse first and popular conventions second. While the film won’t supplant Park’s classic “Vengeance” trilogy anytime soon, Stoker is a meticulously crafted, often beautiful, treatise on the destructive nature of obsession and the familial secrets that haunt us all. While the movie seems slightly more subdued than films like Oldboy (2003) or Lady Vengeance (2005), it still packs a pretty vicious bite, albeit one informed by a particularly chilly sensibility.

Stoker centers around the surviving members of the titular family, namely the neurotic Evelyn Stoker (Nicole Kidman) and her odd, 18-year-old daughter, India (Mia Wasikowska). India’s father, Richard (Dermot Mulroney) has just been killed in a car accident, an event which has, effectively, shattered what remains of Evelyn and India’s lives. At the funeral, the Stokers are introduced to Richard’s long-lost brother, Charlie (Matthew Goode), a handsome, intense young man who claims to have been traveling the world for many years. He wants to stay and help Evelyn and India make it through their current tragedy, although his motives seem to lean more towards romancing India’s mother than to helping to soothe their mental wounds.

As Charlie hangs around, India begins to pick up little hints of things that may be…well, just a little askew, as it were: a strange argument with the housekeeper, Mrs. McGarrick (Phyllis Somerville), that seems to come out of nowhere; Charlie’s strange, knowing glances at India; Aunt Gwen’s (Jacki Weaver) seeming distrust and unease around Charlie; a piano lesson that hovers at the acceptable boundaries between instruction and seduction…indeed, trouble seems to follow Charlie around like a second skin, facts which are certainly not lost on young India.

To complicate things, however, India appears to be just as mysterious and complicated a figure as her uncle. She’s a dour, serious young woman who’s constantly bullied and harassed at school (one obnoxious student draws naked pictures of India and shoves them in her face, while constantly “punching at” her face, always stopping just shy of actually making physical contact) and doesn’t seem to have any friends whatsoever. There’s one telling scene where India spends her art class drawing the detailed pattern on the inside of the vase, rather than the vase, itself, as her other classmates do: as with everything else, India just doesn’t see things in the same way as the rest of the world.

As Charlie continues to stay with the Stokers, however, the psychosexual storm gets whipped into a veritable frenzy: India’s sexual awakening seems to coincide with Charlie’s increased interest in both Evelyn and India, although her coming-of-age has started to take on certain violent aspects, not the least of which is the explosive moment where she finally strikes back at her bully. As events progress, India gets ever closer to deciphering the mystery of the key that hangs around her neck, a key that will help explain not only Uncle Charlie’s strange behavior but will also set India upon a path of self-discovery, a path that will ultimately lead to both salvation…and destruction.

As with all of Park’s films, Stoker is so carefully crafted as to seem almost like a clockwork marvel. The film is a constantly moving, evolving puzzlebox, a tricky construction that purposefully obscures key information, leaving the audience in the dark for a majority of the proceedings in a similar manner to Oldboy. This sense of complexity extends to every aspect of the film, from its narrative structure to its visual language, although the cinematography ends up being the most identifiable aspect of this structure. Quite simply, Stoker’s cinematography and shot construction, courtesy of long-time Park collaborator Chung-hoon Chung, is a complete marvel. It goes without saying that Stoker is frequently beautiful and always interesting to look at: more impressive are the myriad ways in which Park and Chung use the visual language of film to get across their subtextual themes and ideas. The scene where India is completely encircled by identical shoeboxes…the bit where a spider crawls up her leg and between her thighs…the gorgeous, surprising shot where brushed hair suddenly becomes a flowing field of waist-high grass…unrelated imagery juxtaposed in ways that seem to indicate that everything, no matter how irrelevant is interconnected…Stoker is all but bursting with subtle nuance and just-out-of-eyesight symbolism.

Into this beautifully realized visual tapestry, then, Park pours a trilogy of performances that manage to accentuate and support each other in some nicely organic ways. Mia Wasikowska, currently making quite a name for herself in just about every type of role imaginable, is pitch-perfect as the morose, guarded India. In the hands of any other actress, India might have come across as more enigmatic than necessary, a “real-life” Wednesday Addams who exists purely to pour Pernod on everyone’s ice cream. Wasikowska is amazingly subtle, versatile performer, however, and India becomes a full-realized character in her capable hands. I won’t lie and say that I found India to be likable, at any point in time, but it wasn’t hard to see things from her point of view, as twisted as it may be: her continuous voice-overs were also well-handled, allowing us insight into her cluttered little brain.

For her part, Kidman turns in another dependably solid genre performance: there’s always a thinly concealed streak of insanity running through her controlled performance but Kidman’s Evelyn never comes across as a certifiable nut. If anything, she’s a wounded, needful mother who foolishly pines for the one thing that mothers take for granted: the love of their own children. Evelyn is never a completely pathetic character, however, mostly thanks to the cold steel that Kidman brings to the performance, as if one could see the metal framework just below the skin.

Special mention must also be made of Matthew Goode’s performance as the sinister Uncle Charlie. Although I must admit to being far less familiar with his career than either Kidman or Wasikowska’s, I was completely taken with Goode’s performance. Like Wasikowska’s take on India, Goode brings an overriding sense of barely contained neuroses to his depiction of Charlie: he’s able to convey a world of information with just the barely perceptible uptick of an eyebrow or a smile that’s just slightly too curdled to instill much warmth. Goode’s performance is the epitome of restrained tension: you know that he’s going to uncoil and explode, at some point, but you’re damned if his eyes give any indication as to when that might be. By the film’s conclusion, Goode and Wasikowska make an almost unbeatable pair, playing off of each other’s mannerisms and tics in some truly impressive, startling ways. Park is definitely an “actor’s director” and his newest film comes top-loaded with some typically impressive treading of the boards.

As with almost all of Park’s films, Stoker is incredibly easy to respect, although it’s just a little more difficult to really love. While the film is constantly twisted and the narrative always unpredictable, this complexity sometimes translates into moments that are pure-headscratchers: by the conclusion, I found myself second-guessing a few “facts” that previously seemed pretty solid, mostly because I felt a little lost in the back-and-forth of the flashback-heavy narrative. The film is also just about as bleak and chilly as a film can possibly get: this sense of frigid sterility may be a little off-putting for many Western audiences, although there’s nothing in here that will challenge Western taboos in quite the same way as the plot twist from Oldboy does.

Ultimately, Park’s Stoker is an impressive English-language debut and a mighty fine film on its own rights, even if it’s not quite as incendiary or feral as the Korean films that preceded it. On a craft-level, the film has few equals: quite frankly, it’s one of the most astoundingly beautiful films I’ve ever laid eyes on. If the narrative/thematic elements of the film don’t get me quite as jazzed as the visual/aural elements…well, that’s alright, too. I respect and trust Park enough to stay with him on his cinematic journey into the darkness of the human soul: in a world where more and more things seem to get “dumbed down” for the masses, it’s always refreshing to find an uncompromising voice who trusts that we’ll “get it,” even if we’re not quite sure what “it” is.