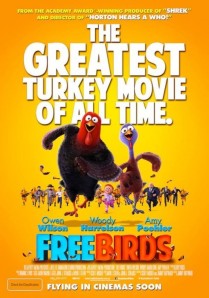 I’ve always enjoyed animated films but there came a point when I kind of gave up on the modern crop of “kids’ movies,” probably around the time that Shrek (2001) became such a huge hit. While I’ve never been a big fan of the movie’s animation style, I was even less impressed with the nearly nonstop pop-culture references that seemed to function as jokes. Similar to things like the Scary Movie series, Shrek and its sequels seemed to go down a kind of rabbit-hole of irrelevance: when every joke is about something “hot and current,” the whole film will be hopelessly dated within a week. Since Shrek was so successful, this “pop-culture-scattergun” approach seemed to become the norm and I resigned myself to cherry-picking the individual films that seemed to appeal more to my sensibilities.

Lately, however, there seems to be a bit of a renaissance in more “traditional” animated films, movies that still appeal to kids with their positive themes, goofy sense of humor and bright color palettes, yet are composed of more than just mindless references to current films or cultural trends. In particular, the last five years have shown a real explosion in these types of animated films: Coraline (2009), The Secret of Kells (2009), 9 (2009), A Town Called Panic (2009), Cloudy with a Chance of Meatballs (2009), A Cat in Paris (2010), Chico and Rita (2010), A Monster in Paris (2011), Rango (2011), ParaNorman (2012), and The Croods (2013) were not only great, “old-fashioned” animated films but some of my favorite films of their respective years. To this list I can now add Jimmy Hayward’s Free Birds (2013), a rambunctious, intelligent and big-hearted treatise on thinking for yourself, working hard and being your own bird.

“Turkeys are so dumb, they think the farmer is their friend.” So begins Free Birds and so we get our first introduction to our hero, Reggie the Turkey (Owen Wilson). Reggie is a smart, introspective turkey who’s continually dismayed by his fellow turkeys’ lazy, lunk-headed behavior. He’s pretty sure that the farmer is fattening them up for dinner and he’s right: as the bearer of bad news, the group tosses him outside to serve as “representative”/sacrificial goat. As often happens in these kinds of films, however, this is not Reggie’s time to go into that good goodnight: turns out his farm has been chosen by the President of the United States as the site of the annual Thanksgiving turkey pardoning. When the POTUS’s daughter falls in love with Reggie, he gets whisked from the barnyard into the life of Riley: comfy bathrobes, all the free pizza he can eat and all the telenovellas he can wrap his peepers around.

Nothing good lasts forever, of course, and Reggie’s luck runs out when he’s suddenly abducted by a strange turkey named Jake (Woody Harrelson). Jake has a plan: he wants to travel back in time, to the first Thanksgiving, and find a way to take turkey off the menu. Turns out he has a time-machine, by the name of S.T.E.V.E. (voiced by the legendary George Takei), and just needs a partner: whether he wants it or not, Reggie is tagged in and the way-back machine is set to Plymouth Rock.

Once there, Reggie and Jake run smack-dab into a big ‘ol conflict: turns out that the turkeys, led by Jenny (Amy Poehler) and Ranger (writer/director Jimmy Hayward), are currently in pitched battle with the Pilgrim settlers, led by the dastardly Myles Standish (Colm Meaney). Jumping into the fray, Reggie and Jake do what they can to help their turkey ancestors but complications keep arising, namely that Reggie has gotten googly eyes for Jenny. To add to their problems, Chief Broadbeak (Keith David), the turkeys’ wise and venerable leader, is a pacifist and won’t let his group take up arms against the murderous settlers. What’s a turkey to do? If you’re Reggie, Jake and Jenny: plenty, that’s what. Will the turkeys emerge victorious, standing as peers beside the humans rather than food on their plates? Will Reggie ever find the peace and solitude that he (thinks) he’s looking for? Will Jake ever take two minutes to think before he does something? Will there be any unnecessary pop culture references? (Spoiler: just one, as the ever-patient Native Americans remark that the turkeys seem like…”angry birds”…ugh)

From start to finish, Free Birds is a ton of fun. It’s a fast-paced, intelligent and, quite frankly, extremely funny film that relies on characterization and actually humorous situations to make its point. One of the best examples of this has to be the TV shows/commercials that Reggie watches early on. While the pizza commercial is deliriously good (for some reason, it almost reminded me of a Troma take on a pizza commercial), the telenovella is pure gold. For much of the film, Reggie considers himself to be an outsider, a “lone wolf,” as it were. As such, he identifies wholeheartedly with the telenovella’s cool, tough-guy lead, even though he bears not one white of resemblance to Reggie. It’s how he sees himself, however, which is all that matters. More importantly, it’s a great, smart bit of character development that also manages to be goofy good fun: talk about killing two birds with one stone.

Not only is the film genuinely funny, but it’s also got equal measures of big heart and wide-eyed wonder. While Takei is absolutely fantastic as S.T.E.V.E., the time-travel sequences, themselves, are a sight to behold, reminding me (no lie) of the interstellar travel scene in 2001 (1968). There was a genuine sense of wonder, something that I felt not only through the characters but through myself, as well. I may be an avowed outer space fanatic, granted, but I find it hard to believe that “normal” viewers wouldn’t be just as impressed.

Voice-wise, Free Birds is locked-down tighter than Fort Knox. Owen Wilson and Woody Harrelson are dependably good, as expected (although I wish that Woody was a bit more over-the-top, which is kind of what I expected, going in), but Amy Poehler is the real heart and soul of the production. Her Jenny is such a delightful, wonderful, cheerful, smart and strong character that I wonder why we don’t see her type in actual live-action films. Regardless, Poehler is marvelous: I dare any (sane) viewer to not fall in love with Jenny by the credit roll.

Even though Free Birds is very much a big, glossy, computer-animated production, I really enjoyed the look, finding it to be both surprisingly warm and delightfully detailed: there’s always something going on in the margins of the frame, giving the film a bustling, “alive” quality. While I’ve yet to see writer/director Hayward’s version of Horton Hears a Who (2008), I have seen his version of Jonah Hex (2010): while I wasn’t blown away, finding it to be fairly close to the forgettable Van Helsing (2004), it was still a bit better than other films of its ilk. Not much, mind you, but a bit. After being so impressed by Free Birds, I’ll definitely need to give Horton a shot, although I’ll probably stop short of re-examining Jonah Hex: some things are probably best left buried.

If you’ve got kids, or are just young at heart, you could do a whole lot worse than Free Birds. While the film is occasionally silly (the coda is particularly eye-rolling), it also packs moments of actual emotional heft, such as the dramatic scene where Standish’s men set the turkey tree on fire. The performances are energetic and fun, the themes are smart and timely and the whole thing ends with Social Distortion’s cover of CCR’s “Up Around the Bend” playing over the end credits: it’s almost like they looked right into my head.