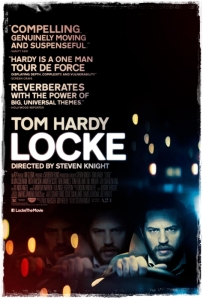 From time to time, I find myself presented with films that are a lot easier to respect and appreciate than to actually like: normally, this comes from intensely unpleasant, disturbing horror fare but I sometimes get this same experience from more traditional films, such as writer-director Steven Knight’s Locke (2013). While the film is exceptionally well-crafted and makes great use of its “one actor, one location” conceit, I found it impossible to connect with the main character on any meaningful level, rendering the film more of a style exercise than the dramatic character portrait that it obviously aims to be. Nonetheless, Locke ends up being a dazzling, if subtle, bit of craftmanship and gives Tom Hardy one more mildly intriguing character portrayal to add to his resume.

Hardy is Ivan Locke, the titular “hero” of Knight’s film, although “hero” is a bit of a stretch. More than anything, Locke is a man with his back to the wall, almost entirely thanks to his own doing. When we first him, Locke is leaving a construction site in the wee, dark hours of the morning, heading off for points unknown: the entire rest of the film will consist of nothing but the character driving, all interactions with other characters coming via his frequent phone conversations. Right off the bat, we’re thrown into the deep end, coming into the story in media res as Locke tries to deal with various problems, the chief one being thus: in the morning, he’s supposed to be overseeing the single largest concrete pour in European history (outside of military and nuclear installations) but he’s currently driving in the opposite direction, racing across town to a hospital. At the hospital, Locke’s middle-aged secretary, Bethan (Olivia Colman), is preparing to give birth to a child that’s the product of her and Ivan’s one-night stand. Determined to do “the right thing,” regardless of the consequences, Locke has promised to be there for the birth of the child, even though any problems with the construction job will cost his company upwards of $100 million, effectively wiping them from the face of the earth.

And then, of course, there’s the little issue of his family: neither his loving wife, Katrina (Ruth Wilson), nor his young sons Eddie (Tom Holland) and Sean (Bill Milner), have any idea that Ivan is about to blow their happy world apart. When Ivan calls his wife to explain why he won’t be home, the situation goes from zero to one hundred in seconds, with a devastated Katrina giving Ivan the ultimate ultimatum: get home now or don’t come home at all. Ivan is a “principled” man, however, and he’s determined to see his decision through to its necessary conclusion, even as his boss, Gareth (Ben Daniels) screams at him, his kids innocently relay details of a football game that Ivan should have been home watching and Bethan, whom Ivan slept with out of “sympathy,” proclaims her love for a man that she knows doesn’t care about her. As his personal life collapses around his ears, Ivan must also deal with his co-worker, Donal (Andrew Scott), as he tries to troubleshoot him through one work problem after another. Through it all, however, Locke seems to have one mantra running through his head: fix the job and he can fix his marriage. Life is never that easy, however, and as the night rolls on, Locke may just be running out of time…and luck.

Let’s get one thing squared away up front: Locke is a meticulously crafted film that provides a more than suitable showcase for the kind of understated performance that Hardy is capable of when not surrounded by CGI explosions. Cinematographer Haris Zambarloukos makes great use of the film’s one location, giving us plenty of beautifully-lit shots of the twinkling night outside Locke’s car, as well as the dark, dashboard-lit interior. The musical score, by Dickon Hinchliffe, is suitably droney and atmospheric, helping to add tension to scenes that are, literally, just Tom Hardy talking into a car phone. In all respects, Locke’s central conceit could have been its downfall but it ends up working spectacularly, similar to the coffin-locale of the Ryan Reynolds-starrer Buried (2010). Far from being a dull, monotonous affair, Locke is consistently engaging, albeit relentlessly straight-forward.

The biggest issue, at least as far as I’m concerned, is that Ivan Locke is never a sympathetic character: he’s a human wrecking ball whose strict adherence to an ill-defined code of “ethics” propels the film’s narrative in the same way that the T-rex got rid of those pesky raptors in Jurassic Park (1993). Ivan’s motivations are never clear: he obviously has no interest in Bethan and still feels a connection to his family, yet he consistently makes decisions that put him on opposite ends of the spectrum. While the film’s conclusion hints at a resolution, of sorts, the whole thing feels so unemotional and cold as to be largely academic: it’s as if Locke reasoned out the pros and cons of everything, tallied the results and came up with as scientific a response as possible.

This cold detachment sits at distinct odds with the film’s few moments of genuine passion: Locke’s angry explosion when he realizes that Donal is getting drunker by the phone call…the bit where tears roll down his cheeks as his son describes a football goal that couldn’t be less important in the grand scheme of things…these are the little moments, the sparks that threaten to bring Locke to glorious, blazing life, only for Hardy’s composed frown and slightly distracted demeanor to douse the flames. It’s often been said that Stanley Kubrick’s best films were cold and mannered to a fault: while I’ve never agreed with that particular criticism, it’s one that I can level at Locke without a moment’s hesitation…the film is cool, mannered and detached to a fault, bleeding away most of the impact in the process.

Knight, who also wrote and directed the dour Jason Statham-vehicle Redemption (2013), as well as the screenplay for David Cronenberg’s amazing Eastern Promises (2007), is an obviously gifted filmmaker who displays the same eye for the dark, neon-lit gutters of humanity that Nicholas Winding Refn does, albeit without Refn’s trademark deft touch. Despite feeling disengaged from the main character and emotional beats, Locke was always a pleasure to watch, a similar feeling that I had when I first saw Redemption. I’ll always be the biggest supporter of tricky, against-the-grain filmmakers you’ll run into, so there’s no way I won’t give Locke at least a recommendation, no matter how slight. That being said, I can’t shake the feeling that Knight’s sophomore production could have been so much more powerful if I…you know…actually cared about any of the characters. Style over substance? Perhaps but I’m more than willing to accept a ride from Knight the next time he decides to prowl the nocturnal streets.