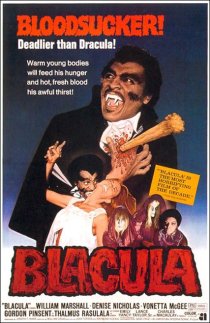 Of the many, many sub-genres available in the wide world of film, I must admit a certain fondness for the blaxploitation genre. I grew up on films like Shaft, Dolemite and Across 110th Street (one of my all-time favorite movies): I’ll stack any of these films up against whatever you’ve got. Blaxploitation horror, however, was always a bit of a dicier proposition. When done poorly, you ended up with travesties like Blackenstein (which we’ll review in a future segment) or goofy romps like Abby. Upon occasion, however, there were some real gems to be found here: Sugar Hill and J.D.’s Revenge are both atmospheric little chillers and Scream, Blacula, Scream is a minor classic. The best of the bunch, however, as well as the forefather of them all was William Crain’s Blacula.

Blacula begins in a fairly typical way for an American International production (Corman is definitely a spiritual forefather to the proceedings): a dark and stormy night at Dracula’s castle. The distinguished African Prince Mamuwalde (William Marshall) has sought an audience with Count Dracula in order to request his assistance in ending the slave trade to North America; Dracula, for his part, really likes his slaves and wouldn’t mind a few more. He turns on Mamuwalde, bites him, curses him (“I curse you with my name. You shall be…Blacula!”), seals him in a coffin and walls his wife up to starve to death in the tomb. In other words, this Dracula is pretty much a colossal, racist asshole.

An inspired animated credit sequence (seriously cool, maybe one of the coolest credit sequences ever, to be honest) leads into the present day, where a couple of the most outrageous gay interior designer clichés in the history of moving pictures are purchasing several items from Dracula’s castle (a Transylvanian yard sale?). They fall in love with the coffin, even though they haven’t opened it, and lug it all the way home to Los Angeles. Once there, Mamuwalde (now Blacula) rises from his centuries-long sleep and proceeds to break fast on our friendly duo. He then stalks the streets until he accidentally runs into Tina (Vonetta McGee), who just so happens to be the spitting image of his long-deceased wife. What’s a lonely vampire to do but court this lovely creature? Turns out Tina’s friends and sister aren’t too keen on the idea, especially after some sleuthing turns up the truth about Mamuwalde’s origins (for one thing, he lies about his age). Dr. Gordon Thomas (Thalmus Rasulala) teams up with Lt. Peters (Gordon Pinset) and the LAPD and they all attempt to run the bloodsucker to ground. This culminates in a chase through a warehouse and the ultimate act of melancholy acceptance.

As far as low-budget horror films go, Blacula is certainly no worse (nor much better, in certain ways) than many others. The film is actually much less gimmicky than it may sound, functioning more as another straight-faced, if slightly unoriginal, adaptation of Bram Stoker’s classic novel than anything else. Unlike Blackenstein, the majority of the cast in Blacula are black, with the majority of the white actors portraying the police. Cultural aspects are also interwoven much more organically through the story, from Prince Mamuwalde’s origins to the fantastically funky Afro-Cuban theme song.

In fact, for the most part, the film actually comes across as very low-key and highly respectful. William Marshall portrays Mamuwalde with a tremendous amount of dignity and nobility, as truly befits a Prince, and there’s very little in the way of slapstick humor (the interior designers are about as comical as it gets). Marshall, a trained Broadway and Shakespearian actor (as well as the King of Cartoons from Peewee’s Playhouse), actually worked with Crain and the producers to give his character a back-story, which certainly helps to elevate the story into the realm of tragedy rather than exploitation. The love story also feels genuine and not tacked on, something else that ties it in more intimately with the source material.

As befits a low-budget horror film from 1972, however, all is not smooth-sailing. The makeup, in general, is pretty bad but poor Blacula’s makeup is particularly awful: he basically just grows a widows-peak and unibrow. Some of the dialogue can be pretty silly (“Vampires multiple geographically.” “It’s a goddamn epidemic!”) and the gay characters are obviously very out-moded and rather derogatory. Everyone involved came from TV backgrounds, which definitely influences the overall look of the film (think Kolchak-esque production values). Marshall is pretty spectacular in the titular role, however, and the ending packs a pretty decent emotional wallop. All in all, Blacula ends up being one of the better low-budget vampire films out there and definitely worthy of a screening. Be forewarned, however: you’ll be humming the theme song and performing “air horns” for the next week straight.

Sometimes, it takes me a while to really connect with a movie. I may watch something a few times and appreciate it but it may take me a whole lot longer to actually like it. Take Fincher’s The Game, for example: I actively hated that film when I saw it in the theater but, after watching it several more times in the ensuing years, I’ve actually begun to like the movie. Give it another 10 years and I’ll probably love it.

Some films, however, hit me immediately, going straight to my reptile brain and setting up residence in my immune system. I fell completely head-over-heels for The Good, the Bad and the Ugly when I first saw it, for example and after finishing Taxidermia for the first time, I promptly started it all over again. It’s hard to tell why some things get to me more than others. I do know one thing, however: I fell instantly in love with Rob Sitch’s The Castle and it will, in all likelihood, become one of my favorite films in the future.

The Castle is an Australian film that could, for lack of a better term, best be described as a feel-good film. Right off the bat, we’re introduced to the Kerrigan family, an ultra-lovable clan of eccentrics. There’s Darryl (Michael Caton), the resourceful, ever-optimistic patriarch and his loving, supportive wife Sal (Anne Tenney) or, as their kids say, “If Dad is the backbone, Mum is the other bones.” We also meet their kids Dale, Steve and Tracey (Stephen Curry, Anthony Simcoe and Sophia Lee, respectively) and Tracey’s husband, Con (Eric Bana, in his screen debut). Another son, Wayne (Wayne Hope) is currently serving a prison sentence, not because he’s a bad person, but because he listened to the  wrong person. There is absolutely no sense of shame as far as Wayne goes: his family loves him just as much as if he were sitting before them.

And this, friends and neighbors, is what makes The Castle so completely, absolutely magical: these people genuinely love and respect each other! Fancy that: a family unit constructed of love, support and understanding, rather than sarcasm, irony and snarkiness…the mind practically buckles at the thought! These are quirky characters, to be sure, but they never lose one iota of their wonderful innocence and charm, regardless of how strange their actions might get or how much the world attempts to crush them down. For the world will, indeed, try to crush the Kerrigans.

Turmoil comes to their small suburban paradise in the form of a planned expansion by the next-door airport (literally next-door, as in “two-feet-from-their-backyard” close). Their property, along with their neighbors’ properties have been seized under eminent domain laws and they’ve been offered a cash settlement and told to hit the road. Only problem is, Darryl Kerrigan loves his home: it may look cheap, stitched together and decidedly middle-class to outsiders but it’s where he raised his family, it’s where all of his memories are and it’s his home, dammit! He rallies his neighbors, who all pledge to put up a united front. As his neighbor Farouk (Costas Kilias) makes clear, things can always be worse: “He say plane fly overhead, drop value. I don’t care. In Beirut, plane fly over, drop bomb. I like these planes.”

When he can’t get anyone to listen, Darryl enlists the aid of the lawyer who represented Wayne, despite his lack of knowledge in constitutional law cases (“I can’t do this!” “You defended Wayne.” “And he got eight years!”) and proceeds to take the case as far as he can. Along the way, he happens to join forces with a former Queens Council barrister, a legal eagle who just may have the know-how to send the government packing. The whole thing climaxes in a thrilling courtroom dance between the barrister (Charles Tingwell) and those who would deny a man the simple right to raise his family.

The Castle is one of those films that, as mentioned above, I just fell in love with right off the bat. The humor is rapid fire and genuinely funny (blink-and-you’ll-miss-it moments include the super-thin pool table built into the too-small room and Dale’s outrageously useless inventions) and the dramatic moments actually feel real, not tagged on. The acting is absolutely impeccable, especially from Michael Caton: I not only felt like I knew Darryl but I genuinely wanted to spend time with him. This, in a nutshell, is the beauty of the entire film: this is a group of people who genuinely love and care for each other. As a family unit, they are nothing but positivity, acceptance and love. My favorite example of this comes from the family’s dinners, where Darryl constantly extols the virtue of his wife’s cooking: “What do you call this, then?” “Chicken.” “And it’s got something sprinkled on it.” “Seasoning.” “Seasoning! Look’s like everybody’s kicked a goal!” Moments like this could come across as silly and treacly in the wrong hands but the film is so pitch-perfect that it all comes across as sweet rather than cloying.

In fact, the absolute best compliment that I can pay The Castle is that I really didn’t want it to end. I could have probably enjoyed the Kerrigan’s exploits for another two or three hours but the 85 minutes I spend with them was way too short. I was going to compare The Castle to another go-to feel-good movie of mine, The Full Monty (a comparison which the box art even takes pains to mention) but I honestly believe that The Castle is the far superior film. The Full Monty, as great as it is, still has a tendency to manipulate and play with our emotions and expectations. The Castle, on the other hand, just presents a group of really likable characters and asks you to come along for the ride: that’s an invitation I’ll accept anytime.