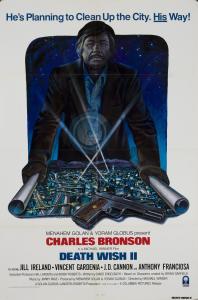 When we last left everyone’s favorite vigilante, Paul Kersey (Charles Bronson), he had just finished avenging the rape of his daughter and murder of his wife by blasting half the criminal population of New York City straight to kingdom come. After being given a one-way ticket to Chicago by the NYPD (rather than reveal their complicity in not locking him up), we get the notion that Kersey won’t be any less forgiving to the Windy City’s scum than he was to the Big Apple’s. What’s a guy like this do for an encore?

As it turns out, he goes to Disneyland. Well, not quite: he actually goes to Los Angeles, which was probably a lot closer to New York City in the dawning years of the ’80s than it might care to admit. Our lovable avenging angel’s next act, the follow-up to 1974’s Death Wish, would be Death Wish 2 (1982). As with most sequels, Death Wish 2 would attempt to up the ante on the first film, featuring a more graphic rape scene, a more cold-blooded vigilante and a more over-the-top, ineffectual police force. The film would feature the same director, action-auteur Michael Winner, and a musical score by Zeppelin’s Jimmy Page that featured more guitar solos than a ‘Battle of the Bands’ competition. Death Wish 2 would also do something a little more insidious: by jettisoning Kersey’s previous moral quandaries, the film would place its sympathies almost wholly in the Dirty Harry (1971) school of “shoot first, ask questions later.” Rising crime rates…street gangs…the average citizen running in terror from armed lawlessness? Welcome to the ’80s, Paul: enjoy your stay!

When we meet Paul Kersey again, not much has changed since the fist time, aside from the location. He’s still an architect, he’s still taking care of traumatized daughter, Carol (Robin Sherwood) and he’s still got a romantic interest, albeit a new one: reporter Geri Nichols (Bronson’s real-life spouse, Jill Ireland). He’s also the same take-no-shit asskicker that he was before, as we see when he runs afoul of a highly colorful gang of street toughs, led by the squirrely Nirvana (Thomas Duffy) and counting one Laurence Fishbourne III among their august ranks (his absolutely insane sci-fi shades deserve their own film franchise, perhaps some kind of interstellar private-eye thriller).

The gang lifts Paul’s wallet and decides to head to his place to enact a little “justice” over his rough treatment of Jiver (Stuart K. Robinson). When they don’t find Paul at home, they opt for gang-raping his housekeeper, Rosario (Silvana Gallardo), in what has to be one of the most vile, protracted and gratuitous rape scenes in the history of cinema. When Paul and Carol return, the gang knocks him unconscious, shoots Rosario dead and takes Carol captive. After yet another gratuitous rape scene, Carol jumps through a plate-glass window and ends up impaled on a wrought-iron fence. Needless to say, this sequence of events pushes poor Paul over the edge and he takes to the streets once again, intent on hunting down and slaughtering the animals responsible for brutalizing Rosario and Carol.

To complicate matters, the same NYPD chain-of-command who let Kersey go in the first movie get wind of his recent activities in L.A. and begin to get a little worried: if Kersey gets caught, he might decide to blab about the NYPD opting to shuffle him out of town rather than do the paperwork. In order to prevent this, they send Detective Frank Ochoa (Vincent Gardenia), Kersey’s foil from the first film, to Los Angeles in order to permanently deal with the problem. The only problem, of course, is that Ochoa doesn’t necessarily think Paul’s doing anything wrong. Neither do the citizens of L.A., for that matter, as they cheer on their vigilante hero in the same way that the New Yorkers did almost a decade earlier. Will Paul put down his weapons of war before he loses the rest of his humanity or have the bad guys pushed him too far this time? One thing’s for sure: the scum of Los Angeles have a death wish…and Paul Kersey’s just the guy to grant it.

One of the biggest issues involving sequels is usually the disparity between the first and second films in a series: in many cases, different creative personnel handle the various films, particularly if they were never conceived as a unified “series” in the first place. Death Wish 2 avoids this pitfall, in part, by having Michael Winner return as director: both Death Wish 2 and its predecessor share a similar aesthetic and feel (despite swapping the first film’s cinematographer, Arthur J. Ornitz, for Part 2’s team of Tom Del Ruth and Richard H. Kline) which definitely helps to weld the films together. Unlike the completely over-the-top Death Wish 3 (1985), the second film still has enough of the first’s DNA to seem like a natural succession rather than just another product.

As mentioned earlier, however, Death Wish 2 certainly fulfills the stereotype of sequels in one big way: there’s more, more and more of absolutely everything here. While the rape scenes are more prolonged and nasty than the first film, the personalities of the various gang members are also bigger and more outrageous than the original. Keyvn Major Howard’s “hardcore Hare Krishna,” Stomper, could have been lifted directly from The Road Warrior (1981), while Thomas Duffy’s Nirvana gets one particularly ludicrous bit where he plows through several dozen cops as if he were an exceptionally pale version of the Incredible Hulk. While the gang from the first movie (which included an appropriately bug-eyed Jeff Goldblum) weren’t exactly the picture of restraint, the creepoids in Part 2 are one slim pen stroke away from complete comic book territory.

The political commentary is also much more pointed and one-sided than in the previous film. Gone are Paul’s “bleeding-heart liberalisms,” replaced by the kind of steely-eyed disdain for criminal lives (and rights) that mark any good ’80s crime fighter. Right from the get-go, we get talking heads and worried news reports that not only talk about the escalating crime rates but compare the whole situation to “being struck by an enemy bomb.” This is war, according to the film, and it’s us or the bad guys. Unlike the first film, there’s no need for hemming and hawing on Kersey’s part: he already did the heavy emotional lifting last time…all he has to do, here, is load the gun and pull the trigger, as many times as necessary.

Not only is Death Wish 2 a much nastier film than its predecessor but it also marked a shift in Bronson’s career from his earlier tough-guy ’70s roles into films that were much bleaker, more explicit and all-around more unpleasant. After Death Wish 2, Bronson would go on to 10 To Midnight (1983), The Evil That Men Do (1984), Death Wish 3 (1985) and Kinjite (1989), all regarded as some of the nastiest “mainstream” thrillers to hit in an altogether over-the-top decade.

Despite my lifelong appreciation for Death Wish 3 (oddly enough, it was one of the films that my father and I found ourselves watching the most, over the years, possibly due to the overt cartoonishness of it all), I’ll readily admit that Death Wish 2 is the better film. In many ways, I equate the first two films in this series to the first two films in the Halloween series. Carpenter’s original, like the first Death Wish, was a lean, mean statement of purpose, a film that was just as much art as exploitation, with very few frills and a simple, but effective, structure. Halloween II (1981), like Death Wish 2, has a very similar aesthetic to its predecessor yet manages to be much bleaker, more explicit and, arguably, less fun. The direct sequels also added storylines that made the inherent structure more complex, if not necessarily better (the Det. Ochoa bit never really amounts to anything and is, in and of itself, a pretty massive plot-hole), something that’s also par for the course with most sequels.

At the end of the day, Death Wish 2, like its predecessor and the vast majority of these ultra-grim and graphic ’80s crime thrillers, is always going to be an acquired taste. Whereas the Dirty Harry series always traded on Eastwood’s ever-present snark and way with a quip, the Death Wish series (at least for the first few entries) was a much more dour affair. While both series’ trade on the notion of a world run rampant and in serious need of an ass whuppin’, the underlying point behind the Death Wish series seems to be thus: your loved ones will be cut down in front of you, no one will help and it will be up to you to avenge them. In many ways, it’s easy to see the character of Dirty Harry as being a sort of right-wing superhero (for the record, despite any personal inclinations, Dirty Harry will always be one of my personal heroes), while the character of Paul Kersey is much muddier and more complex.

When he started out, Paul didn’t want to kill but felt he had no choice. Here, we get the first inclinations that he’s begun to develop a taste for it. By the time we get to the third film, where he gleefully blows a reverse-mohawked punk through the side of a building with a rocket launcher, we’d be forgiven for thinking that he’s getting a kick out of it. Is that progress? I’ll let you be the judge.