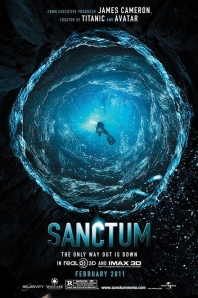 As of late, James Cameron is more known for his mega-budget event pictures, like Titanic (1997) and Avatar (2009), than he was for the more intimate sci-fi that originally put him on the map: The Terminator (1984), Aliens (1986) and The Abyss (1988). By this point, especially with three more Avatar sequels in the works, we pretty much know what to expect from Cameron: cutting-edge technology, huge budgets and stereotypical characters lurching through melodramatic storylines. In many ways, Cameron is one of the best examples of “style over substance”: while Avatar signaled a bold, new era in Hollywood special effects, the film, itself, was as middle-of-the-road as possible. Cameron’s films have a tendency to look like a million bucks but are usually plotted like something from the $0.99 bin at the video store (when they still had video stores, of course).

With this in mind, I went into Sanctum (2011), which Cameron executive produced, with no small amount of trepidation. Truth be told, I haven’t actually enjoyed one of Cameron’s films since Terminator 2, all the way back in 1991. Despite this hesitation, a few things compelled me to press forward. First of all, Cameron was only the executive producer, not the writer or director, which meant that his creative input might be minimal. Second, Sanctum is about underwater cave exploration, which has been a particular interest of mine (and Cameron’s, apparently) since I was a kid: I very rarely miss an opportunity to watch any underwater thrillers, regardless of who’s involved. Thirdly, with Cameron executive producing, I expected the film to be technically impressive, which would certainly satisfy the fan-boy in me. What I ended up with, ultimately, was a film that managed to meet all of my expectations, for better or worse: the film looks gorgeous, featuring truly stunning underwater cinematography and great locations, but is also melodramatic, with workmanlike acting and trite characterizations. In other words: Sanctum is a real triumph of style over substance…how positively Cameronian!

Josh McGuire (Rhys Wakefield), son of world-famous underwater cave explorer, Frank McGuire (Richard Roxburgh), is late in meeting his father for a dive into the largely unexplored Esa-ala cave system, in the South Pacific. Since father and son already have an extremely contentious relationship, this is just one more issue to add to their already full-plate: the biggest issue, however, appears to be that young Josh just doesn’t care for underwater exploration. Once he gets to the site, we meet the other main players: Carl (Ioan Gruffudd) and his girlfriend, Victoria (Alice Parkinson) and Frank’s team: George (Dan Wyllie), Judes (Allison Cratchley) and Luko (Cramer Cain). Carl is the money-man who’s funding Frank’s expedition, which puts him in constant conflict with the gruff caver. The stage is set for confrontations, conflicts and lots of familial drama…plus some pretty spectacular sight-seeing, of course.

Frank and his crew have a particular goal: they want to traverse the unexplored cave system and find the outlet to the ocean that Frank knows must exist. During the dive, however, disaster strikes and Judes ends up drowning, a tragedy that Josh blames his father for since Frank was the one who had her dive for so long. To add more drama, a killer storm is blowing in and the crew needs to get out of the area before they’re trapped there. Frank is stubborn, however, and the storm rolls in, pinning them down in the cave system. At this point, the path is clear: the only way out is through. With time running out and additional conflicts popping up left and right, Josh and Frank must find their way out of the cave system or die trying. For the first time in a long time, father and son must overcome this issues and work together or the Esa-ala will become their watery tomb.

As mentioned above, Sanctum looks absolutely gorgeous: the film was originally released to theatres in “Real 3D” and I’m sure the experience was suitably eye-popping. The Esa-ala cave system is truly amazing (much of the movie was filmed at the iconic Cave of Swallows) and the underwater cinematography is always crystal-clear. There are also plenty of well-staged action set-pieces, including a genuinely thrilling bit where the crew rappels down a hazardous drop-off. While the film is not always a non-stop rollercoaster, there’s plenty of decent action here. The main problem, as also stated above, is that everything else about the film is strictly bargain-basement. In many ways, the film resembles a really expensive TV movie, full of melodrama, iffy acting and irrational character motivations. Rhys Wakefield is particularly bad, as Frank’s standoffish son: the character vacillates between sounding like an obnoxious, whiny teenager and trying to fill action hero boots that are way too big for him. While Richard Roxburgh is decent, as Frank, Ioan Gruffudd is completely over the top, as the thrill-seeking Carl. Sanctum is full of “low moments” but many of the worst belong to Gruffudd: the moment where he melodramatically leaps into the water is such an eye-roller that I could see the bottom of my brain and his devolution into “stock bad guy” is handled with as much grace and subtlety as a sledgehammer smacking a house fly.

Ultimately, Sanctum is about one-third of a good film and two-thirds of purely middle-of-the-road dreck. For anyone who’s interested in cave or underwater exploration, Sanctum features plenty of great locations and some really exceptional photography. For anyone who’s interested in all of the other things that make a film watchable, however – things like storyline and acting – Sanctum comes up severely deficient. Seems like my original impression was dead on the money: Sanctum looks great but has as much substance as a Twinkie. In other words, classic modern-day Cameron.