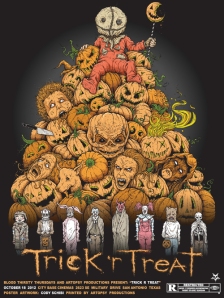 What is the true meaning of Halloween? I don’t mean the historical origins, mind you: we could sit and debate pagan ceremonies, harvest festivals, etc…til the cows come home and still not get any closer to the actual answer. As we should all know by now, holidays have a way of shedding their original meanings over time, of morphing into decidedly different entities than they once were. Just as the concept of Christmas has, over time, become more secular/commercial and increasingly divorced from its religious origins, so, too, has the concept of Halloween lost much of its pagan origins and become something much more universal.

But none of this answers the original question: what, exactly, is the true meaning of Halloween? If I may be so bold, I think that I have the answer. Halloween is ghosts and curses, trick or treating and costumes. It’s parties, pranks, candy, the color orange and the long, slow death of Fall. Halloween is the one time of the year where everyone in the world, horror fans and neophytes alike, relish every possible opportunity to scare themselves senseless. Halloween is about ancient traditions, scary movies and jack-o’-lanterns.  It’s about becoming someone/thing other than what you are, if only for a night. Halloween is all about having fun…but it’s also about the realization that death is only ever a stone’s throw away, hiding off in the shadows to pounce on the unwary. What is Halloween? Halloween is writer-director Michael Dougherty’s flawless Trick ‘r Treat (2007), a film that manages to encompass everything great and terrible about the holiday into one neat little package. Think of Trick ‘r Treat as the equivalent to A Christmas Story (1983), one of those films that just sums up a time of year so perfectly that you can’t imagine celebrating without it.

Structurally, Trick ‘r Treat is an anthology film, albeit one more like Pulp Fiction (1994) than Creepshow (1982): rather than feature several separate stories, one after the other, all of the tales in Trick ‘r Treat are interwoven together. Characters from one story appear in the periphery of other segments: incidents seen from one angle are given a 360-view once we’re privy to all the details. The effect, quite frankly, is stunning: Dougherty creates such a unified vision that Trick ‘r Treat ends up being one of the most three-dimensional horror films ever…we really get to know the characters involved because we see so many different facets of them. The one constant that unites it all? The ever-present specter of Halloween and the diminutive, instantly classic presence of Sam, one of the greatest modern horror creations in recent memory.

Sam, clad in what appears to be a scarecrow’s garb, complete with burlap-sack mask, flits into and out of each of the film’s various stories. The stories themselves, ranging from a young woman’s (Anna Paquin) sexual awakening to the tragic story of a school bus full of drowned children, are familiar but are all given unique twists and turns courtesy of Dougherty’s exceptional script. Sam, the very embodiment of the holiday, serves a variety of roles throughout the film: avenging angel, detached observer, gleeful participant, mischievous prankster, cold-blooded killer.  We never know quite when or where he’ll pop up next but pop up, he always does, ready with a rakish tilt of the head and that terrifying lollipop-knife of his.

I mentioned earlier that Trick ‘r Treat is a flawless film and I stand by that bold admission: there’s absolutely nothing about the film that ever takes me out of it for even a moment and each viewing ends with the desire to start the whole thing over. The acting…the filmmaking…the script…even the opening credits, styled like an old EC Comic, ala Creepshow…are all absolutely perfect. It’s quite handily become one of my favorite films and is one of the few movies that I can unequivocally recommend to anyone, regardless of individual tastes: if you like movies, you will like Trick ‘r Treat…I guarantee it, as Justin Wilson used to say.

From a filmmaking standpoint, Trick ‘r Treat is absolutely gorgeous and brilliantly made: the production design and art direction (by Mark Freeborn and Tony Wohlgemuth) are simply stunning, especially in eye-popping scenes like the yard full of jack-o’-lanterns or the ridiculously creepy scene where the kids find the half-submerged school bus. Glen MacPherson’s cinematography is nothing less than beautiful, giving the film a feel that’s pitched halfway between Wes Anderson and Sam Raimi. Truth be told, Trick ‘r Treat’s entire mis en scene reminds me of Anderson’s work (or, perhaps, even the work of legendary filmmaker Peter Greenaway): every scene and shot is so immaculately composed that it almost feels as if one has stepped into a perfect, miniature diorama.

Ultimately, there’s not a whole lot more for me to say about the film: I love it unconditionally and that’s pretty much all there is to it. Prior to seeing Trick ‘r Treat (which was inexplicably dumped straight-to-DVD after being delayed for years), I had always considered Carpenter’s classic Halloween (1974) to be the perfect representation of the season. There’s so much care and craft in Dougherty’s feature-debut, however, such a complete and genuine love for all things Halloween, that it’s impossible not to see Trick ‘r Treat as the ultimate Halloween film, bar none.

What is Halloween? Quite simply, Halloween is Michael Dougherty’s Trick ‘r Treat: all hail the Pumpkin King and long may He reign!