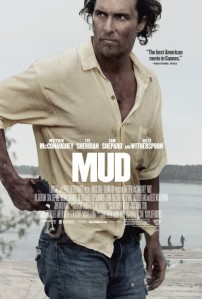 Fun is fun, when it comes to movies. There’s nothing wrong with mindless action shoot-em-ups or faceless slashers: those are usually more fun than being night watchman in a bubble-wrap factory. Lots of adrenaline, some snappy dialogue and some rousing set pieces…that’s been a sure thing for quite some time. Likewise, mega-budget “event” pictures can be mighty entertaining, in the right doses. Throw a bakers’ dozen of the biggest actors in town into the cinematic equivalent of making your He-Man figures fight your GI Joes? Don’t bother to call: I’m already out in the lobby. That being said, there’s a lot to be said for a good old-fashioned, low-budget, character-driven drama. Sometimes, there’s nothing finer in life than getting a bunch of talented actors together and letting them do what people have been doing since the dawn of time: live. Jeff Nichols’ Mud may not be flashy but it’s a mighty fine coming-of-age film and an intriguing peek into the human condition.

Our film begins on the waterways of Arkansas, as we’re quickly introduced to our young protagonists, Ellis (Tye Sheridan) and Neckbone (Jacob Lofland). They’re a couple of precocious teen boys, best friends and the products of rather fractured homes: Ellis’ mother and father (Sarah Paulson and Ray McKinnon) are at each other’s throats, the harshness of the country and the financial uncertainty of their riverboat existence tearing the family apart, while Neckbone is being raised by his uncle Galen (Michael Shannon) and never knew his parents. One day, while exploring a nearby island, the boys come across a busted-up houseboat, inexplicably beached atop a tree. Boys being boys, they decide to poke around the abandoned boat and discover evidence that it might not be so abandoned: bread, cans of beans and a few nudie magazines. In short order, the lads are introduced to the boat’s current “resident,” a scruffy hobo who calls himself Mud (Matthew McConaughey). According to Mud, he’s waiting for his girlfriend, who he describes to the dubious boys as “long blonde hair, long legs…beautiful…nightingales tattooed on her hands.”

Ellis and Neckbone doubt Mud’s story almost absolutely, right up until the point where they notice that a mysterious young woman (Reece Witherspoon) has just showed up in town, a woman who happens to be blonde and have nightingales tattooed on her hands. She looks an awful lot like Mud’s description, leading the friends to believe that the hobo might be telling the truth, after all. As the trio get friendlier, Mud reveals more and more about his backstory, including the fact that he’s on the run from some pretty bad people. As the boys help Mud get the houseboat up and running and serve as messenger between him and Juniper, they also contact an old friend of his, Tom (Sam Shepard), a mysterious older man who seems to know an awful lot about Mud’s past. As these disparate elements come crashing together, the boys must also maintain their home lives and deal with the conflicting emotions of adolescence: in Ellis’ case, this means falling in love with a high school girl (Bonnie Sturdivant) and navigating the pitfalls of young hormones, while Neckbone must balance his own need to become an independent man with his desire to help his uncle. Everything comes to a head as malevolent forces descend on the small town, intent on making Mud atone for his past as the boys are forced into the first throes of adulthood.

Despite some latter-half action elements that move the film more in the direction of Straw Dogs (minus the rape) than a Boy’s Story, Mud is most certainly a coming-of-age drama. Although the film, ostensibly, is about Mud and his quest for love and redemption, these aspects are always balanced against the larger picture of Ellis and Neckbone growing up. In fact, the more explicitly action-oriented elements (despite being decidedly audience-amping) have an unfortunate tendency to drown out the more mature dramatic aspects that precede them. While it’s certainly rousing to watch McConaughey whup ass righteously, the finale ends up seeming a bit reductive, almost as if the romantic/dramatic elements were a sort of smoke-screen for the more standard action beats. This is doubly unfortunate since, up to that point, Mud as a slow, meditative feel that lends itself more to contemplation than to increased adrenaline.

Acting-wise, the film features an embarrassment of riches, not the least of which is another rock-solid, dependable performance from good ol’ Matthew McC. Sheridan and Lofland are outstanding as the teenage protagonists and there’s never a moment where their friendship feels anything less than genuine. While Sheridan has to do a bit more of the emotional heavy-lifting than Lofland does, owing to Ellis’ slightly more central position in the narrative, neither actor is a slouch: I predict really good things for both of these actors. On the more established, old-guard end, we have excellent turns from Sarah Paulson as Ellis’ mother Mary Lee: she really makes the terrible conflict between what she wants and what her family wants a concrete thing and her interactions with Ray McKinnon frequently have a heartbreaking sense of authenticity. Nichols’ regular Michael Shannon is typically sturdy as Neckbone’s uncle, leading me to reiterate the same thing I always say whenever he’s in a film: get this guy more roles. Joe Don Baker shows up in a small but pivotal role as the grieving father/unrepentant killer and Paul Sparks oozes real menace as his second-in-command.

Writer/director Jeff Nichols has, very quietly, begun to build up quite the impressive resume. His debut, 2007’s Shotgun Stories, was a gut-punch about the special hell that only family members can put each other through and featured a scorching lead turn from Michael Shannon. Nichols followed this up with Take Shelter (2011), another Michael Shannon-starrer, about an average, everyday, Midwest man confronting the dubious possibility that he’s either envisioning the end of the world or is going completely bonkers. Across his three full-length features, Nichols has proven especially adept at examining the ways in which small-town folks are torn asunder by extraordinary circumstances. Some are able to regroup and rebuild…others are completely and utterly washed from the face of the earth. Even though Nichols may not have many films under his belt, he’s revealed himself to be an extraordinary filmmaker with a keen, razor-sharp edge and a knack for upending the stone of Middle American life and examining the squishy bugs beneath. In many ways, Nichols is like a softer-edged, more humanistic version of modern-day Cronenberg: they both plumb the rural interstates and byways of America, looking for the reasons behind the madness. Their America might not look like a Rockwell painting but it’s home, nonetheless.