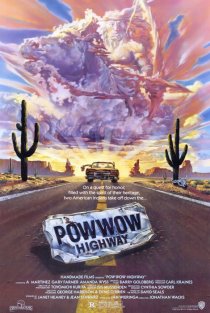 Finding one’s own identity and sense of self can be a daunting task under the best of circumstances. Some people may spend their entire lives “discovering” themselves, while others seem to know just who they are from a relatively young age. To make matters even more complicated, notions of self and personal identity also come not only from our internal communities but from the larger global communities around them. It can be hard enough to know who you are without the media and entertainment organizations constantly tossing in their own ten cents.

If finding one’s own place in the world can be difficult enough under the best scenarios, how much more difficult must it be when one has been marginalized, made to be an outsider in one’s own home? What if the surrounding culture, the “dominant culture,” as it were, was not only radically different from yours but, in some cases, diametrically opposite? In the case of the United States’ Native American population, this has often been the case. Jonathan Wack’s buddy pic, Powwow Highway, examines this concept of the search for personal identity while wrapping it within an easy-going, often meandering but ultimately entertaining road-trip framework. Powwow Highway isn’t a perfect film but it is an incredibly likable one and a surprisingly wry one, at that.

Philbert (Gary Farmer), a sweet-natured but naive member of the Northern Cheyenne, lives on a reservation in Montana. One day, he sees a blatantly racist TV commercial for a local car dealership and decides to head over and “pick out his pony.” When he gets there, the dealership is a bit less impressive than the commercial made it seem (read: filthier than the repo-shop in Repo Man) but Philbert is still able to trade some weed, a little whiskey and five bucks for his very own “pony”: a beat-to-shit, rusted-out junker that looks like a contemporary to the Edsel. Despite looking like it will require foot-power, ala the Flintstones, Philbert is ecstatic and sets out on his very own vision quest, in pursuit of becoming a warrior. As luck would have it, he finds a road-partner in Buddy Red Bow (A Martinez), a hot-headed local activist who’s involved in a bitter dispute with a local mining company. They want in, Red Bow wants them out and he’s just passionate and fiery enough to rally the residents.

The mining company, however, plays dirty pool and they’ve figured out a pretty sure-fire way to get rid of the pesky activist: plant drugs on his estranged sister, Bonnie (Joanelle Nadine Romero), get her arrested in New Mexico and wait for Red Bow to go bail her out. In the meantime, they’ll be free to work their magic minus his less-than-passive resistance.  Red Bow meets up with Philbert and, together, the two set off on their respective missions. Red Bow doesn’t have a lot of respect (or patience) for the patently old-fashioned Philbert, finding his stories about the old days and desire to be a warrior to be pretty silly delusions. Philbert, for his part, thinks that Red Bow has lost his way and needs to be reminded of his ancestry. Together, the two meet a collection of colorful characters on the road, including Bonnie’s kooky best friend, Rabbit (Amanda Wyss), another Native American activist named Wolf Tooth (Wayne Waterman), a stoic but frightening Vietnam vet (Graham Greene, in a very early role) and a hunky, girl-crazy stud named Buff (Wes Studi, in one of his first roles, before his breakout in the following year’s Dances With Wolves). Together, this motley crew helps get Red Bow closer to freeing his sister and Philbert closer to becoming a warrior.

At its heart, Powwow highway is anchored by Gary Farmer’s massively impressive performance as Philbert. Without a doubt, Farmer is the true heart and soul of the film, imbuing Philbert with a completely intoxicating mix of childlike enthusiasm, righteous indignation, pride, fear and anger. There are a million ways that a character like Philbert could be portrayed: wounded, silly, self-righteous, a martyr, a savior, an idiot savant. It’s to Farmer’s great credit that he plays Philbert as, quite simply, a complex and completely real human being. At no point does Philbert ever come across as merely a symbol or a stand-in for the film’s message. Even when the magical-realist element of the film is at its highest, such as when Philbert repeatedly sees the Native American warrior in traditional tribal garb, Farmer always makes sure that Philbert’s feet remain firmly on the ground. Despite his constant sunny nature and optimism, Philbert is no Pollyanna: the scene where he grabs and shakes Red Bow is sobering because it’s exactly what we want to do, in that situation.

A Martinez’s Red Bow, while hitting a few more stereotypical character notes then Farmer does, also turns in a great performance. With any other co-star, Martinez’s gruff, passionate activist would be the one that the audience can’t take their eyes off of. Despite his central status in the storyline, however, this is definitely Philbert’s story: Red Bow is, effectively, riding shotgun throughout the film. The rest of the performances are equally assured: Studi is a hoot as the perpetually horny Buff and Greene is quietly powerful as the shattered Vietnam vet. If anything, his scant screen time is the film’s biggest disappointment, since it leaves you wanting more: he says more with a look and a downcast stare than most actors do with a monologue. Wyss (Judge Reinhold’s girlfriend in the seminal Fast Times at Ridgemont High) is fun as Bonnie’s nutty friend but the character ends up being pretty superfluous to the action and doesn’t seem to serve much point.

Idea-wise, Powwow Highway gives plenty to think about. From a filmmaking standpoint, however, things are a bit murkier. For one thing, the film’s soundtrack is pretty awful: it may be 1989 but the synthy keyboard dreck on display reminds of the cheesiest excesses on the beginning of that historically cheesy era. Even the U2 song that runs over the closing credits is schlocky and under-whelming, continuing the unfortunate musical trend.

The film also seems to be fairly low-stakes: despite any of the situations that the characters find themselves in, there never seems to be a genuine sense of danger to anything. The effect is similar to watching weekly episodes of MacGyver: regardless of the size of the bomb, you know Mac’ll be there next week. Similarly, it’s hard to get too invested in situations like Philbert busting Bonnie out of jail (ropes tied to the window-bars, just like in an old Western) or the group being pursued by the entire Sante Fe police department, since everything seems so low-key. Even a potentially tear-jerking finale is ultimately rendered into a happy ending: despite its refusal to pull punches, Powwow Highway seems inordinately determined to please its audience, at all costs.

Ultimately, Powwow Highway ends up being a fun, energetic but slightly weightless film. While there’s an awful lot to like here (Farmer’s performance, the quirky situations, the authentic setting) and only a few real missteps (the awful score. the occasionally dingy cinematography), the film doesn’t seem to have a ton of substance. Perhaps less reliance on Red Bow’s story and more emphasis on Philbert’s quest to become a warrior would have helped: even the film doesn’t seem particularly interested in the resolution of the stale mining subplot, since it never even bothers to actually resolve it within the framework of the film. The real drawing point here is Farmer’s fearless performance. He may have played Nobody in Dead Man, but Farmer proves that he’s the big somebody at the heart of this little world.