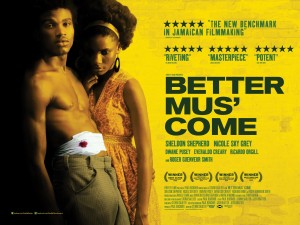 For many people who came of age during the Cold War, the threat of another world war and/or nuclear annihilation was a near constant, if ultimately theoretical, source of worry. Western-bloc school children were put through safety drills, fall-out shelters were built and political rhetoric was tossed around fast and thick from both sides. In some countries, however, the Cold War was more than just an ideological battleground: in places like Jamaica, during the ’70s, people were actually killing (and being killed) for this “battle against Communism.” For some, the Cold War was as physical and real as their often difficult living situations.

First-time writer/director/cinematographer Storm Saulter’s bracing debut feature, Better Mus’ Come (2010), examines this very “heated” side of the Cold War, wrapping the conflict up within the familiar trappings of a coming-of-age story. In the process, Saulter comes up with a film that flirts with greatness, even as it narrowly misses the lofty mark set by the similar City of God (2002). Despite not being a classic, Better Mus’ Come is a fairly extraordinary film, full of some painfully real performances, all surrounded by the inherent majesty of Jamaica’s picaresque countryside and humble shanty-towns slums. It’s a vibrant, lively, colorful place occupied, thanks to Saulter, with some truly interesting characters.

Better Mus’ Come begins in 1978, as Jamaica is in the grip of the Cold War: the slums are caught up in the often violent conflict between rival gangs working for the People’s National Party (PNP) on one side and the Jamaica Labor Party (JLP) on the other. Our protagonist, Ricky (Sheldon Shepherd), is a proud Laborite: he sees himself as a freedom fighter devoted to keeping the “Communist threat” out of Jamaica. “Let them take that shit to Cuba,” he proudly sneers at one point in the film. Along with his role as de facto leader of his local gang, a crew which includes his friends Flames (Ricardo Orgil) and Shorty (Everaldo Cleary), Ricky is also responsible for taking care of his young brother, Chris, a task made exceptionally difficult by their nearly crippling poverty. Like many of the residents of their shanty-town, Ricky and Chris don’t even have access to clean, running water, much less luxuries like electricity and “real” building materials. In one of the film’s most telling scenes, Ricky complains about their lack of amenities to the corrupt local politician who employs them, only to be answered with the dismissive notion that “people shouldn’t expect that kind of stuff.” We could go back and forth on the need for electricity but clean water? That seems like the kind of need that supersedes any notions of social status or wealth: everyone, regardless of station, should have access to clean water.

In his own way, however, Ricky is like a young, impoverished Don Corleone: he practically runs his neighborhood, watching out for residents who are getting crushed by strictures like food rationing and mercurial local authority figures. Ricky and his gang make their money by disrupting PNP rallies and raiding “legitimate” construction sites in order to steal and re-sell the supplies, while still finding time to run out any “Socialists” that manage to wander into the area. When Ricky’s gang jumps and nearly kills Pauly, a nerdy young man who kind of/sort of runs with the Socialists, Ricky gets introduced to Kemala (Nicole Sky Grey) and it’s love at first sight. As with any troubled romance (think Romeo and Juliet or the Hatfields and McCoys), all signs and advise point to Ricky and Kemala staying as far away from each other as possible: Ricky’s peers counsel him to “stay away from Socialist girls,” while Kemala and Pauly are intrinsically intertwined with brutal Socialist gang leader Dogheart (Duane Pusey), a sort of small-town Napoleon who’s always “all-in to kill some fools.”

As Ricky and Kemala timidly negotiate their highly hazardous courtship, events come to a head for both the Laborites and the Socialists. Local entrepreneur Souls (Dennis Hall) wants to pay Ricky and his gang to guard the same construction sites that they’ve been ripping off, a curious conflict-of-interest that’s but one of many dichotomies in Better Mus’ Come. Ricky’s gang jumps at the offer, mostly because the $300/week (plus weapons) that they’ve been offered is twenty-times more than the $15/week they normally make. There’s a trade-off, however: working for “the man” means ceding their autonomy in the neighborhood, the equivalent of Don Corleone swapping his power for a fast-food job. It also means forcing more conflicts with the Socialists, which means the potential for more bloodshed. When Pauly tries to use Dogheart as a way to strike back at the humiliating beating he received from the Laborites, killing seems inevitable. Despite his best efforts, Ricky and his young brother are about to be dragged into the howling maelstrom that is Jamaica’s violent political struggles: in the process, Ricky will have to give up everything for the faintest glimmer of a terror-free life and future with Kemala.

I will freely, if begrudgingly, admit that my previous experiences with Jamaican cinema have been much less numerous than my experiences with other world cinemas: before Better Mus’ Come, I’d only seen The Harder They Come (1972) and Rockers (1978), two films which I thoroughly enjoyed. As mentioned earlier, however, Better Mus’ Come actually owes much more to Meirelles’ City of God than it does to either of the above two: at their hearts, both films are about the ways in which otherwise “good” youths are drawn into lives of crime thanks to the crushing poverty and inherent hopelessness of their situations. Between the two, City of God is definitely the deeper, more powerful film: while Better Mus’ Come has plenty of genuinely impactful moments, there’s also quite a bit of melodrama that wasn’t present in City of God. Meirelles’ film also seemed to get deeper under the skin of its characters than Saulter’s does, although this could also be chalked up to Saulter’s relative inexperience: this was, after all, his debut film.

While Better Mus’ Come is not, inherently, a better film than City of God, it’s still a pretty extraordinary experience. Saulter’s cinematography can be quite beautiful, at times (although it also has a tendency to be a little blown-out at others), and it really shows off Jamaica to great effect. While the musical score is a little obvious and intrusive at the beginning, it becomes much more organic and evocative by the midpoint, adding much to the film’s frequently red-lined sense of tension. While the storyline can occasionally get a bit convoluted and unnecessarily confusing (the introduction of some nefarious government agents, at the end, seems to muddy the waters a bit too much in the home-stretch), it unfolds in a fairly straight-forward way for much of the film’s running time, making Better Mus’ Come an easy film to get wrapped-up in.

Although Saulter displays some nice chops behind the camera, the real stars of the show end up being the exceptional cast. Sheldon Shepard is a real revelation as Ricky: by turns hard-headed, sensitive, biased and understanding, he’s a completely three-dimensional character. Shepard is an utterly magnetic performer, no more so than the crowd-pleasing scenes where he plays “godfather” in the slum. It’s pretty easy to see why folks would follow him which, adversely, makes it pretty easy to see why other folks want him dead. Ricardo Orgil is similarly excellent as Ricky’s right-hand-man, Flames, while Duane Pusey is so over-the-top as the reprehensible Dogheart that he often seems like a mustache-twirling silent-film bad guy. The character works spectacularly well, however, giving Ricky a suitably nasty antagonist to play off. I would be remiss if I didn’t mention Nicole Sky Grey as the Juliet to Ricky’s Romeo, however: she plays the character with a completely winning combination of vulnerability and steely reserve. At one point, Kemala asks why it’s “so easy to die for nothing” in their country and she becomes, effortlessly, both the film’s bleeding heart and its wounded conscience.

There’s an awful lot to like about Better Mus’ Come: the film is full of tense, well-staged action scenes (the big conflict between Ricky’s Laborites and Dogheart’s Socialists is suitably thrilling but is over-shadowed by the truly bravura scene where Kemala and Chris are almost caught by Dogheart’s crew while hiding in the trunk of a cab), features a nicely realized romance (Ricky and Kemala make a cute, realistic couple) and has plenty to say about Jamaican politics circa the late-’70s. The film sometimes suffers from “feature-debut” jitters but, on the whole, is a remarkably assured creation. Despite my relative lack of knowledge regarding Jamaica’s political history, I was utterly enthralled by Better Mus’ Come.

While the film isn’t based on actual events, per se, it’s certainly inspired by the era it represents and marks a distinct, powerful calling card for an emerging new talent. I’m going to go out on a limb here and suggest that we’re going to be seeing a lot more of Storm Saulter in the future: while Better Mus’ Come isn’t quite as unforgettable as City of God, I’m willing to wager that Saulter’s next film will be.