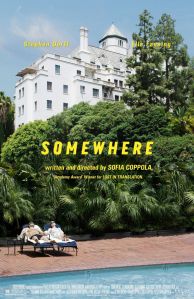 If there’s one big take-away we can get from Sofia Coppola’s Somewhere (2010), it’s that being young, rich and famous is just about as tedious and dull as it gets. Sure, Johnny (Stephen Dorff) may be a famous actor who indulges in endless partying, drinking and womanizing, attending one gala overseas movie premiere after another but it’s the in-between moments that are particularly telling: when not surrounded by paparazzi and sycophants, Johnny’s life seems to entail sitting alone in his hotel room home, drinking and smoking one cigarette after the other. Entitled? Absolutely. Glamorous? Not on your life.

Since this is the movies, however, we know that it won’t be that simple: there’s got to be some sort of catalyst for change. And there is, of course, in the person of Cleo (Elle Fanning), Johnny’s 11-year-old daughter. Johnny’s ex-wife has sent Cleo to spend some time with her absentee father and he’s reluctantly agreed, despite the monkey wrench it will throw into his wastoid lifestyle. Somewhere along the way, however, a funny, cinematic thing starts to happen: Johnny and Cleo begin to connect and the lay-about actor starts to feel the first stirrings of some pretty alien emotions – love, responsibility and a new-found sense of purpose. Perhaps there’s more to life than empty partying and pleasure-chasing. Perhaps it will be 30-something Johnny who finally begins to grow up, rather than his pre-teen daughter. Perhaps it’s actually up to the child to teach the adult the real ways of the world. Perhaps, perhaps, perhaps…

As someone who thoroughly enjoyed Sofia Coppola’s first two films, the gauzy, hazy The Virgin Suicides (1999) and Oscar-winning Lost in Translation (2003), I was really looking forward to seeing Somewhere. While I haven’t kept up with Coppola’s career in the same way that I have her father’s, for example, I’ve long felt that she was a ridiculously talented writer/director who was managing to develop her own unique, distinctive vision, a vision that didn’t look quite like anyone else’s (least of all, her father’s). Alas, I found Somewhere to be something of a mess, alternating between deadly dull non-action and bizarre, awkward, vaguely nonsensical “arthouse” elements, none of which sit comfortably side by side. It’s a film that opens with a terribly tedious, repetitious static shot of a car racing around a track and then manages to one-up this tedium at every possible opportunity.

While there’s undoubtedly an intriguing film to be made out of the skewering of movie star lifestyle clichés, Somewhere just doesn’t have a whole lot to say. Sparse and spare to the point of feeling underdeveloped, the film comes across more as a series of tedious vignettes than any kind of organic, cohesive narrative: Johnny watches in abject boredom as awkward twin dancers perform a strange pole-dance to the Foo Fighters’ “My Hero”; Johnny watches Cleo figure-skate for what feels like 10 uninterrupted minutes; Johnny shares an elevator with Benicio del Toro (playing himself, natch); Johnny sits for a lengthy makeup session that involves the application of an old man mask; Johnny has an awkward encounter with a male masseuse who drops his own drawers since “if his clients are naked, he should be, too”; Johnny and Cleo attend an Italian awards show; Johnny and Cleo lounge by the pool…it (literally) goes on and on and on. Of the various “scenes,” most are deathly dull, although the bits involving the awful twin dancers and the naked masseuse are, at the very least, more entertaining than the mind-numbing figure-skating routine.

There are a few nods to an actual storyline buried in here (Johnny keeps getting mysterious texts from someone who asks him not to be an “asshole,” pushy paparazzi keep tailing him) but nothing ever develops past the most basic level: in essence, Somewhere is 90-odd minutes of minutiae and ennui. There’s no character development, even if Johnny, technically, finishes the film with a different mindset than he began it (never mind that his character arc ends with his car breaking down and he merrily walking into the horizon because, you know, “regular” people walk places): Cleo never seems to serve as more than a plot device, save for one nicely realized scene where father and daughter share room-service gelato and watch Italian-dubbed episodes of Friends on TV.

It doesn’t help that Johnny is kind of a shitty person to spend any amount of time with: he’s moody, disinterested in everything to the point of being disengaged and seems to exist in a constant state of horny boredom. At a certain point, his non-stop womanizing becomes unbelievably silly (Johnny is so desirable that anonymous women flash him, in public, and he always seems to be coming home to a new, mysterious, nude woman in his bed), although there’s something undeniably creepy about his tendency to follow strange, attractive woman around. Is it only considered stalking if the creep isn’t rich and famous? Inquiring minds want to know.

From a craft standpoint, Somewhere is decent but certainly nothing to write home about. While the cinematography, courtesy of frequent Fincher collaborator Harris Savides, features some truly beautiful night shots, it just as often simply revolves around medium close-ups of Stephen Dorff looking bored. The minimalist electro-score, by French electronica-pop band Phoenix, is so restrained as to recede almost completely into the background, providing the kind of generic score that could have been contributed by any number of faceless soundtrack pros. The acting is just fine throughout, although none of the actors, in particular Dorff, ever seem to display much beyond passionless disinterest and melancholic acceptance.

I really wanted to love Somewhere but I’ll be honest: the tedious opening set a tone that, unfortunately, the rest of the film was only too eager to fulfill. Although I’ve yet to see Coppola’s take on Marie Antoinette (2006) or her critically acclaimed recent film The Bling Ring (2010), I must admit that Somewhere has made me extremely wary. While one less than stellar film does not a career break, necessarily, Somewhere felt like an expansion and doubling-down of the worst affectations in Coppola’s first two films. I’m still curious to see what Coppola has in store for the future but count me as someone who would rather have been anywhere than Somewhere.