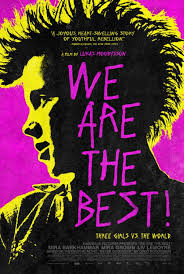 When you’re caught in the thick of it, adolescence pretty much sucks: your hormones are racing out of control, no one takes you seriously, romance is weird, adults are stupid, parents are worse, you just wanna get out there and live but everywhere you turn it’s just more rules and the only solution seems to be to blast your music as loud as you possibly can but it never seems to get loud enough to drown out all the fakers, phonies and assholes that seem to be everywhere you turn. It’s only once we get some wear under the engine and a few decades behind us that we fully understand what adolescence is: that one, pure chance to grab the brass ring with both hands and hold on for dear life before the world tries its hardest to grind you into dust.

Swedish writer-director Lukas Moodysson seems to understand this pretty well: his newest film, the unbelievably jubilant We Are the Best! (2013), isn’t just a love letter to teenage punk rockers or the long-gone ’80s…it’s a film about grabbing life with both hands, about making your own way in the world when none of the other options look great. It’s a film about friendships and first loves, about the awkward dance that boys and girls engage in because nothing makes sense but everything seems possible. It’s a film about standing out when everyone wants to fit in…about being one step behind pop culture because you like what you like, not what’s force-fed to you. It’s a film about how much girls rock (because they do), about how dumb boys can be (because they are) and about how clueless adults here (because they always will be). We Are the Best! isn’t just one of the best films of 2014 (although it is that, without a doubt): it’s also one of the very best films about adolescence ever made. We Are the Best? By the time the end credits roll, you won’t be in any mood to argue.

Set in Stockholm, Sweden, in 1982, We Are the Best! concerns the adventures of a pair of teenage best friends and fellow misfits, Bobo (Mira Barkhammar) and Klara (Mira Grosin). The two girls are outcasts in every sense of the word: they worship punk rock even though it’s “dead” (says the jaded purists who have since moved on to Joy Division), rock short, stubby haircuts and mohawks when the rest of the teen girls around them are showing off their long, lustrous hair and seem to exist in a world all their own. Picked on and bullied by those around them, male and female alike, and completely misunderstood by the bemused adults in their lives, Bobo and Klara only have each other but that definitely seems like more than enough to rule the world.

After an attempt to strike back at the shit-headed boys in teenage metal band Iron Fist results in them booking time in their school’s music rehearsal space, Klara and Bobo decide that they should go ahead and just start a band. As is often the case, neither girl can play an instrument but Klara divvies up the work anyway, assigning Bobo the drums and taking the bass as her weapon of choice. At first, the pair can do nothing more than bash meaninglessly on their instruments, whipping up the kind of din that GG Allin might approve of. Talent doesn’t really matter to them, however, since they really just want the opportunity to make their message heard: school sports suck and people should focus more time on starving kids and nuclear safety. Some things never change, eh?

Big change comes, however, when the girls happen to cross paths with another misfit: serious, pale, humorless and very Christian, Hedvig (Liv LeMoyne) seems like the last person the two young punk rockers would ever connect with. Just like them, however, Hedvig is an outcast at her school: during the annual talent show, she plays the Spanish guitar like an absolute wizard but still gets heckled and laughed at. Seeking a kindred spirit, as well as someone who can actually play an instrument, Bobo and Klara basically harass Hedvig until she joins their band and, by default, their little clique. Hedvig might not be much like her new friends but they give her the one thing she can’t get anywhere else: acceptance. As she begins to come out of her shell more, Hedvig starts to grow and develop as a person, right down to the terrifying/triumphant scene where Klara hacks Hedvig’s beautiful, long hair into spastic tufts on her head.

No coming-of-age story would be complete without a romance, however, which is just what Bobo and Klara get when they fall for the members of a local punk band. Young love is never easy, however, and when the boys’ attentions prove fickle, a gulf begins to grow between Bobo and Klara. Since she’s always lived in her friend’s shadow (Klara is the very definition of a force of nature), Bobo has never had the opportunity to shine on her own. As the girls prepare for their first public concert, in a rival town, however, tensions grow, cracks appear in the foundations of their relationship and they’ll all learn a very valuable lesson: when you have true friends, absolutely anything in the world is possible.

There’s so much great stuff to be found in Moodysson’s exuberant film that it’s a little hard to know where to start but let’s begin at the top: the triple threat of Mira Barkhammar, Mira Grosin and Liv LeMoyne as the three leads is so rock-solid, so damn perfect, that you just never want them to exit stage right at any point in the film. It’s hard to pick a standout, since each of them brings so much individuality to the table. Barkhammar brings so much co-mingled pain and sweetness to her portrayal of Bobo that the character feels utterly and completely alive: she never feels like the stereotypical “ugly duckling,” rather like an actual, deeply conflicted human being. For her part, Grosin’s Klara could have been a one-trick pony: brassy, abrasive and mouthy, Klara could have functioned as a sort of Bill Murray surrogate, someone to make wise-cracks and push her more demure partner into “discovering” herself. Instead, Klara is full of just as many contradictions, foibles and hang-ups as Bobo is. Some of the film’s very best scenes involve Klara’s extremely loving, supportive family: as is the wont of teenagers, Klara sees nothing but meddling and prying in their interactions with her but I dare you to wipe the smile off your face when her mother, little sister and father (on clarinet!) join in on their’s band’s jam session. Any other actor might have played Klara as too much of a petulant brat (and there is plenty of that here, to be sure) but Grosin finds the sweetness and sincerity to her “acting out.”

And then, of course, there’s LeMoyne: as the “straight arrow” that gets bent by Bobo and Klara, LeMoyne has the most pure “acting” to do and she’s absolutely killer. Nothing in her character is as simple as just “becoming” punk: the scene where she gets her hair cut is so amazing because we can actually see the conflicted emotions run across LeMoyne’s expressive face as if broadcast on a billboard. The filmmakers also make the wise move to never play her as a patsy for her Christian beliefs, an easy potshot in similar “young outsider” films: while Klara constantly ribs and teases Hedvig about her beliefs, LeMoyne’s calm, serene acceptance is a perfect, measured and, ultimately, very honest reaction. Moodysson could have played this for much more generic “tension,” but he realizes the key point that kids are both more and less accepting of others than their adult peers.

Lest it seem that Moodysson develops tunnel-vision regarding his young subjects, however, We Are the Best! makes plenty of time to deal with the adults in their world. Anna Rydgren is excellent as Bobo’s single mom, Lena: her fumbling attempts to re-enter the dating world mirror Bobo’s own blossoming into young womanhood and there’s some genuine poignancy to the scenes where Lena attempts to deal with the reappearance of Bobo’s father in their lives. There’s also really great work coming from Charlie Falk as Klara’s older brother, Linus, who’s left punk behind to focus on post-punk with the rest of his eternally bored friends. The scene where the girls get drunk and disrupt Linus’ party could have been as clichéd as they come, but Falk finds the perfect balance between Linus’ aloof attempts to be “cool” and his inherent responsibilities as a big brother.

Truth be told, however, all of the acting in We Are the Best! is pretty impeccable, as is the film-craft: Moodysson’s movie looks and sounds amazing, especially during the climatic concert set in the high-school gymnasium. Adapting his wife’s graphic novel, which recounts her own story growing up a punk in ’80s Stockholm, Moodysson turns in a tight, well-plotted and extremely clever film that manages to feature plenty of great dialogue without turning the kids into Juno clones. In fact, I daresay that the kids in We Are the Best! are just about the most authentic versions of such I’ve seen since the glory day of ’80s coming-of-age films like Stand By Me (1986) or The Goonies (1985).

Ultimately, We Are the Best! is one of those films that I can’t recommend enough: if you were ever young, at any point in your life, you will find something here to pull you in. Personally, as someone who grew up both a punk and an outcast, I found Moodysson’s film to be just about perfect. While the scene where the chauvinistic, condescending music teachers get their asses handed to them by Hedvig’s awe-inspiring display of fretboard mastery is one of the most badass I’ve ever had the pleasure of witnessing, the film’s true power can best be summed up in the scene where Hedvig plays an acoustic cover of Bobo and Klara’s favorite punk song. As her clear voice accompanies her gentle strumming, the audience is pulled into the same amazed trance that’s ensnared Bobo and Klara. As Hedvig gives voice to the angry, political sentiments in the song, we begin to feel her character make the transition from background to foreground. At its heart, We Are the Best! is a film about finding your voice and singing as hard and loud as you can, regardless of who’s listening or trying to hold you back.

While 2014 has been a pretty amazing year for film, all things considered, few movies have been this joyful, exuberant and full of life. Is We Are the Best! one of the best films of the year? Absolutely.