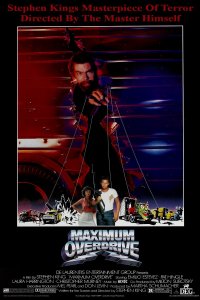 There’s a bit of a stigma attached to filmed adaptations of Stephen King novels/stories, something that almost approaches urban legend: with very few exceptions, movies made out of King’s catalog aren’t very good. There are, as mentioned, some pretty popular exceptions, such as Rob Reiner’s adaptation of Stand By Me (1986) and Darabont’s The Green Mile (1999). For the most part, however, King adaptations never seem to get it right, either treating the source material slavishly or managing to completely bungle the tone. By the mid-’80s, King decided to take matters into his own hands, end the curse and write/direct a film version of his short story, “Trucks.” The result could have been the definitive King adaptation: after all, who better to get into the mind of the Master of Horror than the master, himself? The end result, of course, was a bit different: Stephen King’s Maximum Overdrive (1986) is not only one of the worst King adaptations of all time, it’s also one of the worst films of its era. The lesson is blazingly clear: while prose and screenwriting may look awfully similar, they’re two very different beasts and being a master of one means nothing whatsoever in regards to the other. It also makes another point painfully clear: being a best-selling author makes one about as qualified to direct a feature-length film as being a world-class gymnast.

After a short intro sets up the scenario (Earth has passed into the tail of a rogue comet and will remain there for the next eight days), King jumps us right into the action, which makes the biggest flaw of the film all too clear: it’s unrelentingly stupid. King makes an appearance as a bug-eyed yokel who stares stupidly as an electronic marquee-sign changes to read “Fuck you” and an ATM flashes him the message, “You’re an asshole.” As King pops his eyes out (cuz he’s “comically surprised,” dontcha know?) and leans into the camera, he relates the classic line,” Sugarbuns, come look at this: the machine called me an asshole!” Cue AC/DC’s “Who Made Who,” roll the opening credits and give your soul to the movie gods: it’ll gets worse from here.

Like the short story upon which it’s based, Maximum Overdrive concerns a very Kingish scenario: the aforementioned comet has, for some reason, caused all of the machines on Earth to “come to life” and act independently. This means that vehicles drive themselves around, soda machines spit out cans like ammunition, electric carving knives cut through the air as if propelled by invisible hands, drawbridges raise and lower themselves and ATMs call people “asshole.” For the next eight days, humans are no longer the masters of their own technology: machines are mad as hell and they won’t take it any more! After we see a bunch of this chaos in action, including a slapstick scene involving an animate drawbridge and a truck full of watermelons, we finally settle into the truck stop that will form the setting for the remainder of the film. Once there, we meet the usual group of colorful characters: ex-con turned short-order cook, Bill (Emilio Estevez); his sleazy, obnoxious boss, Bubba Hendershot (Pat Hingle); ridiculously melodramatic waitress, Wanda June (Ellen McElduff); truck stop attendants (and fellow ex-cons) Duncan (J.C. Quinn), Joe (Pat Miller) and Brad (Leon Rippy) and random videogame player Giancarlo Esposito (otherwise known as Gus Fring on Breaking Bad).

In short order, as the machines begin to take over the outside world, the small band of survivors are joined by others: newlyweds Curtis (John Short) and Connie (the Simpsons’ Yeardley Smith); hitch-hiker Brett (Laura Harrington) and the sleazy bible salesman that gave her a ride (and tried to feel her up), as well as Duncan’s adorable Little League uniform-adorned son, Deke (Deke Holter). Deke makes his way to the truck stop after surviving a harrowing attack at the diamond that begins innocently enough, with an insane soda machine pelting his coach in the crotch with high-speed cans (Q: What’s funnier than multiple soda cans to the crotch? A: If you’re Stephen King, nothing.) and ends horribly, with said soda machine putting a can through his coach’s head. Yikes: talk about the adverse health affects of sugary beverages!

Once this motley crew all converge on the truck stop, a rampaging group of driverless semi-trucks, led by a particularly nasty toy company truck with a Green Goblin head, pen them in, encircling the truck stop and running over anyone who dares to break free. Anyone familiar with the source material will know that these trucks may be all-powerful (the original story was called “Trucks,” after all) but that they still need a little human touch when it comes to gassing up. In King’s original story, this aspect led to a bleak finale where humanity becomes enslaved to their new mechanical overlords. This time around, however, it’s all rocket launchers, “witty” one-liners (a character actually utters the line “Eat my shorts.” For real. I would not lie to you.) and good ol’ human gumption as Billy leads the survivors in one last, ultimate push against the deadly trucks. I won’t give anything away but let’s just say that “Who Made Who” makes another appearance and that song always brings the party.

There are a lot of reasons why Maximum Overdrive is a pretty awful film but most of them lead directly back to King, whether in his capacity as screenwriter or director. The script, by itself, is dreadful, full of wooden dialogue, zero characterization (Billy and Brett are a couple sorely because it says so right there on the printed page), a bafflingly inconsistent tone (extreme slapstick scenes sit right next to stuff that should cut deeper, such as the aforementioned Little League massacre) and completely arbitrary plot developments. The acting, aside from Estevez, who always manages to rise above the material, is consistently hysterical and over-the-top, none more so than the amazing creature that is Wanda June. For some bizarre reason, Ellen McElduff opts to bring her best Greek tragic acting style to the role, culminating in the scene where she rushes outside and repeatedly hollers, “You can’t! We made you!” at the trucks. She shakes her fists at the heavens, shouts til her veins pop out and even sinks to her knees: it’s a performance that absolutely befits King Oedipus but comes across as ludicrously OTT for a truck stop waitress. If this was an actual directorial/acting choice, it seems bizarre: if this was just an unchecked performance, it doesn’t say much about King’s command of the cast.

Similarly, longtime Simpsons’ voice actor Yeardley Smith (Lisa, among many, many others) makes an appearance here as Connie, one half of the nearly brain-dead duo of Curtis and Connie. Smith is so obnoxiously screechy, so whiny and just flat-out terrible, that she literally grinds the film to a halt whenever she makes an appearance. Forget the character’s motivations, which make not one whit of sense (at one point, Connie seems devastated by the destruction of their car: why treat the car as if it were a dead child?): it’s her obnoxious voice and/or personality that really come across like fingernails on chalkboard. Most of the other actors play their characters fairly broad (Pat Hingle is so damn devious as Bubba that he may as well have cloven hoofs) but McElduff and Smith deserve a special place in this film’s Hall of Shame.

Despite the massed silliness on display here (or perhaps because of it, who knows), Maximum Overdrive does possess a certain gonzo “so-bad-it’s-okay” charm that makes the film an easy watch (especially in a part environment). It will never be mistaken for anything approaching a good film (compare this with Fred Dekker’s Night of the Creeps, also from the same year, to see how to make a really great B-movie) but it certainly has its moments. The Green Goblin-faced truck is a pretty great adversary, even if it doesn’t get any lines or do much more than drive around and look menacing. There’s also a nicely realized gag involving a driverless ice-cream truck playing Roger Miller’s “King of the Road,” which easily amounts to the film’s most mature joke. As previously mentioned, Estevez is really good: he’s one of those actors who can keep my eyes glued to the screen even when he’s the only thing worth watching. I must also admit to throwing more than my fair share of devil-horns into the air during the film, as well: when the score consists entirely of AC/DC tunes (including “Hell’s Bells” and “Highway to Hell”), some headbanging must be expected, although their actual “score” contributions amount to little more than random guitar riffs that spring up during the film’s various action sequences. Regardless, no film can be truly worthless when AC/DC is involved.

Ultimately, your capacity to appreciate Maximum Overdrive will depend entirely on your tolerance for Z-grade schlock entertainment. While King’s directorial debut is sloppy, silly and nonsensical, it’s also propulsive and mercifully short. Pair this with another B-movie (as I did with Night of the Creeps) and you’re looking at a fairly amusing experience. Luckily for the world, King took the hint here and hasn’t returned to the director’s chair: although his first effort managed to cram a Simpson’s reference, flying watermelons, killer trucks and Pat Hingle into the same film, perhaps it’s better for us all if he just sticks to literature.