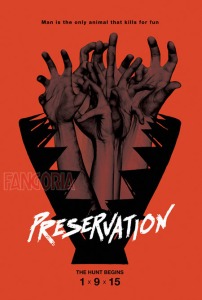 You know that guy at the party who says something “clever” and then spends the rest of the evening elbowing you in the ribs, saying “You get it? You get it?” until you want to throw him off the nearest roof? Well, Christopher Denhams’ Preservation (2014) is an awful lot like that guy: the film spends the first 20 minutes hammering its main theme into the ground (“Man is the only animal that kills for fun” isn’t just the film’s tagline: it’s practically its mantra) only to have the rest of the film follow in such a predictable manner as to induce feelings of deja vu. On one hand, though, you really have to hand it to Preservation: it promises one thing and then delivers it. Over and over and over again, rinse, wash, repeat.

Our trio of protagonists are Wit (Wrenn Schmidt), her husband, Mike (Aaron Staton) and Mike’s gruff brother, Sean (Pablo Schreiber, perhaps best known as Orange is the New Black’s odious “Pornstache”). The group have headed deep into the woods so that the estranged brothers can relive one of their long-treasured childhood hunting trips, dragging Wit along even though she’s a vegetarian who’s uncomfortable, to say the least, with killing animals. “I don’t think I can kill,” Wit tells Sean, to which he knowingly replies, “You’d be surprised what you can do when it’s fight or flight.” Remember all that hammering-home I mentioned earlier? Get used to it, buckaroos, cuz it ain’t going anywhere.

Faster than Sean can say “Just because you can’t see ’em doesn’t mean they’re not there” and that old chestnut “Man’s the only animal that kills for fun,” our heroes seem to wander into an exceptionally strange situation. Waking from the previous evening’s festivities, the group realizes two things right off the bat: all of their possessions, including their packs, supplies and tents, have been taken while they slept and they each have a large, black “X” drawn on their foreheads. There’s a little bit of finger-pointing and blame-gaming thrown back and forth between Mike and Sean before we get to the revelation that should, presumably, surprise no one: the group is being actively hunted by a group of masked, heavily armed psychos.

From this point, the film hits all the standard “survival-horror” tropes, culminating with the realization that Wit must become everything that she abhors in order to survive: she’s going to have to get her hands dirty and fight to kill. Who are the mysterious assailants? Why are they pursuing Wit, Mike and Sean? Will Wit be able to make a final, desperate stand or will the silent, isolated woods become her ultimate resting place? When the game is self-preservation…there are no rules.

Despite having a more than capable cast, Preservation ends up being more than a little shallow, silly and, to be honest, rather obnoxious. The script is fairly awful, full of ridiculously on-the-nose dialogue and contrived sequences: there’s no point where any of the actors feel genuine, mostly because it’s difficult to take anything they say seriously. Schreiber, in particular, is saddled with some of the clunkiest lines I’ve come across in an indie horror film in some time: anytime he talks, it feels like he’s ticking points off a script breakdown. Schmidt and Staton have zero chemistry which tends to reduce the stakes on many of their scenes together: it was rather difficult to believe that these two even knew each other, much less genuinely loved each other.

Even stripped to its core survival-horror elements, Preservation falls well short of the mark. The majority of the action/violence occurs off-camera (sorry, gorehounds) and the handful of action scenes are poorly blocked, rarely amounting to more than a flurry of chaos and motion. While the film does build up a reasonable amount of tension, at times, it never really amounts to much, probably because everything is so familiar: if you think you know how any particular scene will progress, chances are you’re right. While horror films have a long history of predictability (just think back to the veritable oceans of anonymous slasher flicks that flooded video store shelves in the ’80s), Preservation does absolutely nothing whatsoever to mess with the formula. Even the film’s big “twist” reveal is so hackneyed and clichéd that careful (or even non-comatose) viewers should be able to figure it out after the very first appearance of the villains: needless to say, it’s difficult to be shocked, surprised or amazed by anything when we always seem to be five steps ahead of the film, itself.

To be honest, I was actually surprised by how slight and silly Preservation was for one very simple reason: writer-director Denham’s previous film, Home Movie (2008), is one of the most disturbing, well-made and haunting indie horror films I’ve ever seen. His found-footage portrait of parents coming to terms with their two unbelievably evil children is one brick to the face after another, culminating in the kind of harrowing finale that can, literally, haunt dreams. Home Movie completely blew me away when I saw it years ago and I’ve been eagerly awaiting a follow-up ever since: suffice to say that Preservation couldn’t have disappointed me more if it had actually been made with just that express purpose.

Despite this disappointment, however, I haven’t quite given up on Denham (goes to show just how impressed I was by his debut). While Preservation’s script is dreadful, Home Movie’s was quite good: ditto on the scenario end of things. As such, I’m deathly curious to see which direction his third film (whenever it appears) will take. Here’s to hoping that the next wait will bear much more delectable fruit than this most recent excursion. When your film has a problem making a life-or-death Port-a-Potty battle between Pornstache and a masked assailant interesting, well…it might just be time to pave over this preservation and put up a parking lot.