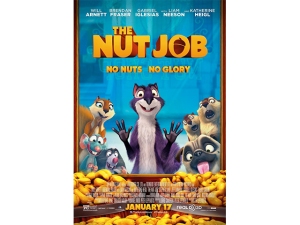 There are few things in this world that I openly detest quite as much as overly referential animated films, ala Shrek (2001), although films like Scary Movie (2000) and Disaster Movie (2008) are certainly right up there. My big problem with movies like this (aside from the fact that they’re usually obnoxious, shrill and prone to induce seizures in anyone younger than 20) is their undue reliance on “of-the-moment” pop culture references: a few months (or even weeks) after films like this are released, they’re instantly dated and feature no staying power whatsoever. It’s similar to SNL skits that are based on recent celebrity faux pas and “current affairs”: these incidents may have relevance at the moment but who’s going to care in a month, let alone a decade?

I begin with this disclaimer by way of saying that Peter Lepeniotis’ The Nut Job (2014) almost lost me before it had a chance to grab me. Within moments of starting the film, I was treated to my first pop culture reference (albeit an extremely dated one): the heroic squirrel Grayson (Brendan Fraser) smirkingly remarks to another character that “Chicks dig the tail.” Not only was this roughly the millionth tired variation of the Batman & Robin (1997) bon mot that I’d been treated to over the years but it also managed to come almost twenty years too late to be anything more than a complete head-scratcher: do people still remember Joel Schumacher’s Batman films, especially in the wake of Christopher Nolan’s extremely popular modern reboot? More importantly, does anything really care enough to be tickled by another stupid reference to an already tedious film?

I say “almost lost me,” however, because The Nut Job manages to pull off a rather nifty hat trick: it nimbly straddles the dividing line between “cheeky, good fun” and “hyperactive kiddie fodder,” coming out quite handily on the side that doesn’t tend to make me see red. In many ways, The Nut Job reminds of recent films like Free Birds (2013) and The Croods (2013), although it’s a solid step down from either of those movies. Nonetheless, there was enough good stuff here to keep me utterly engaged all the way up to the end credits, wherein an animated Psy appeared to shake his pixels to his mega-hit Gangnam Style: it probably says a lot that not even the ultimate gratuitous pop-culture reference could spoil the good will that the film earned.

The Nut Job concerns the misadventures of Surly Squirrel (Will Arnett), the disagreeable loner with the “all about me” attitude. Surly lives in one of those giant cinematic urban parks that seem to consist of miles of unspoiled trees, pristine ponds and general pastoral beauty. The rest of the park’s resident animals, including the aforementioned Grayson, Andie (Katherine Heigl), Mole (Jeff Dunham) and Buddy the Rat (Rob Tinkler), are ruled by the iron-fisted Raccoon (Liam Neeson), a smooth-talking “Tammany Hall”-type politician with a hidden agenda. When Surly’s newest scam (stealing a mobile nut cart) backfires and leads to the destruction of his fellow animals’ winter food storage, the angry animals banish the rapscallion to the terrifying wilds of the city proper, the worst punishment that any of the animals can imagine.

Once in the city, alone but for the continued friendship/servitude of his mute buddy Buddy, Surly happens upon a little bit of nirvana (nutvana?) in the form of a nut store, seemingly run by the same shady fellas that ran the doomed nut cart. Turns out that these fellas, Fingers (James Rankin) and Lucky (Scott Yaphe), are a couple of gangsters working for King (Stephen Lang) and the mysterious, mute Knuckles: they’re all playing to use the nut store as a front for breaking into the bank next-door. In a cute bit of symmetry, Surly plots to break into the nut shop in the same basic way that King and his gang plot to break into the bank. When Andie and Grayson show up, however, looking for food for the rest of the park animals, Surly is forced to reexamine his standoffish ways and must decide whether to swallow his pride and help those who’ve exiled him. As Surly will learn, it doesn’t take anything special to look out for number one but it takes a whole other kind of animal to selflessly look out for others: it takes a hero.

While The Nut Job features a witty, tight script, its two greatest strengths are, without a doubt, the exceptional voice acting and the eye-catching computer animation. While I’ve always been a huge fan of the traditional cel-style of animation (think the classic Disney films), I’m gradually warming to the more recent computer animation of films like the aforementioned Free Birds, The Croods, Rango (2011) and ParaNorman (2012). When done well, these films can look quite beautiful (if slightly colder than more traditional animation styles) and The Nut Job is no exception. Indeed, the scene where the animals’ storage tree burns is quite wonderfully evocative, almost artistic in its destruction. Nothing about The Nut Job looks cheap, which really helped to pull me into the story.

The biggest boon for any modern animated film is its voice cast, however, and The Nut Job features some real winners. While Arnett is a slightly less interesting presence here than in his live-action performances (or the animated Bojack Horseman, for that matter), he’s still a commanding performer and utterly magnetic. I’ve, personally, never been the biggest fan of Katherine Heigl, but was completely taken with her Andie: she brings a refreshing measure of common sense, trepidation and strength to the character that makes her not only an interesting character but a pretty good role model, to boot…not a bad trick for a “kid’s movie” to pull off. For my money, however, the real pick of the litter this time around has to be Liam Neeson: the veteran actor (now action star, apparently) rips into his role with absolute gusto, turning in one of the most bravura performances of a pretty bravura career. Neeson is having so much fun as the nefarious Raccoon that it’s completely infectious: I found myself grinning from ear to ear whenever he showed up to spread his pretty poison about and the climatic battle with Surly is a complete treat. My only complaint with the voice cast at all, to be honest, is with the relative lack of Fraser as the boneheaded, heroic Grayson: there just wasn’t enough of him here, making the character come across as woefully underdeveloped and strictly one-dimensional. This, of course, is a tremendous pity, since Fraser is one of the few human actors around (Andy Serkis being another one) who almost seems more of an animated character than a flesh-and-blood person.

Ultimately, I found a lot to like about The Nut Job. The film is vibrant and kinetic, yet manages to downplay the hyper-active pop-culture references that manage to sink similar films (at least as far as I’m concerned…Shrek’s massive popularity seems to bespeak of a much more tolerant attitude among the general movie-going populace). The voice talent is top-notch and the film is full of nicely orchestrated, suitably tense action scenes and set-pieces. I also really liked how the film manages to serve as commentary on our current superhero-obsessed culture: despite Surly’s position as park savior, the film is really about how self-sacrifice is necessary to the continued survival and evolution of our communities and societies. Surly doesn’t truly find happiness until he sets aside his own selfish needs and feelings and works towards the greater good: I’m not suggesting that I completely believe in this kind of “feel-good community activism” but it sure as hell beats the “every man/woman for him/herself” tact by a country mile.