As promised, we return with Week Four of the 31 Days of Halloween. We came up a little short on titles, for this particular week, and what we did screen definitely leaned towards the “classics” end of the spectrum, including one film that hadn’t been seen for quite some time. This week did include one new film, however, as well as one of the VHS Graveyard’s favorites. Take a trip with us now to that bygone time last month, as the Halloween train starts to approach its final destination. 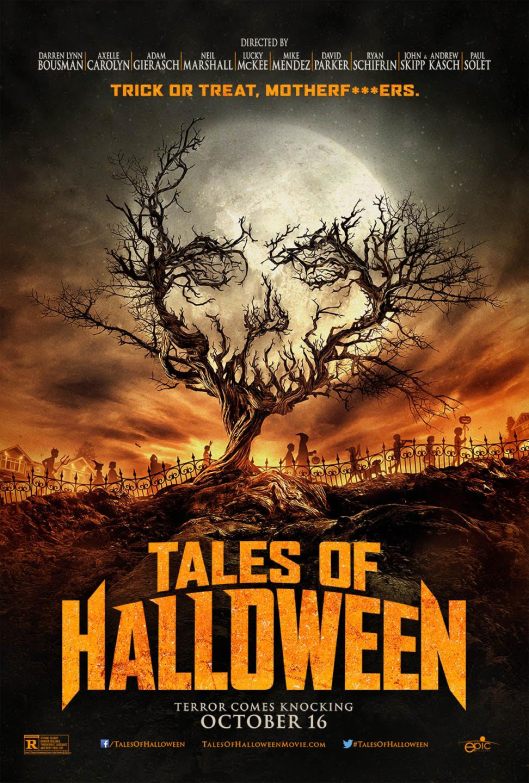 By virtue of its format, Tales of Halloween isn’t a perfect film: a couple of the shorts were bound to be duds. When the shorts work, however, as in the case with Mike Mendez, Darren Lynn Bousman and Neil Marshall’s contributions, they work spectacularly well. Mendez’s short, “Friday the 31st” may just be one of the cleverest, best horror shorts I’ve ever seen and the central gag never wears thin with me. Most importantly, the whole anthology screams “Halloween” from the first frame to the last, making this somewhat of a no-brainer as far as seasonal programming goes. 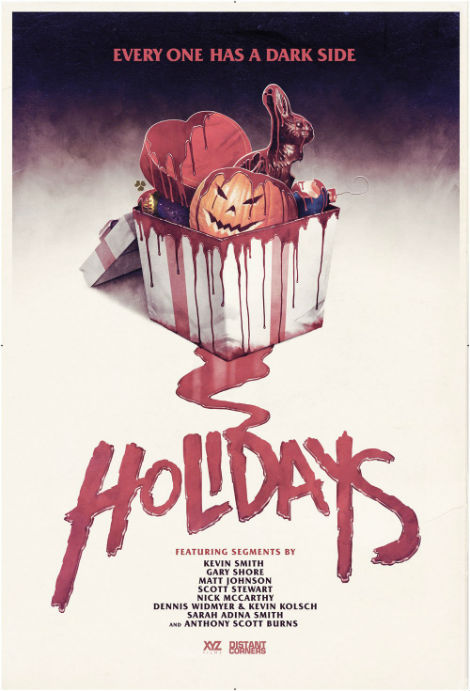 Another anthology film, this time based around various holidays. We get a wide-range of holidays (Valentine’s Day, St. Patrick’s Day, Easter, Mother’s Day, Father’s Day, Halloween, Christmas and New Year’s Eve), a wide-range of directors (including Starry Eyes’ Kevin Kolsch and Dennis Widmyer, The Midnight Swim’s Sarah Adina Smith, indie auteur Kevin Smith, The Pact’s Nicholas McCarthy and Some Kind of Hate’s Adam Egypt Mortimer) and a wide-range of results: pretty much par for the course with any anthology film.

While this definitely ends up on the lesser end of the spectrum, there is still much to laud here: the chronological structure works really nicely, the production values are pretty consistent and a few of the shorts (St. Patrick’s Day and Easter, in particular) are quite disturbing. That being said, there are definitely better horror anthologies out there, including the previously mentioned Tales of Halloween.

It’s probably been at least a decade and a half since I’ve seen this fun little cult flick, so I figured that this year was as good as any to revisit Angela and her deadly shindig. Although nothing about Night of the Demons is necessarily amazing, it ends up being one of the more cohesive, well-made Evil Dead ripoffs to clog video store shelves in the late ’80s/early ’90s.

This age-old tale of teens partying in the wrong abandoned mortuary (is there really a right kind of abandoned mortuary?) features lots of ’80s staples: hair metal on the soundtrack, stereotypical characters (punker Stooge is a real riot), loud musical stingers, unnecessary slo-mo, scream queen Linnea Quigley, teenagers that are at least 25 years old, lots of gory effects and tons of questionable decisions. It’s fast-paced, goofy, a little odd and, as previously mentioned, lots of fun. It also gets bonus points for being set on Halloween night, making it a great choice for October viewing. Classic film? Not really. Worth your time? You betcha!

I wasn’t a huge fan of Turbo Kid (2015), to be honest, finding the film a bit heavy-handed with its ’80s worship and possessed of a few too many obnoxious characters for my taste. This is only relevant because the team behind Turbo Kid (writer/directors Francois Simard, Anouk Whissell and Yoann-Karl Whissell) have just released a new film, set in the ’80s, and guess what? Yeah…I’m not a huge fan of this one, either.

This time around, we get a film that manages to graft Stranger Things, Rear Window and Cape Fear together and the result is a mixed bag. As with Turbo Kid, the ’80s homages are so heavy-handed as to be almost parody but the characters are more likable and grounded. Much of the film still stretches credibility but never enough to make me tune out. Nothing about this tale of youthful friends trying to stop a serial killer in their sleepy suburban neighborhood is revolutionary or particularly innovative but it gets the job done.

Of all the horror franchises, the Nightmare on Elm Street series is easily my favorite. For my money, it’s not only the best, in general, but also the most consistent: while the Friday the 13th, Halloween and Texas Chainsaw Massacre franchises all have strong individual films, they also have plenty of lunk-headed clunkers. Nightmare on Elm Street films might not always have been amazing but they were always solid and supported the same, consistent story-line (ala the Child’s Play series).

The third entry in the Elm Street saga, The Dream Warriors, is easily my favorite in the series, as well as one of my favorite films, in general. I actually got to see the film in the theater, at the very impressionable age of 10, and I can still remember the experience over thirty years later. This one features tons of inventive kills (the marionette, snake and TV being three easy examples), a Freddy who still possesses genuine menace and the final “regular” appearance of Heather Langenkamp’s iconic Nancy. Hell, it’s even got a totally kick-ass ass, hair metal theme song. They truly don’t make ’em like Dream Warriors anymore.

That finishes off the penultimate week of the 31 Days of Halloween. Stay tuned for the final week and the conclusion to this year’s spooky event. Don’t dig into that turkey just yet, boos and ghouls: that jack o’ lantern still has a little spark left in it!