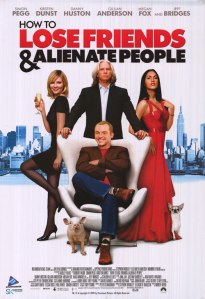 As a modern society, we’ve become pretty obsessed with celebrities and the private lives of these glitterati. In a classic case of “the grass always looks greener,” it’s very inviting to look over the elegantly wrought-iron fences, past the armed security and straight into the beating heart of the American dream. This, of course, is a steaming load of horse pucky: the grass is greener because it’s Astroturf and the beautiful people look a lot like everyone else do first thing in the morning. This, of course, hasn’t stopped an entire cottage industry of gossip shows, tabloids and paparazzi from springing up to document every celebrity faux pas, grocery store visit, nose job and million-dollar deal under the sun. While it often seems that these purveyors of celebrity “news” are jaded outsiders looking to blow holes in the rhinestone-bedazzled Hindenburg that Hollywood often resembles, the Simon Pegg-starring How to Lose Friends and Alienate People posits a slightly different theory: these paparazzi are just as obsessed, envious and in love with these folks as everyone else is supposed to be.

Based on Toby Young book about his real-life experiences, HTLFAAP introduces us to the character of Sidney Young (Simon Pegg). As a boy, Sidney was obsessed with the idea that all celebrities lived together in some sort of Shangri-La…a 24/7 Copacabana where the drinks were always comped, the makeup was always immaculate and the people were all cool as ice. If he could just get there, he reasoned, he would be one truly happy young boy. As the opening voice-over lets us know, however, “celebrity journalist” is as close as he’s gotten to this imagined paradise. As he sits with starlet-of-the-moment Sophie Maes (Megan Fox) at an award show, one Best Actress award away from some promised pity sex, Sidney reflects back on the events that led him to this particular moment in time. The flashback takes us into our movie proper: one part workplace comedy, one part Hollywood satire, one part old-fashioned romance.

We see Sidney as a scrappy, ultra-combative tabloid journalist, prone to celebrity attack pieces and raging against the machine of the big corporate fluff rags. He ends up on the radar of Clayton Harding (Jeff Bridges), a gossip-rag magnate, after he crashes one of his exclusive A-list Hollywood parties. Sidney reminds Clayton of himself, at that age and economic level, so he does the only thing that a respectable gossip-mag baron would do in a situation like this: he puts Sidney on the payroll. This puts Sidney into direct contact with your usual rogues’ gallery of assorted oddball characters: Lawrence Maddox (Danny Huston), Sidney’s slimy boss; Alison (Kirsten Dunst), the prickly co-worker that would never, in a million years, fall for a jerk like Sidney; fame-hungry starlet Sophie Maes, her little dog Cuba and reptilian agent Eleanor (Gillian Anderson); and colossal jackass/director Vincent Lepak (Max Minghella).

As Sidney navigates these treacherous, shark-filled waters, he finds himself falling for Alison (natch), although she has a mysterious absentee boyfriend that makes getting together seem a little impossible. There also seems to be some interest from Sophie, although she seems more than willing to do absolutely anything that would push her career one step closer to the big time. Sidney’s old rebel spirit begins to fight back as he’s asked to do a puff piece on Lepak, a black-hole of vapidity so dense that nothing can escape his crushing stupidity. When Sidney rebels, it seems like the only thing holding him back is himself: as Harding told him earlier, he’s standing in the first room and is fully capable of getting to the last room…if he wants it bad enough. Sidney must reconcile his own core values with his lifelong desire to fit in with the “cool kids,” all while trying to figure out just what, exactly, he really wants to do with his life.

My biggest beef with HTLFAAP is that the film ends up being so schizophrenic. On the one hand, it wants to be a snarky, razor-sharp satire on the inherent ridiculousness of Hollywood, complete with an epic Mother Teresa biopic starring Megan Fox. On the other hand, the film wants to be one of those ubiquitous workplace dramadies where co-workers conspire against each other, ideas are stolen, comeuppances are had by all and a quirky parade of characters engage in utterly quirky behavior. On the third hand, the movie wants to be an old-fashioned romance, one of those Cary Grant-starrers where the guy and gal don’t see eye to eye, you see, until they do, at which point they fall madly in love with each other and live happily ever after. As you can see, there’s about one hand too many here. This is a big reason why the film ends up being a bit of a tonal mess: one moment, it’s a frantic, ultra-high-strung slapstick comedy, the next moment, it’s a stereotypical “indie comedy,” with Juno-esque dialogue and sardonic voice-over. The film also gets serious, from time to time, mostly to remind us that Sidney is constantly in danger of losing his core values.

For my money, the most tired aspect of the film (and the one that I would have cut first) would have to be the hackneyed romantic angle. The romance steals the focus of the film almost entirely, especially by the final third, where Sidney is madly rushing about trying to win the hand of Alison. In fact, the final denouement has virtually nothing to do with any of the celebrity-chasing that came before, breaking everything down to that time-honored (and ultra-trite) notion that all you really do need is love. How nice. Were there some actual chemistry between Pegg and Dunst, the romance might carry a little bit more weight. As it stands, however, it felt very much like “Character A must like Character B”-level plotting and never felt authentic.

What worked? The film seemed to wring the most success from the celeb-mocking stuff (the Mother Teresa gag is, quite simply, one of the funniest jokes I’ve seen in quite some time) and the performances were pretty sturdy. It’s always nice to see The Dude in something but I kinda wish Bridges had been given more to do than bluster and offer the occasional bit of sage advise. Pegg did a decent job playing a shithead character but this kind of smug, self-absorbed nitwit is starting to seem like old hat for ol’ Simon: it would be nice to see him branch out a little. Ditto for Dunst, who’s been on this kind of autopilot for his last few roles. She’s a great actress but, too often, she’s just required to be withering. Huston and Anderson are great in some meaty supporting roles: Anderson, in particular, is a blast to watch and neatly wrestles the film away whenever she’s on-screen.

At the end of the day, is How to Lose Friends and Alienate People worth a watch? It really depends on your expectations. If you’re a Simon Pegg fan, you could probably do worse (like Mission Impossible III) but you could certainly do better (see a Fantastic Fear of Everything, instead). I’m not familiar with the original book, or the person it was based on, so I can’t really vouch as to the authenticity of either, at least as represented here. My personal take is that Sidney comes across as a self-absorbed douchebag but, then again, what do I know? I do know that the romantic aspect drags the film down, however, and that it would have been a lot better had it been a lot shorter and tighter. I also know that, despite my intense dislike of Megan Fox, I would pay very good money to see her play Mother Teresa in that promised biopic: I kinda wish the filmmakers had given us an hour of that instead of two hours of this.