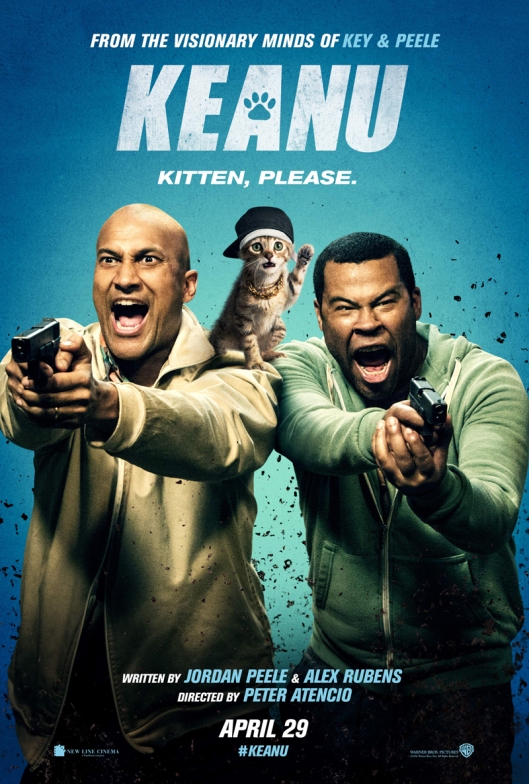 In many cases, you never know quite what you have with a movie until you’ve actually sat down and watched it. Sure, the poster and teaser trailer might have given you some idea of what to expect but there’s almost always that “aha!” moment where all is actually made clear. After all: you know that all of those famous floating heads must be in the film somewhere but what are they actually doing?

Take, for example, the advance poster for Keanu (2016), the inaugural, big-screen starring debut from sketch-comedy mavens Keegan-Michael Key and Jordan Peele. One look at the poster would have us believe that the film centers around the terminally mild-mannered duo laying waste to everything around them, all in order to save an adorable kitten in a do-rag. Once you actually get into the film, however, you quickly come to realize that it’s actually about the bumbling duo laying waste to everything around them, all in a desperate attempt to save a kidnapped kitten, who just happens to sport a do-rag for most of the proceedings. Wait a minute…

This, of course, is not only needlessly reductive but downright mean: Keanu might offer up exactly what’s advertised but it does so in such a buoyant, jubilant and bighearted way that you’d have to be a literal monster not to be charmed. Think of this as the goofy, nerdy little brother to Edgar Wright’s Hot Fuzz (2007), a little brother raised on Nickelodeon shows, ’90s-era bullet ballets like Bad Boys (1995) and Con Air (1997) and enough Mountain Dew to kill a rhino. Silly? Without a doubt. A blast and a half? You know it!

Concept-wise, this loads a bunch of comedy/action tropes into a blender, hits puree and pours out the frothy results for instant audience enjoyment. Our heroes, Clarence (Key) and Rell (Peele), are the kind of meek, vanilla nice guys who make Mr. Rogers look like Max Cady, by contrast. Clarence, an avowed George Michael fanatic, seems completely oblivious to his neighbor, Spencer’s (Rob Huebel, oozing slime like a garden snail) smarmy machinations regarding his wife, Hannah (Nia Long). Rell, for his part, has just suffered a painful breakup and chooses to sooth his inner turmoil with copious amounts of weed purchased from next-door-neighbor Will Forte (doing his best K-Fed impression).

Change comes to the best friends in the form of the ridiculously adorable titular kitten, an escapee from the drug warehouse massacre that opened the film in full-on John Woo mode. Rell falls in love with the little fuzzball when it shows up on his doorstep and instantly finds a reason to not only stop moping around but to fully embrace life again. When the dynamic duo returns home from a movie and finds Rell’s house ransacked and Keanu missing, however, they’ll need to embrace their inner tough guys (well…relatively speaking, at least) and rescue the little guy. Along the way, they’ll tangle with the notorious 17th Street Blips, get dosed with a dangerous new designer drug, stay one step ahead of the lethal Allentown Boys, find love, earn some street cred and prove that nice guys can, in fact, finish first.

From the jump, Keanu is a thoroughly ridiculous, silly and absurd film: make no bones about that. The kicker is that everyone involved is so good-natured and all-in that it’s impossible not to get swept along for the ride. Praise must go to stars Key and Peele, of course, since the whole enterprise would quickly sink without their impeccable timing and genuine sense of camaraderie but the film is full of little touches that prove it’s more than just an extended skit from their show.

Like the aforementioned Hot Fuzz, part of the key to Keanu’s success is that it genuinely likes the moldy old tropes and cliches that it skewers left and right. This isn’t a case of derisively mocking cheesy buddy-action films: this is about pointing out the inherent absurdity of said cliches while simultaneously celebrating them. To that end, we get copious slo-mo gun battles, shell casings falling like snow and assassins so badass that they refuse to die, no matter how many rounds you pump into them. We get the obligatory car chases, tense promises of torture and a pounding soundtrack to highlight all of the gleeful carnage.

The difference, here, is that Key, Peele and their frequent TV collaborators (director Peter Atencio and co-writer Alex Rubens) are smart and skillful enough to weave plenty of surprises and sly commentary into this otherwise familiar tapestry. We get the expected plot point where Rell and Clarence need to impersonate tough guys in order to infiltrate the Blips but the scene pays-off pretty spectacularly when Key’s Clarence mugs so virulently that he becomes a cartoon-version of a gang-banger. Add to this their chosen gang monikers (Techtonic and Shark Tank) and you have a great gag that finds new ways to explore an old concept.

This upending of expectations manifests itself in ways both subtle (notice how the drug-packers in the opening scene are all scantily-clad guys rather than the underwear-clad women that are usually par-for-the-course with this type of thing) and in-your-face (every single bloodthirsty killer in the film appears to be as head-over-heels in love with Keanu as Rell and Clarence are) but it all has the effect of keeping the audience on its toes. Even if we recognize the basic set-up for a joke, chances are the filmmakers will find some way to subvert or modify it.

Despite how thoroughly charming and fun the film ends up being, however, Keanu is certainly not without its share of flaws. 100 minutes is a fairly long time for a silly, breezy comedy and there are plenty of scenes that could have benefited immensely from some judicious editing. In particular, a set-piece that contrasts Rell and Hi-C (Tiffany Haddish) trying to deliver drugs to an upscale party while Clarence waits outside and teaches the Blips to love George Michael starts off great, with plenty of big laughs, but ends up going on forever and becomes something closer to annoying. Call it too much of a good thing but plenty of this could (and should) have ended up on the cutting-room floor.

There are also frequent dead spots in the film, usually at any point that doesn’t feature Key, Peele and the kitten as the main focus. When the trio are together, they’re pretty much unstoppable: Key and Peele have such a natural, unforced chemistry that they handily sell each and every interaction, whether sweetly sentimental or delightfully demented. When it comes to the rest of the cast, however, the results can be a bit more hit-and-miss when they take center-stage: Forte, in particular, is so one-note and stereotypical that he wears out his welcome shortly after his introduction…and this is from someone who thinks he’s one of the best comic actors of this era. Ditto Method Man, whose steely Cheddar (because he played Cheese on The Wire, dontcha know?) never seems like more than a stock character type.

In the end, however, most complaints about this will be more quibbles and nitpicking than anything major: Keanu comes out of the gate with a very specific modus operandi and, if you’re on its wavelength, I’m willing to wager you’ll love it. From the scene where Rell and Clarence roll into slo-mo battle to the tune of George Michael’s “Freedom” to the fist-raising bit where Keanu saves the day, this is a film that knows how to deliver one crowd-pleasing moment after the next. Keanu may not be the most original film out there but there is one claim it can make: it is, without a doubt, the best action-comedy about a kidnapped kitten in a do-rag and tiny gold chain that you will ever see. That, my friends, you can take to the bank.