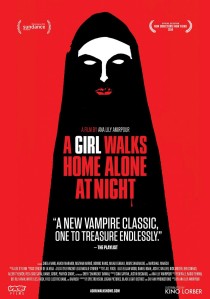 Billed as “the first Iranian vampire Western,” writer-director-producer Ana Lily Amirpour’s A Girl Walks Home Alone at Night (2014) is an endlessly fascinating debut, a thoroughly confident horror-art piece that manages to turn its grab-bag of cinematic influences into something effortlessly cool. More Dead Man (1995) than Only Lovers Left Alive (2013), Amirpour’s film throws gorgeous black and white cinematography, nods to the French New Wave, German Expressionism, the holy trinity of Jarmusch, Bergman and Jeunet and the ’80s youth flicks of John Hughes into a blender and hits “puree.” While the results aren’t perfect, AGWHAAN is still a stunning feature-film debut from an amazingly talented new filmmaker and a necessary addition to the existing bloodsucker canon.

Amirpour’s debut (based on an earlier short) concerns the various residents of the Iranian town of Bad City. A virtual ghost town, Bad City appears to be inhabited solely by drug addicts, prostitutes, pimps/pushers, hustlers and the odd street urchin, here and there. Our humble hero, Arash (Arash Marandi), is a hustler who looks like he stepped straight out of East of Eden (1955): with his white t-shirt, blue jeans, omnipresent sunglasses and vintage muscle car, he’s a classic rebel without a cause. His father, Hossein (Marshall Manesh), is a pathetic junkie who owes a wad of cash to the local pimp/dealer, Saeed (Dominic Rains). For his part, Saeed is a philosophical, if thick-headed, thug who isn’t above taking Arash’s car as partial payment for his dad’s debt, while ruling his “girls” with an iron fist. One such “employee” is Atti (Mozhan Marnò), the sad-eyed, thirty-year-old prostitute who plies her trade on the barren, empty streets of Bad City, overshadowed by the towering oil derricks in the background.

As these various sad-sacks go about their repetitive routines, a new force emerges to shake up the status quo: a mysterious, silent young woman (Sheila Vand) has taken to stalking the streets, doling out death to any who cross her path. When the vampiric girl puts a permanent end to Saeed, Arash seizes the opportunity and attempts to fill the void left by the drug dealer. As Atti and the mysterious girl form a bond, however, Arash finds himself similarly drawn to the enigmatic figure. What does the young woman really want? What does the future hold for Bad City and its shadowy residents? One thing’s for certain: if you have to be out after dark, be sure to stay far, far away from the girl walking home alone…your very life may depend on it!

Lush, hazy, hypnotic and vaguely hallucinatory, A Girl Walks Home Alone at Night is the kind of film that you wrap around yourself like a cozy blanket, consciously giving yourself up to its warm embrace. While the pacing and visuals often bring to mind a perfect synthesis of Jim Jarmusch and Ingmar Bergman’s respective styles (the scene where the Girl skateboards down the center of the deserted street is framed in a way that turns her into the spitting image of Death from the iconic Seventh Seal (1957), while the film’s numerous long takes and relative lack of forward momentum handily recalls the aforementioned Dead Man), Amirpour’s influences are far more wide-reaching than something as simple as “Indie 101.”

Rather, Amirpour has taken a range of different styles and influences and made them all work towards a common goal: in this case, the goal being the film’s all-encompassing sense of foreboding atmosphere. Along with the more traditional indie influences, there are several strong, direct nods to the ’80s youth films of John Hughes (the lovely scene involving Arash, the Girl, a mirror ball and the White Lies’ song “Death” is one of the best examples but certainly not the only one), as well as a strong Spaghetti Western undercurrent (the wonderfully evocative score, locations and sense of big, empty spaces is pure Leone, through and through). On paper, Amirpour’s debut might sound like a rather head-scratching gumbo but the results speak for themselves: thanks to the Iranian-American filmmaker’s deft touch, everything comes together beautifully, giving the film the sort of unifying style befitting something like Jeunet’s exquisitely-crafted fantasias.

While the evocative score and beautiful cinematography (Lyle Vincent, who also shot the upcoming Cooties (2015), is an absolute wizard with a camera) help to give the film a sense of dreamy unreality, the acting keeps everything from dissolving into just another morass of pretty images. Marandi is a suitably cool, aloof “antihero,” while Manesh brings enough genuine regret to his portrayal of the sad-sack, aging junkie to make his character decidedly more complex than he might have been. Rains brings an interesting, almost empathetic quality to his portrayal of the sleazy pimp/dealer, calling to mind a less outwardly insane version of Gary Oldman’s iconic Drexl.

Most impressive, however, are Mozhan Marnò as the melancholy Atti and Sheila Vand as the titular vampire. In both cases, the actresses do a tremendous amount with as little as possible: Marnò is able to express entire worlds of sadness and sensuality with nothing so much as a half-smile and a look from her piercing eyes, while Vand’s portrayal of the Girl is nothing short of ethereal and completely alien. In many ways, Vand’s Girl is similar to Scarlett Johansson’s Female in the similarly eerie Under the Skin (2013): other-worldly, curious, nearly mute and of constant interest to the males around them, the Girl and the Female could certainly share a common bloodline, even if their ultimate goals differ wildly.

Amirpour’s hazy film is many things (seductive, sad, odd, cool and hypnotic being but a few) but it also manages to nail one of the most important aspects of any horror film: when necessary, the film is also genuinely scary. Although the Girl’s attacks have a tendency to rely on some decidedly stereotypical musical stings and old-as-the-hills “scary voices,” the pacing, framing and sense of impeding dread are all masterfully executed, resulting in some great, unique scares. The scene where the Girl stalks a young street urchin is a virtual master-class in how to build and execute: the fact that Amirpour also manages to throw in a clever reference to Fritz Lang’s child-killer classic M (1931) is only frosting on a very tasty cake.

Despite being thoroughly impressed by A Girl Walks Home Alone at Night, there were a few elements that let a bit of air out of the proceedings. The aforementioned vampire stereotypes are problematic only because the rest of the film is so clever: at times, relying on the same stock clichés as other vamp films does more to pull Amirpour’s film down than it does to unite it with a common cinematic sensibility. I was also less than on board with the more verite, handheld-shaky-cam style of certain scenes, usually those involving Hossein’s drug use and withdrawal pains. Not only was the handheld style a distinct step-down from the gorgeous cinematography but the “drug scenes” had a different flow and pace that jarred against the rest of the film’s more dreamy atmosphere. In truth, all of these moments could have been cut without damaging the rest of the meticulously crafted narrative.

All in all, Amirpour’s debut feature is a real showstopper, the kind of film that kicks in the door and practically demands your undivided attention. While her debut was set in Iran (although filmed in California), Amirpour’s next film will, apparently, be a “dystopic love story, set in a cannibal compound, in a Texas wasteland,” featuring the combined talents of Keanu Reeves, Jim Carrey, Giovanni Ribisi, Jason Mamoa and the always amazing Yolonda Ross. In other words, it looks like Amirpour is going to continue her fearless genre-splicing. I’m willing to wager that her next feature will grab the world by the scruff of the neck and shake it silly. If it’s half as impressive as her debut, I’ll be the first person in line.