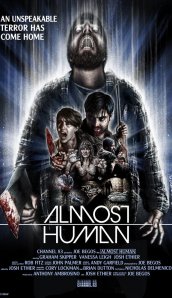 It’s not much of a secret that modern horror productions seem to be particularly enamored with the 1980s. Whether filmmakers are crafting straight-up remakes of popular ’80s titles or crafting films that are, basically, homages to ’80s horror, such as Gutterballs (2008), The House of the Devil (2009) or Hobo With a Shotgun (2011), the decade between Friday the 13th (1980) and Puppet Master (1989) certainly seems to be fertile soil, as of late. My theory on the reasoning behind this is pretty simple: as the folks who grew up on ’80s horror get older and move into positions where they can begin to create their own content (directors and writers, for sure, but I’m thinking specifically of producers and studios, here), it’s only natural for them to return to the stuff that first fired them up as kids. Whereas previous generations might have been influenced by weekly serials, ’60s-’70s pop-culture/societal issues and the Cold War, the generation of filmmakers who came of age in the ’80s were influenced by their own particular set of issues and found comfort in their own “new” subgenres, such as slasher films and graphic sci-fi/horror combos like Creature (1985) and The Fly (1986). When it finally came time for the “children of VHS” to make their own films, it shouldn’t be surprising that they returned to their formative era: once the folks who grew up in the ’90s begin to take over, we should be seeing lots of rebooted ’90s properties (there’s already a Scream TV series in the works, so the cycle appears to have begun a little early). Life, as Stephen King so eloquently put it, is such a wheel that it always, in the end, comes round to the same place again.

One-man wrecking crew, Joe Begos, is a little young to comfortably fit within my above theory (he was born in 1987, making him a good decade younger than his “peers”) but he fits the bill so perfectly that he must be an old soul. The writer-director-producer-cinematographer-camera operator behind Almost Human (2013) announced his entry to the world of feature filmmaking with a sci-fi horror movie that could have fit perfectly within the ’80s, sandwiched somewhere between Xtro (1983) and The Hidden (1987). Far from being just a clever approximation of a bygone decade, however, Begos’ film manages to combine all of the necessary ingredients (rudimentary acting, gory practical effects, plenty of action sequences, goopy makeup, intense violence) with a loopy sense of energy and comes up with something that’s suitably rough but just endearing enough to make you want to write Begos’ name on your Trapper Keeper. If ever there were a new genre filmmaker to watch, this guy might just be it.

Set in 1987, Almost Human kicks off in sci-fi high-gear with our terrified protagonist, Seth (Graham Skipper, looking like a slightly doughy Daniel Radcliffe), rushing to the cabin of best friend Mark (Josh Ethier) and his wife, Jen (Vanessa Leigh). Seth has just watched as mutual friend Rob was sucked up into the sky, via a shaft of blue light, and the event has him a little unsettled…actually, he’s in a complete panic but why split hairs? Mark is a burly, Brawny Towel-kind of a dude, so he doesn’t seem too ruffled over Seth’s jibber-jabber. Too bad, since Seth is absolutely right: there’s something otherworldly out there and it sucks Mark straight up into the sky, leaving his terrified wife and buddy standing around as the air is filled with intense screeching and blinding, flashing lights. Smash-cut to the title, white letters on a severe, black background and you might be forgiven for thinking you’d booted up the VCR instead of the Blu-Ray.

Two years later and Seth has been cleared as a suspect but nothing else has really gone right for him: Mark and Rob never turned up, Jen moved on to a new guy, Clyde (Anthony Amaral III) and Seth is prone to headaches, nose bleeds and a generally shitty lifestyle. After two years of relative “peace,” however, things have started to happen again: power outages have become common-place again and folks have been seeing weird lights in the sky. Something appears to be brewing and a pair of unfortunate hunters stumble, literally, right into the middle of everything when they happen upon Mark’s naked body in the middle of the woods. Mark seems to be alive but doesn’t seem quite right (he appears to be covered in amniotic fluid which, for a grown, naked man is usually a dead giveaway that shit is not, in face, okay): his eyes look weird, he seems to be in shock and doesn’t say much more than “Jen,” over and over. He also ends up killing the two hunters with his bare hands, which is probably as good an indicator as any that the Mark we now see ain’t the Mark we once knew.

After taking some clothes and a rifle, Mark proceeds into town, cutting a bloody swath through anyone unlucky enough to confront him. His goal appears to be some kind of reconciliation with his former wife but to what end? As Seth finally reconnects with Jen, the two are forced to team up against a truly otherworldly force: you see, Mark is finally home but he’s both a lot less and a lot more than he used to be. What exactly does he want? Why, he just wants what anybody wants: he wants to start a family with the person he loves, that’s all. Unfortunately, Mark’s notions of fatherhood are more in line with Alien (1979) than Leave It To Beaver, leading to a desperate, all-in fight to save humanity from an evil, insidious force from beyond the stars…a force that, like a shark, knows only a few imperatives: eat…procreate…repeat. Can Seth and Jen survive? Can any of us?

From the above description, one could be forgiven for believing that Almost Human is a pretty traditional Alien/Xtro clone about an alien creature that uses humans for feeding and breeding: in reality, the film is actually much closer to a traditional slasher film dolled-up in sci-fi trappings. This actually allows Begos to do two different things: he can create a more traditional slasher, right down to the emphasis on varied methods of death, and he can throw in enough body-horror/sci-fi ickiness to make sure that this doesn’t just read like a Friday the 13th clone. How’s it work out? Pretty damn nicely, to be honest. The slasher elements are strong and well-done, if not particularly inventive (axes, close-range shotguns, scissors and knives all get workouts) but they’re given an additional shot in the arm by the sci-fi elements. While this definitely helps reign the film’s budget in (Begos, like other low-budget horror filmmakers, has learned that the cheapest villains are always the ones who look the most like us, even if they’re filled with aliens/ghosts/mystery juice/a dose of the crazies), the mixture is good enough that it never feels like a cop-out. Indeed, Bego’s sci-fi elements lead to some of the film’s strongest, strangest scenes such as the ooky “pod people” and Mark’s attempted rape/impregnation of Jen via nasty alien tube thingamabopper. Too many scenes of Mark trooping around with a glare and an ax and we get a pretty generic “dead teenager” film: too much outer space mumbo-jumbo and we get the equivalent of one of Corman’s micro-budget ’80s sci-fi curiosities (many of which were the Asylum/Syfy films of their era, as it was). It’s to Begos’ immense credit that the film always feels perfectly balanced: it always feels like a cheaply made B-movie but never feels awkward or disposable.

From a filmmaking standpoint, Almost Human can be hit-or-miss but most of the issues can be chalked up to “first-time filmmaker jitters” or any of the woes normally associated with micro-budget productions: the acting is pretty iffy, the sound mix is absolutely awful (when will low-budget filmmakers ever learn that sound is too fucking important to be handled by whoever has a free hand?) and some of the plot developments felt completely arbitrary, even for a low-budget horror film. That being said, Almost Human never feels sub-standard and is never difficult to watch: whatever minor flaws the film may have, Begos’ cinematography and the film’s editing style aren’t two of them. I’ve seen plenty of low-budget horror films that are practically painful to sit through: wildly inconsistent acting, poor lighting, crappy camera-work, lame scripts and ridiculous CGI effects. While Begos’ film isn’t a masterpiece, it also doesn’t fall prey to any of these potential deal breakers. The acting may be rough but it’s consistently rough, which makes it a lot harder to notice, ironically enough. The lighting and cinematography are good, as are the practical effects (truth be told, the effects work is actually very good, budget notwithstanding) and the script is solid, if less than spectacular.

Ultimately, as a life-long horror fan, it was impossible for me not to be suitably impressed by Begos’ feature-film debut. While the film was far from perfect, it also revealed a genuine love of the genre and an inherent ability that speaks extremely well for future projects (Begos interned with Stuart Gordon, which may go a long way towards explaining not only the younger filmmaker’s “older” aesthetic but also his affinity for nasty effects work). Begos may have been all of three years old when the ’80s slid into the ’90s but his aesthetic (both visually and thematically) is strictly old-school video store. When a 27-year-old writer/director includes a credit listing for a “Fake Shemp” in his debut film, let’s just say that it’s pretty obvious his head (and heart) is in the right place. Anyone who grew up in the era of direct-to-VHS shockers, low-budget slashers and ultra-gory sci-fi chillers should find something to like about Begos’ Almost Human. If you require the relentless polish and shine of “modern,” CGI-endowed horror films, however, look elsewhere: Begos ain’t for you. For me, however, I’m gonna be sure to keep the kid in my sights: after all, if Almost Human is the first lap, I can’t wait to see how this race progresses.