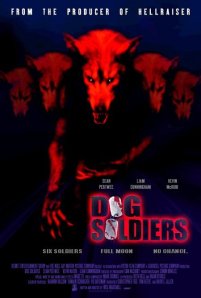 Like horror-comedies, action and horror hybrids walk a pretty fine line: too much of the action side of things and you get, well, an action film. A film which features endless scenes of zombies engaged in bone-crunching MMA action might be thrilling but it probably won’t be very blood-chilling. Likewise, traditional zombies that pop out of the background, stumble around and bite people might be horrifying and blood-chilling but probably won’t elicit the kinds of fist-pumping responses we might get from our mixed-martial artist gut-munchers. It’s a real formula, in a way, a formula which very few films really get right. The gold standard for these types of horror-action hybrids, as far as I’m concerned, is James Cameron’s classic Aliens (1986), the direct sequel to Ridley Scott’s horrifying sci-fi classic. Coming in at a close second, however, would have to be writer-director Neil Marshall’s extraordinary feature-film debut, Dog Soldiers (2002). Soldiers fighting werewolves? It doesn’t get much more thrilling than that, friends and neighbors.

As befits its no-nonsense style, Dog Soldiers jumps us into the action fairly quickly and keeps the accelerator floored for the majority of its running time. A small squadron of British soldiers, led by Sgt. Harry Wells (Sean Pertwee) and including Pvt. Cooper (Kevin McKidd) among their ranks, are in the Scottish Highlands for a run-of-the-mill training exercise. They seem to be a good bunch of guys, close-knit and good at what they do: we’ve already spent a little time with Cooper as he tries out for a Special Forces position and know that he’s a helluva fighter with a strong moral center and a particular respect for dogs, which seems to befit the protagonist of a werewolf film.

In short order, our intrepid group of soldiers begins to get the idea that things might not be as copacetic as they originally thought: they constantly hear odd noises in the surrounding forest and someone/thing tosses a slaughtered cow in their general direction, which would be enough to unnerve just about anyone. The situation gets even more extreme once they stumble onto the destroyed campsite of Capt. Ryan (Liam Cunningham) and his Special Forces unit. Ryan was the son of a bitch from the intro to shot the innocent dog but he appears to have seen much better days: he’s cut up pretty bad and looks as white as a ghost. He’s also babbling that “They tore them apart!” and the even more sinister, “There was only supposed to be one!”

Faster than you can say “Full moon,” the squadron are under siege and end up taking refuge with a passing Good Samaritan (Emma Cleasby) at a nearby abandoned farmhouse. As the enraged werewolves try to storm their meager safe house, the soldiers must band together against a foe that seems to be not supernaturally strong but also unbelievably cunning and vicious. There’s more than meets the eye here, however, and the odious Capt. Ryan appears to be right at the very heart of the mystery. What is the secret behind their hirsute attackers and will any of them survive to greet the new day?

Horror films have incorporated action elements for generations but this really became explicit with the rise of horror franchises, such as Friday the 13th and A Nightmare on Elm Street, in the ’80s. One of the conventions of these type of films, perhaps best exemplified in something like A Nightmare on Elm Street 3: The Dream Warriors (1987), are the scenes where the protagonists engage in heated battle with the main villain. These “action” moments are almost always qualified, however, with the knowledge that the “normal” people are never a match for foes like Jason or Freddy: they might temporarily get the upper hand (at least until the finale) but they’re way to “wimpy” to ever pose any real threat to these super-strong monsters. This is one reason why Scott’s Alien (1979) can be considered a horror film, whereas Cameron’s follow-up is distinctly horror-action: in Alien, the human characters (with the exception of Ripley) are all too weak to even finish off one Xenomorph, let alone a handful of them. The hat-trick that Aliens pulls, then, is to give us a group of protagonists who are utterly and completely badass: Space marines, as it turns out, and set them loose against the alien menace.  This way, we don’t question when the marines are kicking alien ass up one side and down the other (although this doesn’t happen quite as easily as I’ve, obviously, made it sound) because that’s what rough-and-tumble space marines are supposed to do: kick ass.

By making our protagonists tough-guy soldiers, Dog Soldiers levels the playing field quite a bit and allows us to suspend disbelief for the resulting action sequences. We don’t question that these guys have sharp reflexes and are able survivalists because, well, that’s kind of what we expect of soldiers. Since the opponents are more evenly matched (at least slightly more, as the werewolves are still towering, mountainous and furry buzzsaws), this allows for a more even balance between the action and horror elements. There are genuine horror elements in the film, not least of which is the ultimate “reveal” about the werewolves identities, which are allowed to play out at a more leisurely pace. For the most part, however, Dog Soldiers definitely plays like one all-out action sequence after another, similar to the way that Dario Argento liberally sprinkled murder set-pieces throughout his early classics.

For a debut film, Dog Soldiers is a remarkably assured and nearly flawless construction. Marshall also handled the editing of the film and displays a deft talent for putting action scenes together in fast-paced and evocative yet clear ways: this isn’t the chaotic chop-chop editing of Greengrass’ The Bourne Ultimatum (2007) but something that’s altogether more fluid, with characters being much more delineated on the screen. The cinematography, by extension, is also crystal clear and sharp: Sam McCurdy, the director of photography on all of Marshall’s films, thus far, has a real eye for color and detail that gives the proceedings a rich look.

Effects-wise, Dog Soldiers is a complete marvel: the violence is sudden, harsh and well-done, while the creature effects are simply stunning, recalling nothing so much as Rick Baker’s groundbreaking work on The Howling (1981). Unlike films that hide their monsters behind shadows and off the edge of the frame, Dog Soldiers is (rightfully) proud of its lycanthropes and takes every opportunity possible to trot them before the camera. Thanks to the stellar effects work, the creatures look equally imposing whether shot in a long shot or in close up: you won’t see any zippers on these costumes.

One of the most important aspects of any “squadron-based film,” of course, is the effectiveness of the ensemble cast: as with everything else, Dog Soldiers knocks this out of the park. Sean Pertwee does a great job as the Sarge who just wants to get his guys out of the shit and Kevin McKidd (from TV’s Rome) injects enough grit into his performance of Pvt. Cooper to prevent the character from seeming like too much of a “goody-goody” cliché. Cunningham is a rather teeth-gnashing, over-the-top villain, but the performance ends up working, perhaps because it gives the group someone entirely more “manageable” to fight against.

One aspect of Dog Soldiers that sets it a bit apart from similar films (and parallels it with Cameron’s Aliens) is the film’s overall serious tone and intent: while there are the occasional clever one-liners and cheeky moments, the emphasis is definitely on adrenaline over the easy release that comic relief affords. Truth be told, the film’s funniest moment is also one of its most badass: as Spoon (Darren Morfitt) is about to be devoured by a werewolf, he tosses out the immortal retort, “I hope I give you the shits, you fucking wimp!” Epic, indeed.

For my money, Neil Marshall is, hands-down, one of the single most impressive genre directors in the business. While I’ve enjoyed some of his films more than others (Dog Soldiers and The Descent (2005) occupy a pretty lofty perch, whereas Doomsday (2008) and Centurion (2010) reside a bit closer to solid ground), I’ve never been anything less than completely entertained with any of his work: he’s the kind of director that can get me excited for any project, sight unseen, and is a filmmaker that I expect to follow for several good decades to come. It’s always handy, however, to go back to the beginning and see how it all started. For Marshall, it started with this thrilling, edge-of-the-seat classic about werewolves and the soldiers who fight them and it doesn’t show any signs of stopping anytime soon. Utterly essential for genre fans and anyone who relishes a ripping good, military-themed action film.