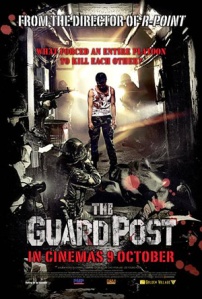 If location is king, in horror films, than the oppressive, claustrophobic, abandoned guard post that serves as the setting for Su-Chang Kong’s The Guard Post (alt title: GP506) must be some kind of an emperor. Looking like some creepy mash-up of an insane asylum and old-school prison, the titular guard post is one sprawling mess of endless corridors, mysteriously closing steel doors and oddly oozing pipes. To add to the overall effect, the South Korean guard post is situated directly across the DMZ from the opposing North Korean guard post, with the live-wire tension from both countries never more than a hair-trigger away. It would make a helluva setting for any film, let along a horror film, and Kong uses it to masterful effect in his paranoid, grisly, kinda-sorta remake of John Carpenter’s The Thing (1982). If the actual film ends up being a rather jumbled, confusing but endlessly intriguing curiosity, let no one say that Kong didn’t wring every last drop of atmosphere from his location.

The film’s begins with a small troop of S. Korean soldiers pouring en masse into the titular guard post, GP506. At first glance, there definitely appears to be something wrong: despite the outpost’s “active” status, there’s no one around and the atmosphere is oppressive. Presently, the soldiers find the outpost’s occupants, hacked to pieces and stacked like firewood in one room, while a bare-chested soldier stands over them with a bloody axe, giggling. With that, we’re off to the races.

Sergeant Major Noh (Chun Ho-jin) is called in to investigate the incident, which carries a few qualifiers: since the head of the guard post, 1st Lieutenant Yoo (Jo Hyun-jae), is the son of a high-ranking military official (and currently unaccounted for), special care must be taken. The wrong move, wrong conclusion or wrong accusation could end Noh’s career, he’s told, and a contingency plan is already in effect: he has until six in the morning (roughly 8 hours) to get to the bottom of everything before military “cleaners” will be called in to erase all traces of the incident. Noh’s first task is identifying the mysterious axe-wielder, a task that proves remarkably easy (Noh is quite the sleuth, apparently), but the knowledge ends up bringing more answers than questions. When another survivor turns up, claiming to be 1st Lt. Yoo, the plot begins to thicken even more.

In time, Noh comes to realize that something evil has happened to the men in GP506. As he unravels more of the mystery, via journal entries and video-cam footage, Noh gradually understands that something infected Yoo’s men, something that caused them to go berserk and kill each other…something that may very well still be hanging around. As the clock ticks down towards 6AM, the situation in the guard post becomes more critical: Noh’s men are starting to show symptoms of the mysterious disease, symptoms that manifest themselves in such delightful ways as self-mutilation and uncontrolled rage. Will Noh be able to get to the bottom of the mystery before he and all of his men are killed? What is the true secret behind the tragic events at GP506? And why can they only account for 19 of the 21 soldiers at the guard post? Noh will come to realize that the no-man’s-land inside GP506 can be far more lethal than the one outside its doors.

Thanks to a truly great location, The Guard Post practically drips atmosphere from the very first frame. For a time, the atmosphere and rather vague storyline work hand in hand but, over time, the increasingly complex structure (multiple flashbacks that bounce back to the present with no warning, right down to matches-on-action) begins to wear one down (or, at least, it wore me down). Add to this the fact that nearly every character in the film, with the exception of Sergeant Major Noh, are fairly anonymous and interchangeable and you get a film that can often be downright baffling. At several points in the film, I felt completely lost as to the timeline, although everything ends up making more sense by the end (The Guard Post is one of those rare films where looking back on it actually tends to fix, rather than find, plot holes). Nonetheless, the film proved to be a particularly disorienting experience, especially once I realized that the subtitles on the streaming version of the film were incomplete, at best. For the most part, only the first part of any character’s speech was translated, leading to such gems of information as “Are you telling me that this is…,” “I can’t believe that you mean…” and “Is this like…” When their dialogue was short, this wasn’t an issue. Whenever things got expository, however, it felt like I was reading only page out of a stack of stenographer’s notes. Essentially, any of the connective tissue that I needed to really “understand” what was going on was missing. I got the general idea, to be sure, but I’m still frightfully short on the specifics, which is kind of a frustrating experience.

As a whole, The Guard Post is well-made and certainly reminded me of Kong’s debut, the much better R-Point (2004). The cinematography is evocative and atmospheric and the creepy score adds a lot to the feel. On the negative side, Kong seems particularly fond of an irritating “slow-down” effect that frequently made the image glitchy and added nothing whatsoever to the overall feel. The makeup and effects are all pretty top-notch and exceptionally gooey, particularly in scenes such as the one where an infected soldier is, essentially, shot into multiple pieces. The violence is never too in-your-face, especially as compared to other South Korean genre offerings, but it’s never shied away from, either.

Ultimately, I found myself rather conflicted by The Guard Post. On the one hand, I feel that it nailed its atmosphere and sense of creeping dread perfectly and Chun Ho-jin was a remarkably charismatic presence as Noh. Unlike the other characters, Noh actually felt fleshed-out and multi-dimensional, making his ultimate journey that much more tragic. Too often, however, it was a situation where one anonymous character would reveal something to another anonymous character, while I would patiently wait to see how it all connected. There were actually several moments in the film that approximated the “Aha!” moments from medical TV shows like House and these always felt strange and out-of-place, as if I were constantly missing significant information. The Guard Post is one of the few films I’ve seen recently where the style wins out over the substance, simply by virtue of it being easier to “feel” what’s going on rather than to “understand” the events.

Fans of South Korean cinema, as well as anyone who truly appreciates the rather narrow subgenre of military-themed horror films (consider me a huge fan) will certainly find lots to appreciate in Kong’s most recent film. For those who may have a little less patience, however, there’s much of The Guard Post that will come across as a hard slog through rough terrain. Perhaps it says something that I appreciated the film enough to actually watch a physical copy, sometime, and see if that annoying subtitle issue goes away. As it stands, however, The Guard Post feels like two-thirds of a pretty good film in desperate need of that missing part.