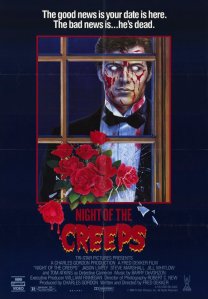 There’s a fine art that goes into making a truly fun, trashy B-horror film. If the film is too lo-fi, charmless and crude, it can be a chore to sit through. If the film is too goofy and self-aware, it can be overly silly and lightweight. Just right, however, like that proverbial porridge, and the mixture can be truly magical. I’ve had a big problem warming to modern-day B-films like Snakes on a Plane (2006) and Sharknado (2013), finding them to be way too self-aware and, quite frankly, overly obnoxious: shrill, unpleasant characters and ridiculously shoddy CGI don’t do much for me. For my money, I’ve always preferred B-movies from the ’80s, finding them to be warmer, more personable and less interested in self-reference than films from later eras. As someone who’s always appreciated practical effects, ’80s B-horror films provided plenty of memorable moments.

Perhaps Scream (1996) was too successful at pointing out the foibles of the horror genre because many horror films that followed it seemed less like individual pieces than attempts at genre critique and re-invention. The true key to making a good B-movie is to set out to make a good film, period: trying to make a good “bad” film is a fool’s errand. As far as I’m concerned, some of the most honest, entertaining, funny and well-made B-horror films have come out of the extraordinarily fertile time-period between 1983-1989. No discussion of this era, as far as I’m concerned, could be complete without giving due props to one of its most interesting filmmakers: Fred Dekker. Dekker may not have the deep and extensive filmography of some of his peers but he bears the distinction of being directly responsible for three of the best B-horror films of the 1980s: he wrote the screenplay for the minor/Miner classic House (1986) and wrote/directed the unmitigated awesomeness that were Night of the Creeps (1986) and The Monster Squad (1987). Although Night of the Creeps may not be quite as well-known as The Monster Squad (Drac, Frank and Wolfie trump alien slugs, apparently), it’s every bit as good: fast-paced, endlessly clever, funny and genuinely creepy, Night of the Creeps is the epitome of classic drive-in fare.

After a spartan credits sequence which recalls the credits for Carpenter’s Halloween (1978) in its simplicity, we’re tossed into outer space for a truly gonzo opening: fleshy, pink aliens that look like combinations of Teletubbies and Xenomorphs run around a space ship, shooting cheesy lasers at each other, on-screen subtitles translating their gibberish-speak. An alien escapes, via pod, leading us straight to Sorority Row, circa 1959, where we get some great black and white cinematography, plenty of clever references to ’50s genre films, an escaped serial killer (with an ax), necking teens on Lovers’ Lane, alien slugs and a jilted ex-boyfriend/cop. A slashing axe smash cuts straight to Pledge Week, circa 1986, complete with vibrant color. The whole opening sequence has taken all of ten minutes of screen-time and the message is clear: we’re in the hands of a master, so kick back and enjoy the ride.

In short order, we meet our heroes: Chris (Jason Lively) is the typical 1980s “nice guy/shy nerd” while his best buddy, J.C. (Steve Marshall) is the typical “quirky, brash, smart-assed, outsider best friend with a heart of gold.” They’re freshmen at Corman University, where Chris pines for the lovely Cynthia (Jill Whitlow). She’s a Kappa Delta, however, and dating the president of the obnoxious Beta fraternity, Brad (Allan Kayser). What’s a nice guy to do besides try to pledge the Betas and win her heart? Since this is an ’80s-genre film, however, it’s never going to be that easy. After the Betas send wannabe-pledges Chris and J.C. to go steal a body from the campus medical lab, things really start to warm up: literally, as the cyrogenically-frozen body they steal (a body that astute viewers should remember from the opening) seems to come to life and wander about the campus. Looks like a job for Det. Ray Cameron (Tom Atkins), the jilted boyfriend from the opening, who’s now a “damaged,” hard-drinking cop with a catch-phrase (“Thrill me”) and enough ennui to choke the aristocracy.

As Det. Cameron tries to figure out how a 27-years-dead corpse just gets up and walks away, Chris and JC begin to notice strange things happening around campus. Soon, Corman University is in the grip of a full-bore alien-brain-slug invasion (another alien-brain-slug invasion? Geez…) and it’s up to our heroes, along with Cynthia and the cynical detective, to make it all right. What happens when the brain-slugs come upon an entire overturned bus full of frat boys, as well as one long-dead axe murderer? Well, let’s just say that all hell breaks loose and leave it at that. Love…duty…pledging…Bullwinkle Moose…brain slugs…alien bounty-hunters…it’s just another day at good ol’ Corman U!

If the opening featuring the Teletubbie-esque aliens was no giveaway, let me be a little more clear: Night of the Creeps has its tongue planted so firmly in its cheek that it pokes through the other side…and that’s a distinctly good thing. Not only is the script and dialogue genuinely funny (Det. Cameron is a hoot and J.C.’s wisecracks land more often than they miss) but the film possesses a level of self-awareness that manages to skip right past “easy, obnoxious references” (although there are plenty of those) and straight to the core of traditional B-horror/sci-fi films. Across the board, Night of the Creeps manages to nail its various targets quite ably: one of the best examples is the exceptionally broad, silly acting that characterizes the opening ’50s-era footage. While the performances would be eye-rolling in any other context, they’re a perfect fit for the kind of cheesy ’50s-sci-fi/drive-in fare that Dekker and crew are trying to reference. Likewise, the “present-day” stuff perfectly references various horror products from the ’80s without losing the cheerful, goofy tone of the earlier material. It’s a delicate balancing act but Night of the Creeps manages to not only reference but subtly comment on these different eras (the black and white cinematography is, of course, just more icing on the cake).

One of the most obvious in-jokes in the film, albeit a joke that’s revealed gradually, involves the names of the various characters. The film takes place at Corman University, which should be a pretty easy “get” for most casual fans. Beyond that, however, it becomes a bit of a free-for-all: James Carpenter “J.C.” Hooper…Chris Romero…Cynthia Cronenberg…Detective Landis…Sgt. Raimi…Det. Ray Cameron…it’s sort of a “greatest-hits” of ’70s-’80s genre greats. We even get the real thing, in a way, when Corman regular Dick Miller makes an appearance as Walter, the cop in charge of weapon lockup at Det. Cameron’s precinct (fans might remember that Miller’s character in the classic A Bucket of Blood (1959) was named Walter Paisley). The fan services bits like this are a nice touch and, although a bit heavy-handed later in the film (the scene where Chris and J.C.’s names are revealed is so on-the-nose that it spoils the gag just a little), give a nice sense of unity to the proceedings.

While many of the jokes in Night of the Creeps are related to the horror/sci-fi genre, there’s still plenty of general hilarity to be found throughout. Whether it’s Cro-Magnon football bro Steve’s amazing unibrow (seriously: this piece of facial fuzz deserves its own end credit), the bathroom graffiti that enthusiastically affirms that “Stryper Rules!” (cuz, you know, they never did), Det. Cameron’s wisecracks (“Thrill me” never gets old and leads to a truly fist-raising finale) or Chris explaining his misidentification of a particular frat house as “It’s all Greek to me,” Night of the Creeps constantly moves from one great, funny moment to another. By the time we get to the iconic scene where Det. Cameron gives the girls of Kappa Delta the good/bad news (“The good news is your dates are here…bad news is, they’re dead”), Dekker’s script has proven itself time and time again.

The key thing to look for in B-movies like this is always going to be the “fun factor” and Night of the Creeps is consistently off-the-charts in this area. This is the kind of film that’s perfect for a rowdy get-together, a weekend trash-movie marathon or a drive-in in the heart of summertime. While the film doesn’t necessarily shy away from gooey special effects, it doesn’t wallow in them, either: the practical effects, which feature future KNB founder Robert Kurtzman, are pretty great (particularly the eye-popping bit where the long-dead axe murderer gets a new lease on life) but they never choke the life out of the film.

As a whole, almost everything in Night of the Creeps works spectacularly well. The acting is uniformly strong (although Jason Lively’s Chris is a bit of a wet blanket), the aforementioned effects work is great and the cinematography, by industry vet Robert. C. New (Prom Night (1980), The Borrower (1991), Rapture-palooza (2013)), is uniformly excellent. Indeed, Night of the Creeps has to be one of the best-looking, most vibrantly colored B-horror films to ever grace the silver screen. Truth be told, there really isn’t much not to like here, although the ridiculously stereotypical Asian janitor, Mr. Miner (Robert Kino), comes perilously close to being in rather poor taste: it’s no worse than many ’80s-era depictions of Asian characters (and quite a bit more gentle, to be honest) but feels completely out-of-place in the film’s good-natured universe. That notwithstanding, however, Night of the Creeps is one of the very best B-horror films to come out of the 1980s. Whether you’re looking for a great way to kill time or a great way to get the party started, Dekker’s Night of the Creeps has you covered. In fact, I’m inclined to call it the “Citizen Kane of alien-brain-slug/zombie frat boy” films. If you can find a better one, I’ll buy and eat a hat.