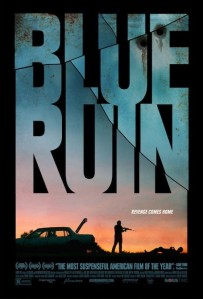 In many ways, movies make revenge seem like not only a good solution to a variety of problems but also the coolest, most thrilling and suitable solution possible. Oh sure, there are plenty of “anti-revenge” films (Cronenberg’s astounding A History of Violence (2005) comes immediately to mind) out there but they definitely appear to be outnumbered and out-gunned by the ones in which an individual gets terribly wronged and exacts bloody vengeance to even the score. Turning the other cheek might help calm a person’s internal struggle but doesn’t seem to produce much heat at the box office: audiences don’t want to see their heroes get stomped on without some sort of recourse.

If you really think about it, however, bloody, armed revenge isn’t quite as simple as the movies make it out to be. For one thing, most people (excepting members of the armed forces, police officers, militiamen/women and soldiers-of-fortune) are woefully ill-prepared to actually “take someone out.” It may be easy to off a virtual stranger in a first-person shooting game but it’s a whole other ball of wax when said stranger is actually standing in front of you, especially if they happen to be equally armed. For another thing, revenge tends to be a circular, Mobius-like concept: after all, if you’re willing to kill someone to avenge someone else, why wouldn’t your “victim” have people behind them who were equally eager to kill you? After all, regardless of how shitty, evil or worthless a person is, everyone has family and friends (or at least acquaintances) who might be willing to avenge them: an eye for an eye, after all, tends to make the whole world blind.

Writer/director/cinematographer Jeremy Saulnier’s sophomore feature, Blue Ruin (2013), is well-aware of all these issues, yet manages to whip this potential moral quagmire into a truly ferocious, unrelenting and bleak monster of a film. In the world of Blue Ruin, there is no wrong or right: there are only varying shades of gray, marginally more caustic “sins” and the nagging notion that the only inevitability in life is the ceaseless march to the grave. While Saulnier’s film has a definite protagonist, it doesn’t really have a hero: as we see, revenge doesn’t solve anything…it just drags the avenger into the muck along with everyone else.

When we first meet our luckless protagonist, Dwight (the endlessly expressive Macon Blair), he looks like the kind of down-on-his luck fella we might find begging for change on a freeway overpass: with his matted, unruly beard and propensity for breaking into houses to bathe and steal clothes, Dwight looks like he fell off the ladder of success and hit every rung on the way down. When Dwight is picked up for vagrancy by a friendly cop, however, she drops a hint to the rest of the puzzle: “someone” is getting released from prison, a someone who Dwight seems to be very interested in. When Dwight buys a map, gets in his beat-up car (his only possession) and attempts to steal a handgun, we get the nagging suspicion that our “hero” might not have been on the mysterious “someone’s” visitor list in prison.

Sure enough, we get validation of Dwight’s intentions when he tracks the recently released inmate to a dingy bar bathroom and stabs him in the head during a horrendously botched assassination attempt. Turns out that the mysterious man is Wade Cleland, the very same individual who mercilessly killed Dwight’s parents. After killing Wade and escaping via a stolen limo, Dwight hightails it to his sister’s place: Sam (Amy Hargreaves) hasn’t seen Dwight in years and is less than thrilled to see him now, particularly once he explains how he just slaughtered their parents’ killer in cold blood. Sam has kids, which adds another layer to her upset at the situation: “I’d forgive you if you’re crazy but you’re not: you’re weak,” she tells him.

As can be expected in situations like this, Wade’s got quite a few folks who are more than a little upset to bury him, not least of which is his equally larcenous family. Brother Teddy (Kevin Kolack) is the first to come hunting for Dwight but sisters Kris (Eve Plumb) and Hope (Stacy Rock) might just be more deadly. Throw in slightly nerdy brother, William (David W. Thompson), and Dwight has quite a stacked house against him. Lucky for him that he also has a friend in the person of Ben Gaffney (Devin Ratray), an old friend who saves Dwight’s life, gets him a gun, a place to hideout and some pretty sage advice: “I know this is personal…that’s why you’ll fail. No talking, no speeches…you point the gun, you shoot the gun.”

With his back to the wall, Dwight must now do everything he can to prevent harm from coming to Sam and her kids. This, of course, isn’t the easiest course of action since the Clelands are now in a complete blood frenzy: they never reported the murder to the authorities, meaning they plan to keep the whole incident in-house. Dwight will have to follow his initial actions through to their logical conclusion, leaving us with this impossible question: how many people must die before the scales are evenly balanced on both sides? Is one life worth more than another? Are “bad guys” really bad when the camera’s not pointed at them or are we all “bad guys” to someone else?

I’ve had my eye on Jeremy Saulnier ever since I fell in love with his debut feature, the outrageously great Murder Party (2007), so I expected really great things from his follow-up. Luckily, Blue Ruin managed to either meet or blow-away all of my expectations. Saulnier’s cinematography is absolutely gorgeous, giving the film a rich, full look that belies its low-budget. He manages to make the film’s color palette an integral part of its theme: true to advertising, the film does have a pretty “blue” look, which ends up being extremely evocative. The script is also extremely tight and well-written: doing away with the needless “placeholder” dialogue that tends to wreck other indie films gives Blue Ruin a lean, mean feel that’s endlessly cinematic: there’s nothing about the film that screams “amateur” or “student” production, unlike many of Saulnier’s peers.

While the film can be intensely violent, there’s no glorification of said violence whatsoever. The scene where Dwight stalks and kills Wade is clumsy, violent and messy: rather than coming across as some sort of “Liam Neeson lite,” everything about Blue Ruin feels as if it’s tied into the real world. When Dwight stares in horror at the mess that Ben’s gun has made of someone else’s head, Ben nonchalantly replies, “That’s what bullets do.” This isn’t the “harmless” violence of old Westerns and gangster flicks where folks get shot and fall down, bloodlessly. These are not trained hitmen spouting pithy quips back and forth, in between the carnage: this is the kind of brutal, no-holds-barred violence that real people might engage in, folks who bleed, sweat and cry in ways that “cinema folk” usually don’t.

While the acting is pretty stellar across the board, Macon Blair’s performance as Dwight is an extra-special treat: there’s nothing about Dwight that feels stereotypical or redundant. Indeed, one of the scenes that could have come across as the silliest (the obligatory “shaving the beard” scene) packs a real wallop since we (literally) see Dwight go from being a completely fucked-up adult to a scared kid in seconds flat: beardless Dwight looks nothing like bearded Dwight, in the same way that his need for revenge has stripped away his former innocence. It’s like stepping into a time machine and ends up being one of the film’s smartest elements.

Truth be told, Blue Ruin is just about as close to perfect as this type of film gets. While the character development could have been a little more subtle (we basically get the entire backstory in one massive info dump, thanks to Teddy), the film throws in some genuinely ingenious twists, including a major one that puts a whole new spin on Dwight’s quest for revenge (sometimes, bad things only look bad from your angle: what may seem like senseless violence might actually be someone else’s quest for revenge). The acting is superb, the film is exquisitely crafted and chugs along with a truly breath-taking sense of urgency. Full of thrilling action sequences but with its head firmly screwed-on, Blue Ruin is that rarest of beasts: an intelligent, grim, relentless action film that does everything in its power to strip the cinematic stardust from previous revenge films.

While there’s nothing glorious about the violence in Blue Ruin, there’s something truly glorious about the film, itself. Be sure to keep an eye on Saulnier: all signs point to this guy taking the world by storm and you’re gonna want to be on his team when he does. Utterly essential viewing and one of the best films of 2013, hands-down.