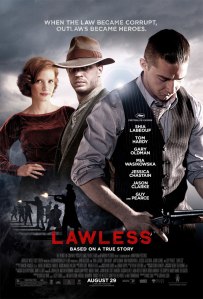 There are some writer/director relationships that end up bearing more interesting fruit than others and the pairing of Australian director John Hillcoat and post-punk savant Nick Cave is certainly one of those. Beginning with the brutal Ghosts…of the Civil Dead (1988) and continuing on into the equally raw The Proposition (2005), Hillcoat and Cave have proved a formidable team: Hillcoat is a masterful director who’s able to wring genuine pathos out of Cave’s often unpleasant, animalistic but eternally vital characters. Stylistically, Cave’s voice approximates Cormac McCarthy’s tales of moral decay, explosive violence and doomed fatalism, which are only complimented by Hillcoat’s panoramic, sweeping visuals. When it was revealed that Hillcoat and Cave’s next pairing would be an adaptation of Matt Bondurant’s novel about his bootlegging family, The Wettest County in the World, I was interested to see how the two native Australians would be able to bring their particular vision to bear on Prohibition-era rural Virginia. Turns out, there’s still plenty of brutality to go around, although Lawless (2012) ends up feeling like a much different beast than either Ghosts…of the Civil Dead or The Proposition.

Lawless involves the various machinations of the Bondurant family: brothers Jack (Shia LaBeouf), Forrest (Tom Hardy) and Howard (Jason Clarke). The brothers run one of the biggest, most impressive bootlegging operations in rural Virginia and are something of local gods, particularly when one factors in the local legend about the Bondurant’s invincibility (an interesting hint of magical realism that also informed bits of The Proposition). Brutish, laconic Forrest is the defacto leader, although youngest brother, Jack, is our entry point into the story. He’s the “new generation,” as it were, and constantly strains at the restraints that he feels are placed by his more cautious older brothers. Jack also idolizes urban gangster Floyd Banner (Gary Oldman), a flashy, tommy-gun-wielding hothead who bears more than a passing resemblance to the legendary “Pretty Boy” Floyd. Forrest, for his part, just wants life to keep going as it has been: the family has managed to carve out their own piece of happiness and success amid the turmoil of the Great Depression and Forrest will do anything to protect their way of life.

Trouble, as it often does, ends up riding into town in the person of sleazy G-man Charlie Rakes (Guy Pearce). Rakes, all ash-white complexion, plucked eyebrows and fastidious dislike of dirt and germs, is a mealy-mouthed monster and just about as far from “law and order” as a lawman can get. Together with corrupt Virgina Commonwealth Attorney, Mason Wardell (Tim Tolin), Rakes is more interested in shaking the Bondurants down and taking a cut of their profits than he is in eliminating the run of moonshine from Franklin County out to the rest of the bone-dry state. Hard-headed Forrest won’t budge, however, initiating a war between the bootleggers of Franklin County and Rakes. As the casualties build up on both sides, the polar ends of the Bondurant clan must deal with their own issues: Forrest begins a halting, tentative relationship with Maggie (Jessica Chastain), a waitress at the Bondurants’ “bar,” while Jack tries to court Bertha Minnix (Mia Wasikowska), the virginal daughter of a local fundamentalist preacher. When Forrest is ambushed and injured during a liquor delivery that Jack was supposed to back him up on, Jack decides to strike a deal with Floyd Banner, which irks Forrest and creates a division in the family. As the corrupt feds close in and their fellow bootleggers either fall in line or are outright killed, the Bondurants must make a desperate last stand to preserve their way of life. Will Forrest be able to pulverize the problem into submission or has his luck (and invincibility) finally run out?

While Lawless has moments of abject brutality that nearly rival anything in Hillcoat and Cave’s previous films (the scene where Forrest beats ten shades of red out of a pair of barroom louts with some brass knuckles manages to be both immensely horrifying and primally satisfying, while the scene where Rakes’ men tar and feather a bootlegger is just horrifying), this is a much “softer” film than either Ghosts…or The Proposition. For one thing, Hillcoat and Cave break up the brutality with the twin romance angles, which bring some delicate balance to the proceedings: while the relationship between Jack and Bertha often feels a bit silly and clichéd, there’s some genuine pathos to the tender, wounded courtship between the formerly big-city Maggie and the resolutely grim Forrest. While neither romance ever really takes center stage, they both serve as decent enough ways to break up the near constant stream of beatings (poor Jack gets wailed on at least three separate times, including once by his own brother), shootings and stabbings, along with the odd rape and tar-and-feathering here and there.

While Lawless looks absolutely gorgeous (veteran French cinematographer Benoit Delhomme provides us with some truly striking, beautiful images, as well as a really evocative way with hard shadows and dark areas), the whole film is let-down by the often out-of-place acting. Hardy, in particular, is frequently kind of awful but there isn’t a single performance in the film that feels genuine or rings true. Perhaps the award here must go Guy Pearce, however, who plays Rakes right to the cheap seats and comes up with something akin to a mustache-twirling Bond villain. LaBeouf (who can be decent-enough, given the right role) feels severely light-weight as Jack and Jason Clarke gets so little to do as “other brother” Howard that I kept wondering if most of his character arc got left on the cutting-room floor. Only Chastain (who’s always been hit-or-miss for me) acquits herself admirably as Maggie: there’s genuine pain in her performance but there’s also some steel there, too, a fighting impulse that somehow seems both more real and more feral than the one ascribed to Hardy’s character.

With more fine-tuned, realistic performances, Lawless would be a much better film, although it’s still decidedly lightweight when compared to Hillcoat and Cave’s other collaborations. There were several points during the film, not least of which during a thoroughly unnecessary closing tag, where it felt like Hillcoat lets the material get away from him and the tone had a tendency to flop violently between breezy, musical montage action scenes and moments such as the one where a character is “reverse-gutted” from tailbone to neckbone. This back-and-forth was also evident, to a much smaller degree, in The Proposition but Lawless’ tone feels less structured and more haphazard. When the film works, it works spectacularly well: the combination of the Depression-era setting, extreme violence and a rousing bluegrass-ish score never cease to get the blood-pumping. When one steps back to examine the film as a whole, however, it seems to come up a bit short. It’s a pity, really: there seems to be a really intense, gritty story locked inside but the constant overacting took me out so often that I ended up viewing events in a much more clinical manner than I would have liked. The greatest criticism that I can level against Lawless is that, for the first time, Hillcoat and Cave appear to have created something that feels disposable rather than essential. Here’s to hoping that their next partnership bears better fruit than this one.