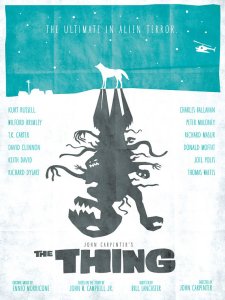 Although we horror film fanatics tend to be a fairly diverse bunch, there are still a handful of films that are pretty much accepted as canon by discerning viewers. This doesn’t, of course, mean to speak for everyone: many fans who call themselves horror fanatics have no interest in the genre’s history, past or anything more academic than watching the newest collection of gore scenes. I’ve long argued that horror is a genre and field as worthy of deep exploration as any other but it doesn’t change the fact that many viewers are still just after a visceral, momentary experience.

For every “casual” fan of the genre, however, there are plenty of what could best be described as “rabid” fans, folks who live, breathe, eat and sleep the stuff, tearing into everything from silent, black and white films to the newest CGI spectacles. For these fans, there are a few films that have managed to stand out from the crowd, proving endlessly influential and sources of much repeat viewings and continued exploration: Night of the Living Dead (1968), The Texas Chainsaw Massacre (1974), Halloween (1978), the classic Universal monster films, A Nightmare on Elm Street (1984), Peeping Tom (1960), Psycho (1960) and The Exorcist (1973) are but a small handful of the films that would probably show up on most hardcore horror fans “Best of” lists. One would be remiss, of course, if they didn’t also include one of the single most influential, popular and well-made horror films of the ’80s: John Carpenter’s ferocious, ground-breaking and utterly essential sci-horror masterpiece, The Thing (1982).

Although I’m pretty sure that almost everyone is, at the very least, familiar with the basics behind The Thing, the plot is pure simplicity. A team of American scientists at a remote research base in the frozen Arctic come into contact with something decidedly not of this world after they run into a group of Norwegian scientists who are violently pursuing a seemingly innocent dog. What at first seems like an extreme case of “snow madness” is soon revealed to be something much more terrifying: the dog is actually a grotesque, shape-shifting alien organism. The creature is cunning, quick and extremely hungry: with the Norwegians out of the picture, the Americans become the new snack du jour. As resourceful, gung-ho chopper pilot R.J. MacReady (Kurt Russell, in one of his most iconic roles) takes command of the increasingly paranoid and frightened group, he’s faced with a real devil’s dilemma: since the monster can look and act like any of them, how do the men really know which of them are from planet Earth and which are from a location just a little further away in our galaxy?

Full disclosure: I’ve been a pretty nutso fan of Carpenter’s classic ever since I first saw the movie, an impression that hasn’t changed one iota in all the years since. To be frank, The Thing is just about as perfect as a film gets, a classic case of intention meeting craft in a perfect creative spark. As I’ve gotten older, I’ve been able to appreciate different aspects of the film: when I was younger, I was all about the ooky effects, rewatching the key setpieces so often that I practically had the creature’s movements memorized. Now that I have a few years under my belt and have become a little more jaded regarding special effects in films, I find myself focusing more on the film’s exquisite use of location and the exceptional ensemble cast: I still dig the ever-lovin’ shit out of the effects scenes, don’t get me wrong, but the subtler aspects of the film are the ones that really push it from something special to something essential.

There’s so much about The Thing that exemplifies the film as one of the very apices of the horror film genre, a perfect storm of disparate elements. There’s Carpenter’s sure-handed, expert direction, of course: the auteur is one of the very best filmmakers for combining action and horror into one Voltron of awesomeness and he has a rare eye for background detail that adds immeasurable tension to every frame of the film. The film was shot by Dean Cundey, the masterful cinematographer responsible for everything from Halloween to D.C. Cab (1983) and Jurassic Park (1993): the film looks absolutely gorgeous and Cundey is expert at making the principal characters seem as small and insignificant against the unforgiving immensity of the Arctic wasteland as possible. The score was done by the iconic Ennio Morricone, the creator of some of the most legendary, unforgettable film scores in the history of the medium. While Carpenter’s self-made synth scores have always a particular highlight of his films, Morricone’s epic, sweeping score really adds a new layer to the proceedings. The groundbreaking practical effects work was done by industry pioneer Rob Bottin and would go on to influence at least the next generation of effects creators, if not more.

And then, of course, there’s that cast. Jeez…what a cast. Taking a cue from Ridley Scott’s Alien (1979), Carpenter stocks his film with some of the best character and genre actors in the biz, ensuring that no one comes across as generic “cannon fodder.” Kurt Russell…Wilford Brimley…Richard Masur…Keith David…Richard Dysart…Donald Moffat…each and every performer brings their A-game to the proceedings, adding up to one hell of an ensemble performance. The shining star of the group, of course, is Russell: while he’s been behind some of the most iconic action heroes in cinema (any conversation about kick-ass heroes that doesn’t include Snake Plissken is fundamentally flawed from the jump), MacReady is easily one of the highlights. We first meet Russell’s character as he plays computer chess: when the machine beats him, MacReady pours his bourbon down its access panel, shorting the computer out. Classic Kurt, in other words. Regardless of what’s happening on-screen, Russell is always the magnetic, undeniable center of everything: MacReady is one of the great screen creations and much of the credit for this must go to Russell’s inspired performance.

In fact, the cast is so perfect that my one quibble with the film’s actors has always been the same: I’m disappointed that there are no strong female characters here, ala Alien or Aliens (1986). There are certainly room for them, as the previously mentioned examples state. While some have pointed out that an isolated research station wouldn’t be co-ed, this has always seemed like a rather spurious assumption: after all, women have been successfully integrated into many such films (Aliens pretty much makes and ends this argument, thanks not only to Ripley’s character but the other female space marines, as well).

Integration complaint aside, The Thing really is a perfect film. It’s unbelievably tense, expertly crafted, looks amazing and is an absolute blast to watch. So many of the film’s setpieces have been burned into my brain over the years that it’s hard to imagine a world without them: the dog transformation…the hot wire and the blood…the defibrillator gone horribly amok…the spider-head…the cynical, utterly badass ending…the jaw-dropping reveal of the UFO…to be honest, a good 80% of the film plays like a highlights reel, similar to an award-winning band that scores eight hit singles out of ten on their album. I attempted to watch The Thing with as critical an eye as possible, this time around, but my earlier impressions were all just reaffirmed: this thing really is one of the all-time classics. I can’t even knock the film down a few points for being a remake of the Howard Hawk’s classic The Thing From Another World (1951), since it’s one of the few remakes to not only do justice to the original but to improve upon it in pretty much every way: Carpenter’s film has never felt like a cash-grab to me, like other remakes. The Thing has always seemed like a complete labor of love, pure and simple.

As someone who constantly finds myself re-examining and re-evaluating my impressions and opinions on films, I find that my “Best of” lists are, likewise, in constant flux. One thing that’s always remained constant, however, is my love and appreciation for Carpenter’s film. I’m not sure that I’ve ever left The Thing off of a list, to this point, and I can all but guarantee that I probably never will.