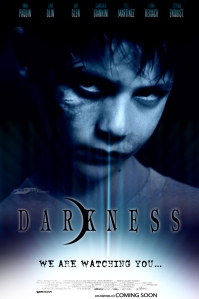 Back in 2007, before found-footage/first-person-POV horror films had become as standard a fixture in the industry as zombies were before them, Spanish writer-director Jaume Balagueró unleashed a feral little film known as [REC] (2007) on a largely unwitting populace. While the film would go on to produce three sequels (two of which were also directed by Balagueró) and an awful American remake (Quarantine (2008) is, without a doubt, one of the most unrelentingly shitty films I’ve personally sat through), I was taken enough with Balagueró’s style to check out his entire filmography.

Beginning with his feature-length debut, The Nameless (1999), and continuing through Fragile (2005), his short film To Let (2006) and the [REC] series, Balagueró’s films have been darkly stylish, atmospheric fables that combine the stresses of familial interaction with the traditional tropes of haunted house films. In Balagueró’s hands, the sins of the parents always come home to roost on their children, every dark, sinister room holds a secret and mysterious figures have an alarming tendency to slink around while the hapless protagonists are looking in the other direction. In many ways, Darkness (2002) is a synthesis of his myriad themes and influences, all top-lined by an all-star cast that includes Anna Paquin, Lena Olin, Iain Glen and Craig Stevenson. Primo Balagueró? For better and worse: absolutely.

Darkness details the adventures of a small family of American ex-pats who’ve been uprooted from their home and moved back to the father’s childhood stomping grounds in Spain. As horror movie families are wont to be, our happy clan is more than a little dysfunctional: father Mark (Iain Glen) suffers from Huntington’s Disease and has a tendency to either fly into manic episodes or collapse into painful-looking seizures; mother Maria (Lena Olin) seems distracted to the point of completely ignoring her children; teenaged Regina (Anna Paquin) is as overjoyed as any kid would be who has to leave all of their friends behind and move to a foreign country just as she’s about to begin her senior year of school; and young Paul (Stephan Enquist) keeps getting his colored pencils stolen by spooky ghost children. You know…the usual stuff.

As their new home, a sprawling, isolated country manor that practically screams “Here there be ghosts” begins to reveal certain creepy, sinister happenings at an alarming rate, Mark begins to channel ol’ Jack Torrance, leading Regina to fear for the safety of her brother, especially after he begins to develop unexplained bruises and injuries. While investigating the convoluted history of her family’s new abode with her new friend, Carlos (Fele Martínez), Regina begins to unravel a strange story that spans back 40 years and involves her father, his father (Giancarlo Giannini), a complete solar eclipse, insane cult members, murdered children and the end of the world. Will Regina be able to save her family from the grip of ultimate evil or will all of her best efforts, inadvertently, bring about the very apocalypse that she so desperately wants to avoid?

When Balagueró eases back on the narrative clutter, needless back-and-forth and pointless quick-cut editing, Darkness is actually a pretty decent “old dark house” film, albeit one with a “twist” that puts it firmly in the camp of someone like Adrian Garcia Bogliano (there are more than a few similarities to his Penumbra (2011), not the least of which is the eclipse element). The problem, as it turns out, is that the writer-director over-seasons this particular dish something fierce: the final 20 minutes are so cluttered, confusing, noisy and melodramatic as to be almost completely off-putting, despite the genuinely intriguing core story.

There’s just too much of everything: too much explanation, too much confusion, too many vague motivations, too much unrealistic interaction, too many noisy jump-scares and musical cues…stripped of all its bulky “clothing,” Darkness would be a much scrawnier film, to be sure, but it would also be one that could stand better on its own two feet. As it is, the narrative (and film) is too overladen to ever move far in any direction. It’s difficult to get fully invested in a story where new elements seem to pop up at random (the bit about the snake and the egg makes no sense, no matter how I try), while old standards like “characterization” leave and return like a wandering sleepwalker.

Lest I heap too much abuse on the cluttered narrative and stylistic issues (when the quick-cut editing falls by the wayside, cinematographer Xavi Giménez produces some suitably attractive, evocative images), Darkness is also plagued by some seriously odd, uneven performances. While Paquin has a few moments that strain credibility (her occasionally halting line delivery is a real head-scratcher), Glen is all over the place and Olin, despite her legendary status, is almost completely worthless. The character of Maria never makes a lot of sense, to begin with, but Olin’s totally “checked-out” performance does no one any favors. Each and every moment of her screentime is painful (for various reasons) and I never could see through to her character’s actual motivations: was Maria crazy? Did she hate her kids? Her husband? Did she actually care about any of it? Each and every reaction and bit of dialogue is so laissez-faire and noncommittal that Maria always seems superfluous to the larger story.

Glen, for his part, goes the full “Nicholson” here (as we all know, you never, ever go full Nicholson), which turns the film’s back-half into something of a poverty-row re-imagining of The Shining (1980): as Mark bellows, huffs, screams, rages and attacks doors with aplomb, in frantic pursuit of his wife and young son, it’s hard not to think back on the far-superior older film. Glen has moments that are nicely realized (unlike poor Olin) but he’s never a particularly believable character, which really hurts any identification we might have with him. On a lesser note, Mark’s Huntington’s Disease never seems to function as anything more than a plot device, leading him to act in whatever manner the narrative calls for at that time. For all the difference it makes, Mark could have been a recovering alcoholic, a schizophrenic or just really angry…like many of the film’s elements, the disease seems as arbitrary as anything else.

Despite my frustrations with Darkness, it’s still impossible to deny that Balagueró has some genuine skill, both as a writer and a director (here, he co-scripts with Fernando de Felipe). When the film is allowed to work on its own merits, there’s some undeniable power to be found: amidst the chaos and noise of the film’s climax, there’s some really interesting observations about familial duty, fate, the nature of reality and weird dooms-day cults. More’s the pity, then, that the whole thing collapses into a soggy mess of evil doppelgängers, frantic action, ridiculous proclamations (“Regina is in her house…in Hell!!!”) and haunted house conceits that would have been moldy decades ago (the scene where a character is pursued down a hallway by extinguishing lights is so well-worn that it’s threadbare).

As it stands, Darkness is an interesting enough part of Balagueró’s oeuvre, even if it never comes close to either its predecessor or the [REC] films that would follow. Think of it as a transitional film, a bridge between his more atmospheric chillers and the action-packed fare that would follow, that first tentative moment where one transitions from walking to running. While his future ended up suitably bright, there will always be a little Darkness in Balagueró’s rear-view mirror, for better or worse.