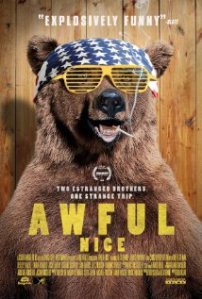 For anyone who grew up with a sibling, Charles Dickens’ famous quote from A Tale of Two Cities may be all too accurate: “It was the best of times, it was the worst of times.” While there may be no truer, closer friend than a brother or sister, these are also the people who know how to push our buttons better than anyone in this big, crazy world. An older sibling may prove to be a tyrant, while a younger sibling may have been a constant source of annoyance while we were young. The frustrating thing about families, obviously, is that we rarely (if ever) get to pick ours: that particular lottery was taken care of well before we had any say in the situation. Writer-director-actor Todd Sklar’s sophomore film, Awful Nice (2013), takes a look at a pair of estranged brothers who may just come to realize how invaluable they are to each other…if they can keep from beating the crap out of each other, that is.

Jim (James Pumphrey) and Dave (co-writer Alex Rennie, channeling Charlie Day) are estranged brothers who end up forced back into each other’s lives after their father dies and leaves them a dilapidated lake house in his will. Jim is the marginally more mature/responsible of the two, given that he actually has a wife, kids and full-time job, while Dave is more prone to eating donuts out of trash cans, stealing complimentary breakfasts from motels and living so far off the grid that he kinda seems…well…like a vagrant. Even though Jim and Dave haven’t seen each other in years, they manage to handily pick up their former sibling rivalry as if no time had passed, including all of the stupid challenges and dares from their childhood (the dinner scene that begins with a drinking challenge – water, beer, gravy – before turning into an arm-wrestling match that morphs into a fist-fight is a particular highlight). Jim has no time for Dave’s foolishness, while Dave can’t stand Jim’s condescending, superior attitude: nothing’s changed since they were kids except for the addition of facial hair.

After visiting their father’s lawyer, Jon Charbineau (Law and Order’s Christopher Meloni in an absolutely ridiculous wig and glasses), the brothers receive some money to renovate the house, along with an offer for Charbineau’s “personal” construction team to take over the renovations. Jim is all for the idea, wanting nothing more than to get the hell away from Dave and back to wife Michelle (Hari Leigh), who’s becoming increasingly annoyed over his absence from home, thinking he’s just using this as an excuse to bail on familial responsibilities. Dave, on the other hand, is so positive that he and Jim can renovate the wrecked house (think The Money Pit (1986) with better wiring) that he spurns Charbineau’s offer and jumps in headfirst, as it were. Taking the bait, Jim decides to stay and renovate the house, naively believing this to be a fairly simple task. Poor, poor, stupid Jim…

As Jim and Dave continue to work on the house, more and more things begin to go wrong: Dave’s flighty inability to focus on the task at hand leads to untold complications (he begins the renovation by spending $900 of their money on an arcade game, which doesn’t bode well); Charbineau’s construction crew, led by the quietly sinister Ivan (Brett Gelman) appear to be made up of Russian mobsters and don’t take kindly to Dave’s obnoxious attitude or desire to do the job himself; Jim runs into an ex-girlfriend, Lauren (Laura Ramsay), which complicates his present marital difficulties; and Dave falls for a waitress, Petra (Keeley Hazell), who may or may not be a Russian prostitute. In time, many of these disparate issues will come together in a perfect storm, forcing Jim and Dave to finally fix their hopelessly fractured relationship. Will it be too little, too late or will family always win out in the end?

While there’s absolutely nothing unique, ground-breaking or particularly fresh about Awful Nice, it does have a particularly potent ace up its sleeve: the film is very, very funny. Uproariously so, if I may be so bold. The script is exceptionally sharp and witty, which helps do a lot of the heavy lifting, but let’s give credit where it’s due: Pumphrey and Rennie are absolutely perfect as the feuding brother. Not only are the two actors individually funny (as mentioned, Rennie channels Charlie Day’s spastic insanity to near perfection) but they work beautifully as a comedy team. They actually seem like brothers, which is no mean feat, but they’re a perfectly synced combo, which is even more important. While the dialogue is consistently great, much of the film’s physical comedy is completely sold due to how in-tune the two actors are with each other’s comedic style: it’s the kind of complimentary acting that can be found in the best “buddy” films, such as The Odd Couple (1968) or Crosby and Hope’s “Road to…” pictures. The rest of the cast is just fine (although Meloni is so silly as to be almost trifling) but the film is dominated by its charismatic, dynamic leads.

When Awful Nice is funny, it’s very, very funny: there were moments during the film where I laughed harder than I had in some time (the bit where Dave sets off the airbag in Jim’s car by jumping on the hood is a neo-classic, as is the running gag where Jim constantly bops Dave in the head with an umbrella, to Dave’s growing irritation ). The film is never dumb, however (aside from Meloni’s ridiculous get-up), and just as apt to blindside with a genuinely impactful observation about Jim and Dave’s childhood or their miserable adult relationship as it is to throw in a scene where Dave gets his ass beat by a couple sneering yuppies. It’s this expert melding of the emotional and the silly that really drives the film: it’s never so lightweight that it floats away but this sure as hell ain’t On Golden Pond (1981), either. It’s a pretty perfect mix and one that I wish more modern “dramadies” would get right.

For the most part, Awful Nice is a pretty exceptional, modest little film. Not everything works, mind you, and there are a fair number of plot developments that just don’t go anywhere (in particular, the bit with Jim and his ex-girlfriend amounts to a red herring and the Russian construction crew is woefully under-utilized) but the film hits more than it misses and is genuinely funny, which can’t be stated often enough. I also appreciated the little absurdist elements that popped up here and there, never enough to take focus off the rest of the action but just enough to let you know that Sklar and Rennie have got more on their minds than just churning out a low-budget film. Awful Nice is gut-bustingly funny, full of heart and surprisingly sweet without ever becoming cloying: in other words, it was a pretty great little film and I eagerly await Sklar and Rennie’s next full-length. Let’s just hope that if Meloni’s in that one, he gets to keep the rug and Groucho glasses at home.