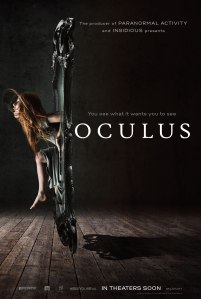 Is truth absolute or relative? It’s a question that philosophers and social scientists have been asking for pretty much as long as the disciplines have existed. If we perceive something as “true,” does that make it so? The vast majority of us can agree that 2+2=4 but is this because the math behind it is absolute or because enough people agree that it is to make it so? What if 2+2 actually equals 5 and we’ve all been deluding ourselves, accepting as “true” something that only exists thanks to our shared rationalizations?

The question of “What is truth?” or, in variation, “What is real?,” is one that films have been asking (and answering) practically from their genesis. When the Lumiere brothers first shocked audiences with the dread notion that an actual train might rampage from the screen straight into the theater, there was much discussion about capturing the “reality” of life and putting it on the big screen. Some fifty years later, legendary auteur Akira Kurosawa would explore the idea of absolute vs relative truth with his classic Rashomon (1950), which explored the vagaries of a single terrible crime through multiple, opposing points of view, leading audiences to wonder whether there could ever be “one truth” when multiple individuals are involved. And now, over sixty years past Rashomon, we once again visit the concept of truth with writer-director-editor Mike Flanagan’s stylish slow-burner Oculus (2013), in which childhood memories and fears come back to haunt the grown children, leading them (and the audience) to wonder just what is true and what is a horrible nightmare.

Tim Russell (Brenton Thwaites) has been under a psychiatric hold for years after some undetermined childhood trauma: after being deemed fit to re-enter society by his shrink (Miguel Sandoval), Tim must now make the difficult reintegration back into “the real world.” Luckily, he’s got his sister, Kaylie (Karen Gillan), for support: they both lived through the same trauma, so who better to lean on? When Tim moves back into the old family house with Kaylie, he ends up receiving a pretty huge shock: the supposedly cursed mirror that Tim held responsible for the tragic deaths of their parents is back in Kaylie’s possession. Kaylie, for her part, is revealed to be more than a little obsessive: while Tim has spent his years in the looney-bin trying to forget the evil mirror, Kaylie has spent the same amount of time tracking it back down, with the ultimate goal of destroying the cursed glass once and for all.

This, of course, is not as easy as it first seems: the mirror appears to possess a feral intelligence and ruthlessly protects itself, confusing both Tim and Kaylie with hallucinations and false memories. Or does it? You see, neither Tim nor Kaylie seem to be playing with full decks and we get the notion, early on, that all is not as it seems. Things become even more complex when we begin to get flashbacks of their childhood incidents, their individual memories of which completely contradict each other. Who’s actually telling the truth, Tim or Kaylie? Is the mirror actually haunted or are these just two very damaged individuals who need to be locked away from polite society? What actually happened to their parents all those years ago? And if the mirror really is malevolent…what does it actually want? By the film’s powerful twist conclusion, we’ll get the answers to all of these questions, along with a host of others that we didn’t even think to ask.

Mike Flanagan first came to my attention with the indie horror film Absentia (2011), a subtle, creepy little movie about what happens when a woman’s long-missing husband mysteriously shows up again, as if nothing had ever happened. While I enjoyed the ideas and measured pace behind Absentia, there was something about the film that just left me cold: I was left with the notion that Flanagan was a potentially fascinating writer-director who just needed a slightly better vehicle. I’m very happy to report that Oculus is, indeed, just that vehicle and manages to surpass his preceding film in every way imaginable.

Look-wise, Oculus is an elegant, stately affair that fits in nicely with the polished aesthetic of recent films like Insidious (2010) or The Conjuring (2013). That being said, the film is actually a good deal more vicious than either of those entries, coming in as a more intelligent, well-made variation on Alexandre Aja’s gore-athon Mirrors (2008). Oculus gets lots of mileage out of the notion that Tim and Kaylie might not be perceiving reality in the same way that we are: the thoroughly uncomfortable scene where Kaylie gets ready to take a big bite out of a juicy apple that’s probably a lightbulb is a real eye-opener. This particular conceit works so brilliantly in the film precisely because it’s so intrinsically tied with the notion of true: if we can’t believe what we see, how do we actually know what’s true and what’s an illusion?

Structurally, Oculus employs a dizzying melding of the past and present, as we witness two separate timelines (Tim and Kaylie as kids, in the past, and adults, in the present) play out, oftentimes simultaneously. By the film’s rollercoaster final third, the two timelines have become so connected that they seem to overlap and blur into each other: as Kaylie and Tim get more and more lost down the rabbit hole of their childhood, so, too, does the audience get more and more lost trying to figure out what’s taking place when. While this could have become unnecessarily frustrating and overly complex, the tactic works like a charm: the film is so tense and chaotic by the end that I was, literally, riveted to the front of my seat.

One of Oculus’ biggest assets is a whip-smart script, courtesy of Flanagan and co-writer Jeff Howard. Rather than dumbing things down for an (assumed) tuned-out audience, Flanagan floors it and lets spectators hang on for dear life: Oculus is absolutely not a film that rewards lazy viewing, as so much of the film happens in the margins. Oftentimes, what Kaylie and Tim don’t say to each other is more telling than what they do. There also seems to be a refreshing lack of holes in the storyline: while we’re still left with doubts by the end credits, the most important realization is that Flanagan and Howard had none…everything about Oculus speaks to careful planning and exact execution.

On an acting-level, Oculus is, likewise, rock-solid: Gillan and Thwaites make for an appealingly sympathetic pair of protagonists: even when they appear to be deep in the thrall of complete insanity, we really push for them to pull through. There’s a deep vein of tragedy that runs through Oculus (or, perhaps, fatalism?), similar to films like The Burrowers (2008). Thanks to the jagged performances and forbidding atmosphere, we’re never far from the notion that this all will end horribly: when it does, there’s not so much the idea of “calling the ending” as there is Shakespearian pre-destination. These characters will not fail because they are bad people: they will fail because they, like all humans, are fallible and bound by their fate. Oculus is one of the few modern horror films that actually earns the word tragedy, imbuing it with every inch of the classical definition it deserves.

All in all, Flanagan’s Oculus really is an exceptional, powerful film: it should easily appeal to fans of “prestige” horror films, despite the occasional gore scene that “goes to 11,” shall we say. There’s a rare intelligence and grace here that marks Flanagan as exactly the sort of filmmaker I was hoping he would turn out to be: with any luck, he’ll continue to create individual, memorable works like this for some time. While there will always be a soft spot in my heart for mindless slashers and creature features, I’ll take intelligent, mature horror like this any day. If nothing else, Oculus might make you think twice every time you walk by a mirror or catch movement out of the corner of your eye: like any good horror film, it burrows its way into your psyche, taking up residence in the attic of your mind like so many family ghosts.