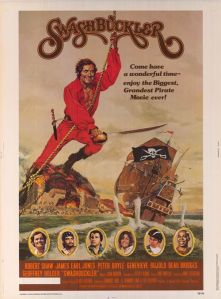 Most of the time, even if I can’t quite understand a film, I can at least get myself into the mindset of seeing where the filmmakers are coming from. This can apply to things as complex and fairly inscrutable as Primer, Upstream Colour or Sauna, as well as films that are relatively brainless but hopelessly complicated, such as The Last Rites of Ransom Pride, The Box or Stardust. In most cases, the filmmakers’ intents are relatively clear, even if their final product is hopelessly muddled or head-scratchingly confusing. Every great once in a while, however, I’m faced with a film that completely baffles me, not necessarily because I can’t follow the plot but because I have absolutely no idea what the filmmakers actually intended to do. These films, rare as they are, can either function as delicious treats or obnoxious puzzles, depending on how much collective good will the films manage to accrue across their running times. In the case of Swashbuckler, featuring the intriguing pairing of Robert Shaw and James Earl Jones, I found myself with but one coherent thought after the final credits rolled: what the hell did I just watch?

The film begins with pirate captain Ned Lynch (Robert Shaw) and the merry crew of the Blarney Cock showing up to shell a coastal fort, disrupting the planned hanging of fellow pirate Nick Debrett (James Earl Jones). Ned and Nick are old friends, of course, and what would any good adventure be without a good wingman? In no time, the pair are sailing the high seas, disrupting the dastardly activities of crooked governor Lord Durant (Peter Boyle) and earning the admiration of comely lass Jane (Genevieve Bujold). You see, Lord Durant is attempting to take over Jamaica, placing the islands under his iron-fisted, weirdly sadomasochistic control, and there are only three things that stand in his way: Ned, Nick and Jane. Hold onto your tri-cornered hats, ladies and gents: it’s gonna be an awfully bumpy ride!

Unlike other genuinely strange films, Swashbuckler actually has a pretty easily digestible plot-line: it’s just your basic pirates against the government tale, after all. Shaw and Jones are fantastic as Ned and Nick, possessing an easy rapport that marks the two as old, fast friends. Truth be told, Shaw and Jones are so good and so natural that Swashbuckler is never a difficult or unpleasant film to watch: it just never makes a whole lot of sense, that’s all. Bujold is good as the stereotypical noblewoman/firebrand but her part is pretty cookie-cutter for this type of film. The pirate crew, which includes familiar genre faves like Sid Haig and Geoffrey Holder, make a great team and many of the sword-fighting, swashbuckling scenes are quite rousing. That being said, however, the film still manages to stuff ten pounds of weird into a five-pound sack.

Without a doubt, one of the strangest, most jaw-dropping aspects of the film has to be Peter Boyle’s genuinely bizarre performance as Lord Durant. Boyle plays Durant like some sort of space alien martinet: his performance includes back-waxing scenes, bathtub romps, multiple yelling fits and more psuedo-sadomasochistic affectations than you can shake a switch at. The giddy apex of insanity has to be the part where Durant punishes his loyal second-in-command Major Folly (Beau Bridges) by having him remove his shirt while Durant’s weird assistant menaces his bare chest with a device that seems to be Freddy Krueger’s razor-glove re-imagined with spoons. Honestly. I couldn’t make this up if I tried, ladies and gents. Even better, the creepy assistant reappears during the climatic final battle, where he attempts to fight swordsmen with his spoon-glove hand-thing. The best way to sum this up, quite frankly, would be with a question of sorts: what the fuck?

We also get wonderful moments like the bit where Beau Bridges overacts so much that he actually cracks up his co-actors (no mean feat when everyone is chewing scenery by the yard), Anjelica Huston playing a mysterious, mute woman who goes by the name Lady of Dark Visage in the credits and Genevieve Bujold’s skinny-dipping for no apparent reason (although good ol’ Robert Shaw seems to get a couple of eyefuls. Shaw makes his grand entrance in the film wearing a skin-tight, bright-red jumpsuit that’s more Studio 54 than Blackbeard and the vast majority of the cast (main and supporting) spend the entire film with giant, goody grins plastered on their faces. Was everyone high on set? At the very least, I’m willing to wager that someone made use of a pretty decent-sized tank of nitrous: the looks on the various actors’ faces are positively beatific! Special mention must also be made of Geoffrey Holder’s Cudjo. Between his super-sized appearance and patented, booming laugh, Holder is a complete delight and the sequence where his acrobats help them infiltrate Durant’s compound reminds me of nothing so much as the various circus action scenes in Octopussy.

Ultimately, the main source of my confusion (Peter Boyle weirdness notwithstanding, of course) is the mixed tone of the film. At times, the film seems to be a fairly straight-forward, if rather silly, pirate adventure: nothing too strange there. At other times, however, the film mixes more straightforward, Goonies-esque action, comedy with straight-up, breaking-the-fourth-wall satire. There’s the aforementioned Beau Bridges performance (those other actors are definitely cracking up: I rewound and watched it just to make sure), as well as the scene where he attempts to fight off Ned and Nick in a low-roofed carriage, only to have his sword continually hit the ceiling whenever he draws it from his scabbard. More telling, however, is the climatic moment where Lord Durant meets his fate (no spoilers here, folks: if you didn’t see that one coming from the first frame, you weren’t paying particularly good attention. Boyle overacts like a champion, clutching his breast and lurching about as if performing a dinner theater version of Hamlet’s climax. The scene seems to go on forever, Boyle shamelessly mugging as if his melodramatic eye-rolling might stave off death, itself. Finally, he tumbles through a window, uttering the immortal final line: “Pull the curtain: the farce is ending!” Normally, I might assume this was just some attempt at a “badass” last line. As it stands, however, I find myself wondering if the filmmakers weren’t actually making some sort of comment on the film, as a whole. Was this supposed to be a farce all along? Had I actually missed something (or several somethings) along the way? Perhaps…but I’m not rewatching to find out!

At the end of the day, Swashbuckler is many, many things (including a tremendous mess) but it’s never boring. Most of the time, in fact, the film is great, goofy fun. Everyone involved, especially Shaw, seems to be having a blast and no one seems to be phoning in their performances. If anything, so much scenery is chewed that the poverty-row production values (the transfer is simply awful and the whole film has all of the visual panache of a dreary made-for-TV film) tend to fade into the background…at least somewhat. In this “glory day” of the “so-bad-it’s-good” film, where intentionally terrible movies are routinely churned out with a wink and a nod, it’s somewhat refreshing to see an honest-to-god B-movie that’s just what it advertises: a silly, goofy, fun time. I doubt if this film will ever hit anybody’s “Best of…” lists but I doubt if that’s why it was made in the first place. For my money? Swashbuckler ain’t a classic but it beats getting tortured with a spoon-glove any day of the week.