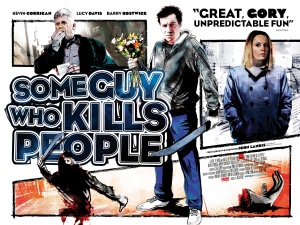 Sometimes, my initial assumptions about a film can be way off base. Take Jack Perez’s Some Guy Who Kills People (2011), for example. Based on the title, the presence of always-funny character actor Kevin Corrigan and Perez’s previous films like Monster Island (2004), Mega Shark vs Giant Octopus (2009) and Blast Vegas (2013), I was expecting the film to be a goofy horror-comedy, maybe something along the lines of Tucker and Dale vs Evil (2010) or the like. Instead, Some Guy…ended up being a fairly serious film with occasional surreal touches and played out sort of like a non-rape-oriented version of Clint Eastwood’s Sudden Impact (1983) with a male protagonist. In other words, I was way off base.

Right off the bat, we meet our protagonist, Ken Boyd (Kevin Corrigan). Ken is pretty much the definition of a schlub: he works at an ice cream parlor (part of his job entails wearing a ridiculous ice cream cone costume); only has one friend, co-worker, Irv (Leo Fitzpatrick); still lives at home with his mother (Karen Black), even though he’s in his mid-30s and has spent time in an insane asylum thanks to a mental breakdown and suicide attempt. He’s also plagued by recurring nightmares where he’s tied to a chair, tortured by a group of guys and doused in gasoline. Life, for Ken, is pretty much a continuous bummer.

One day, while working a birthday party in his ice cream cone get-up, Ken happens to run into one of the abusers from his nightmare. Ken fantasizes about putting a hatchet through the guy’s face and whatta ya know…the guy later turns up dead with a hatchet in his face. Seems a little suspicious but the town’s finest law enforcement officials are on the case: Sheriff Walt (Barry Bostwick), who’s also dating Ken’s mom, and Dept. Ernie (Eric Price), who’s so dumb that he makes Barney Fife look like a MENSA candidate.

In the meantime, Ken runs into the daughter that he never knew he had, 11-year-old whiz-kid Amy (Ariel Gade). Amy wants to get to know her dad, so he decides to (temporarily) move in with him. She also encourages Ken to break out of his shell and date Stephanie (Lucy Davis), the nice young woman who he previously met at the dead man’s birthday party. The bodies of Ken’s enemies continue to pile up around him, however, and it’s getting harder and harder for the Sheriff to keep making excuses. When Amy sneaks a peak at her dad’s coveted sketchbook, she sees some pretty dark drawings, including several that seem to prefigure the actual murders. Is Ken behind the murders, seeking to avenge unknown trauma from his high school years, or is there another, more sinister explanation?

In many ways, the underlying theme of Perez’s Some Guy Who Kills People can best be summed up by Sheriff Walt’s declaration that, “If thinking about killing a bunch of pricks made us guilty, we’d all be locked away for life.” He’s absolutely right: regardless of the specifics, I’m more than willing to wager that each and every one of us have wished grievous bodily injury to someone else, even if only from the safe constraints of our own imaginations. Humans thrive on wish-fulfillment: it gives us something to look forward to, even if our imagined goals are impossible, socially unacceptable or just plain stupid. Some Guys…works this angle to good effect, setting up a situation in which we witness bad people getting their comeuppance, similar to something like Bobcat Goldthwait’s God Bless America (2011). Perez is nowhere near the filmmaker that Goldthwait is, however, and Some Guy…ends up being a much slighter, more inconsequential effort.

While there’s nothing about the film that really stands out, there’s also nothing about it that really screams “amateur hour,” either, although the film’s look can often be rather nondescript and I found child actor Ariel Gade to be rather annoying for much of the film. Corrigan is predictably good, however, even if he’s a much more restrained presence than he usually is and Bostwick’s performance really grew on me, even though his initial scenes were way too broad and silly: by the film’s conclusion, Bostwick has become sort of a Matlock/Columbo hybrid and he’s kind of great: Eric Price, however, is a complete non-entity as the dumb-as-dishwater deputy. British actress Davis, so great in the UK version of The Office and Edgar Wright’s Shaun of the Dead (2004), practically steals the show as the nice girl who’s sweet on a very damaged guy, although Karen Black is disappointing in a role that hits the sour zone between loony and checked-out.

Ultimately, Some Guy Who Kills People is a good, but not great, effort. The film moves quickly and is never particularly painful to watch, although it often feels a bit hackneyed and overly familiar. Fans of Kevin Corrigan (seriously: who doesn’t think this guy is one of the most under-rated actors in the biz?) should find this fun, although it definitely ranks as one of his lesser efforts. Nonetheless, there’s enough good stuff here to make Some Guy…a pretty decent way to kill 90 minutes.