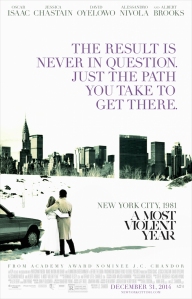 While most people will freely admit to having some sort of unalterable moral code, the reality is much less black and white: I’m willing to wager that we’ve all compromised our personal codes, from time to time…that’s just what life is about. Perhaps you’ve tolerated prejudicial beliefs from an otherwise beloved relative. Perhaps you’re an environmentalist who’s taken a soul-killing corporate job with a King Kong-sized carbon footprint in order to pay the bills. When faced with the choice between suffering for our “code” or bending our beliefs in order to achieve some measure of happiness, it’s tempting to say that we would all be able to stand firm in the face of adversity. It’s tempting, sure…but is it true?

Abel Morales (Oscar Isaac), one half of the married couple that stands at the exact center of writer/director J.C. Chandor’s A Most Violent Year (2014), is a man with one of those aforementioned “unalterable moral codes,” an individual who prides himself on always taking “the path that is most right.” Abel is a man with principles, with drive, ambition and an internal compass that always keeps him oriented towards true north…or, as it turns out, his own personal notion of true north. When his world begins to collapse around him, however, Abel will be forced into a rather unenviable position: greet his massing enemies with the violence and corruption that they’ve shown him or stick to his code and, quite possibly, become nothing more than a minor footnote in someone else’s story. As Pink Floyd so eloquently put it: “a walk-on part in the war or a lead role in a cage”…Abel can have either one but he can’t have both.

Kicking off in the Big Apple during the titular “violent year” (also known as 1981), Chandor’s newest opus concerns Abel and his wife, Anna (an absolutely ferocious Jessica Chastain), as they try to carve out their own piece of the American Dream. They own a heating oil company and have just started the process to acquire a prime piece of seafront real estate, all the better to bring in their own shipments directly and cut out the middle man. While Abel tries to pull together the $1.5 million that he’ll need for the deal, he also must deal with a raft of other problems including his mercenary competitors, a nearly non-stop barrage of violent fuel hijacking and an overly zealous district attorney (David Oyelowo) who’s been investigating the Morales’ company for several years.

After another series of thefts, including one where one of Abel’s drivers, Julian (Elyes Gabel), gets his jaw broken, the head of the teamsters (Peter Gerety) insists that all of Abel’s drivers be issued handguns: he refuses to put his men into any more unsafe situations, despite Abel’s protests that faked gun permits are only going to add to his legal woes. As this is going on, Abel surprises an intruder in his home, a shady individual who drops a gun as he flees. Anna, putting two and two together, realizes that the attempted invasion might not be part of the year’s “crime wave” but actually related to their current problems with the company. The message is clear: the Morales’ aren’t safe anywhere, including their own home.

As Abel watches his carefully constructed plan fall apart, piece by piece, he’s goaded by his loose-cannon wife to take more drastic, unsavory measures: she’s the daughter of a mobster, after all, and those guys always know how to take care of business. Abel has that aforementioned “personal code,” however, and he’s determined to do everything on the up-and-up, even if it means putting his family and business through the wringer. When Julian gets attacked again and takes matters into his own hands, however, it forces Abel to scramble and try to put all the pieces back together before his time runs out on the real estate deal. Will Abel stick to his code or will he give in to the violence around him and respond in kind? Will he become the monster that he fears in order to get the life that he deserves?

Extremely stylish, beautifully shot and as cold as an iceberg, A Most Violent Year packs plenty of punch but still manages to fall short (to this viewer, at least) of Chandor’s previous film, the “Redford on a boat” mini-epic, All is Lost (2013). There’s plenty to like and respect here, no doubt: Chandor is a sure-hand as both writer and director, displaying an admirable ability to cut the fat and get right to the meat of the situation. That being said, A Most Violent Year feels too long and bloated for the relatively simple story beats involved: the structure and pacing feel off, leaving too much “dead air” and sapping some of the film’s forward momentum.

One aspect of the film that manages to shoot for the moon and score brilliantly, however, is the extraordinary performances. Front to back, A Most Violent Year is loaded with so many memorable performances and masterfully acted scenes that he handily establishes itself as a real actors’ showcase. The supporting cast, alone, would make the film worth a watch under any other circumstances: Albert Brooks turns in another great, weary performance as Abel’s lawyer/confidant; Oyelowo is solid as a rock as the dogged D.A.; Gabel offers up some genuine anguish as the conflicted Julian (the parallels between his failure and Abel’s success are one of the film’s most subtle motifs) and Jerry Adler (perhaps best known for his recurring roles as Hesh in The Sopranos) brings a surprisingly gentle, paternal quality to his performance as the Orthodox Jewish owner of the property that Abel and Anna are trying to buy.

The real stars of the show, however, are undoubtedly Oscar Isaac and Jessica Chastain. For his part, Isaac downplays the character of Abel masterfully, allowing all of the anger, frustration and fear to bubble and boil just below the surface until it finally explodes skyward in a truly volcanic display. He’s a case study in restraint and chilly resolve and Isaac works wonders with nothing so much as a soft word and piercing glare.

Chastain, on the other hand, is a completely unrestrained force of nature, the raging hurricane that tosses the rest of the cast around like so much flying junk. To not put too fine a point on it, she’s absolutely astounding in the film: it’s impossible to look away whenever she’s onscreen. From the stunning showpiece where she blows away the wounded deer to the fist-raising moment where she tells Oyelowo’s D.A. just where he can shove it, Chastain’s Anna is, easily, one of the most memorable modern cinematic creations.

Less Kay Corleone than Ma Barker, Anna is the true power behind the throne and Chastain tears into the role with absolute gusto. The fact that she wasn’t nominated for an Oscar only goes to show how vapid that particular process is: the fact that her performance was considered a “supporting” role in other nominations only goes to show how flawed that rationale is. Quite plainly, Chastain is as much a part of A Most Violent Year as Isaac is…perhaps more so, to be honest.

Despite the top-shelf performances, gorgeous cinematography (Bradford Young also shot Selma (2014), giving him two prestige pictures in the same year), great score (despite not caring for Alex Ebert’s main gig in Edward Sharpe and the Magnetic Zeros, his score is absolutely perfect) and effective mise en scene, I still found myself slightly let down by the whole thing. Perhaps it speaks more to personal choice than any major flaws in the film (short of really trite ending to Julian’s arc, there aren’t many major missteps) but A Most Violent Year never quite struck me as “essential,” merely very well-made.

In truth, short of two chase scenes (one decent, the other a real showstopper), the whole film ends up being rather uneventful. Sure, Abel and Anna are faced with a seemingly insurmountable array of problems but each issue ends up being resolved a bit too casually to provide much tension. The resolution of the Julian storyline, the resolution of the fuel hijacking, the resolution of the property deal…in each case, it feels as if Abel and Anna are plucked from the stew-pot just as the water begins to get nice and hot. One of the things that really struck me about the chase scene between Abel and the hijackers is how unhinged and dangerous it felt: for that brief time period, I really found myself questioning the outcome. Were that overriding sense of danger more present throughout the film, perhaps it might have gripped me a little tighter.

Ultimately, A Most Violent Year is a film that deserves no small amount of praise: the performances, alone, are enough to make this a must-watch. That being said, it’s also a film that never quite sunk its claws into me, never quite demanded my complete adoration. Perhaps, in the end, A Most Violent Year is a perfect case of “different strokes for different folks”: extremely well-made and quite evocative, there’s nothing overtly wrong with the film, yet it never quit kicks like it’s supposed to.

That’s quite alright, however: I’ll keep looking forward to Chandor’s films just like I have ever since All is Lost proved him to be a modern master. In an age where “bigger, louder, dumber” seems to rule the box-office, we could always use more films like A Most Violent Year. Essential? Not quite. Worth your time? Without a shadow of a doubt.