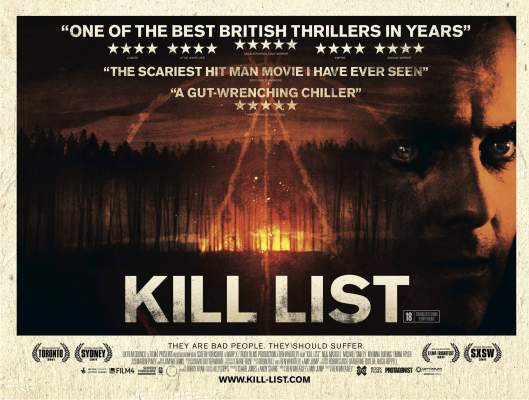 When one is standing at the bottom of a very deep hole, looking up at a tiny patch of daylight, it’s tempting to say that it can only get better from there: the only way is up, after all. This, of course, is a very comforting lie, the kind of fairy tale that helps us all sleep better at night. The plain and simple truth of the matter is that things can always get worse: regardless of far down you’ve already dug your hole, there’s always new depths to aspire to. As humans, the very bravest (and foolhardy) thing we can do is stare fate right in the face and dare it to blink. We’ll lose, every time, but that doesn’t stop us from trying.

Nowhere is this notion made more explicit than in British auteur Ben Wheatley’s sophomore film, Kill List (2011). When we first meet Jay (Neil Maskell), the poor bastard seems to have dug a hole as far into the earth as humanly possible. Out of work for eight months, after botching some sort of undisclosed job that appears to have left him with a potent case of PTSD, Jay’s doing everything he can to hold his life together, even if he’s doing a piss-poor job of it. Jay and his wife, Shel (MyAnna Buring), are at each others’ throats constantly, to the point where they routinely hurl bottles against walls and scream in each others’ faces until they’re out-of-breath. To make a bad situation even better, their young son, Sam (Harry Simpson), is a silent, aching witness to the whole massive shit show, wanting nothing more than some semblance of peace in his shattered home.

Things start to look up a bit, however, when Jay’s partner, Gal (Michael Smiley), shows up for a night of drinking, merriment and reminiscing. As the night progresses, complete with a number of potent meltdowns between the feuding spouses, Gal takes Michael aside and offers him an opportunity to “get back up on the horse” and bring a much-needed sense of financial security back to his domestic war-zone. Caught between a rock and an even sharper rock, Jay’s only too eager to get back to earning and takes Gal up on his offer.

Just what, exactly, did Jay and Gal do before whatever happened eight months prior? Well, as it turns out, they were hitmen, a revelation that Wheatley gets out of the way fairly quickly. Gal has just received a job offer that promises maximum money for minimum effort: all they have to do are exterminate three separate targets and they’ll get enough money to make any number of problems permanently disappear. After the pair meet with their strange “client” (a suitably sinister Struan Rodger), a meeting that ends with an impromptu blood oath, they set off on their fated path, uneasy but determined to get the job(s) done. It doesn’t take a psychic to know that this ends up being a very, very bad idea, the kind of bad idea that proves, once and for all, that life can always get worse. Much, much worse.

From his humble beginnings with the caustically comic “kitchen-sink-and-gangsters” flick Down Terrace (2009) all the way to his upcoming, much ballyhooed adaptation of J.G. Ballard’s High Rise (2016), writer-director Ben Wheatley has made a sort-of cottage industry out of the intersection between “polite” British society and the howling insanity of a world gone very, very wrong. By mashing character dramas up with more traditional (“traditional” being a relative term, here) genre films, Wheatley gives extra heft to his narratives, providing intricate insight into characters that, in lesser hands, might across as either vilely unredeemable or completely sociopathic. In Wheatley films, there are never traditional “heroes” or “villains,” nor is there, necessarily, a “right” or “wrong.” There just is, for better or worse…often, of course, for the worse.

Like all of Wheatley’s films, Kill List takes so many sudden turns and reveals so many surprises that to reveal much beyond a basic synopsis is to rob new viewers of a singularly unique experience. As far as plot and story goes, suffice to say that you will call some of the twists (or, at the very least, suspect them) but you will never call all of them, least of all the harrowing, soul-shattering climax. You may think that you know what Wheatley’s doing and, for a time, you might be right. Hell: even after seeing the film a half dozen times, I still find myself second-guessing earlier viewings and readjusting my understanding of the proceedings.

This, of course, is one of the hallmarks of any indispensable film: that ability to return, time and time again and discover new thrills with each subsequent viewing. There are plenty of exquisitely made films that have always been “one-and-dones” for me: it’s to Kill List’s great credit that, despite the film’s many unpleasantries, I keep returning to it, time after time. Chalk this up to the exceptional filmcraft, the airtight writing or the stellar performances (there, literally, isn’t a bad performance from the entire cast, whether in lead or walk-on parts) but Wheatley’s Kill List is the very definition of a modern classic.

Despite all of this, however, I find myself offering the same caveat that I do with many of my favorite films: Kill List, despite its overriding quality, is not a film for everyone. This is a film that delves into the very heart of darkness that so many genre and horror films only hint at, a film that derives its hideous power not from a collection of gory onscreen effects (although there’s plenty of those) but from the deeper horror of shattered humanity. The finale is impossibly, almost oppressively horrifying, make no bones about it, but it’s also deeply and fundamentally sad and hopeless, the kind of revelation that sucks the wind out of your sails, leaving you defeated and broken.

Kill List is many things: a tale of friendship and duty; a heartbreaking look into the dissolution of a marriage; an examination of the destructive power of anger and the redemptive nature of martyrdom; a mystery; a grotesque; a cautionary tale. Kill List is all of these things and so many more. Above and beyond all else, however, Wheatley’s Kill List is a dark, savage, merciless abyss: stare into it, by all means, but don’t be surprised if you find that the abyss also stares back at you.