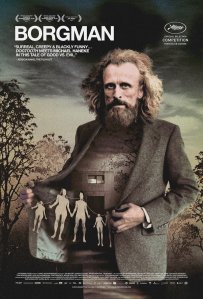 What, exactly, would you get if you crossbred Pier Paolo Pasolini’s Teorema (1968) (or its American remake, Down and Out in Beverly Hills (1986), if you prefer) with Michael Haneke’s nihilistic Funny Games (1997) and then had oddball Greek auteur Yorgos Lanthimos direct the results while the ghost of Luis Bunuel shouted advise from the sidelines while playing sand volleyball with Lars von Trier? You would probably, of course, end up with a big, stinking, pretentious pile of pap: after all, that’s a whole lot of disparate arthouse balls to juggle at one time and we all know what happens to soup when the kitchen is full of cooks. If you’re one-of-a-kind Dutch master Alex van Warmerdam, however, you would take all of these ingredients and turn them into of the single most mind-blowing, difficult and flat-out amazing films to come down the pike since…well, probably since Warmerdam’s outsider classic The Northerners (1992) blew minds over two decades ago. But remember, kids: this guy’s a professional…do not attempt this at home.

Any attempt to give a plot synopsis for Borgman (2013) is pretty much doomed to fail miserably but we’ll give it the ol’ college try, nonetheless. Camiel Borgman (Jan Bijvoet), a mysterious transient of some sort, is roused from his underground forest lair by an armed posse (think pitchfork wielding villagers in Frankenstein films and you’re on the right track): narrowly escaping with his life, Camiel alerts the other forest dwellers and heads for the “safety” of a nearby upper-class suburb. After attempting to gain entry at various houses (he just wants to take a bath but, for some reason, folks seem rather hesitant to allow a mysterious, bearded vagrant into their homes for the express purpose of bathing…what happened to love your fellow-man?), he finally ends up at the Schendel residence. Life, as they say, will never be the same again.

Outwardly, the Schendels are the picture of modern success: husband/father Richard (Jeroen Perceval) brings home the bacon quite ably, even if he spends long hours at the office to do so; mother/wife Marina (Hadewych Minis) spends her time painting and working on her art and their three, young children, Isolde (Elve Lijbaart), Leo (Pieter-Bas de Waard) and Rebecca (Dirkje van der Pijl) are tended to by their au pair, Stine (Sara Hjort Ditlevsen). The Schendels live in a luxurious home, including a nearby “summer-house” that’s probably as nice as some folks’ “real” houses and seem to be the very picture of detached affluence.

This nice little facade of normalcy comes crashing to the ground, however, when Camiel ends up pushing himself into their lives. After provoking Richard to kick the ever-loving shit out of him, Camiel then appeals to Marina’s sympathy and she ends up hiding him in the summer-house, unbeknownst to her overly irritable husband. Despite her request that he stay put, Camiel freely wanders about the estate, slinking around the margins as Richard goes about his business, blissfully unaware. At first, Camiel’s motives seem inscrutable but largely harmless: he enjoys hanging out with the children and telling them stories and seems largely content to simply observe the family’s day-to-day activities from the shadows.

In short order, however, Camiel’s actions begin to seem decidedly stranger and more nefarious, not least of which when he cleans up his appearance and applies to be the Schendel’s new gardener after he bumps off the old one. Once he’s “officially” insinuated within the household, Camiel calls up the other “forest dwellers,” namely Pascal (Tom Dewispelaere), Ludwig (director Warmerdam, in a fantastic performance), Brenda (Annet Malherbe) and Ilonka (Eva van de Wijdeven), and seems to put some sort of grand plan into action.

With Pascal and Ludwig now working with Camiel as gardeners and Brenda and Ilonka functioning as a tandem hit-squad/cleaning crew, Camiel begins to insinuate himself more and more into the family. As he seduces the (very) unhappily married Marina, the others seem to be working their own games on the children and nanny, although the ultimate goal remains unclear. As Camiel and his crew finish up their grand, mysterious re-design of the Schendel’s garden and Richard grows more and more irrational and violent, Marina begins to be plagued by terrible nightmares, visions which seem to be seeping into her waking life. With the line between fantasy and reality growing ever blurrier, Camiel works towards an end-game that will either spell the complete destruction of the Schendels and everything they stand for…or their ultimate salvation.

For the most part, the less said about Borgman’s specifics, the better: part of the unstoppable joy of watching the film is experiencing the numerous ways in which writer-director Warmerdam constantly fucks with audience expectations. Suffice to say that the film does appear to follow some form of logic, albeit one that seems particularly alien to poor fools like us. There’s certainly a strong element of fantasy here, what with that exceptionally odd opening, the appearance of the dogs and the undeniably strange resolution, but the entire film is grounded in a kind of muddy realism that makes the more surreal elements stand out in even greater relief. In particular, I’m reminded of the way in which Haneke blended fantasy and realism in Funny Games: while the majority of the film can be read as a simple home-invasion scenario, the moment where one of the tormentors “rewinds” the action in order to get a different outcome is a distinctly fantasy element. Borgman is full of little moments like this, small details that cue us in to the notion that more is going on under the surface then we might at first notice.

Warmerdam has a particular way of staging certain events (such as the various scenes where the naked Borgman sits atop Richard and Marina while they sleep) that makes us question what we’re seeing: once Camiel is officially living with the Schendels, it’s almost impossible to fully separate fantasy from reality, especially since what occurs in the more overtly fantasy moments seems to directly affect things during the “realistic” portions. Lots of films are described as “dizzying” and “head-swirling” but Borgman is one of the very few films that earns those descriptors part-and-parcel.

One of the most intriguing aspects of Borgman is the film’s coal-black, dry-as-bone sense of humor. While very little in the film could actually be considered “funny,” per se, there’s still an undeniably comic thread that runs underneath everything. In particular, the ways in which Camiel and his gang react, largely unemotionally, to the increasingly passionate activities of Richard, Marina and Stine leads to some truly choice moments (the scene where Pascal blows off Stine’s advances and then goes to sleep while she’s standing there is a minor classic).

While some audience members may find themselves scratching their heads over Borgman’s denser, more outre elements, I’m sure that everyone can agree that the film looks absolutely stunning: from beginning to end, cinematographer Tom Erisman gives the film a rich, darkly fairy-tale-like sheen that compliments the strange doings to a tee. Similar to Lars von Trier’s exceptional Melancholia (2011), Borgman features some simply stunning visuals: one of my very favorite shots in decades has to be the gorgeous underwater ones that detail the outcome of the gang’s various “victims.” Borgman is the kind of film where you could turn the sound off and just admire the visuals: it’s easily as beautiful as one of Peter Greenaway’s epics or my personal go-to for this sort of thing, Gyorgy Palfi’s stunning Taxidermia (2006).

Whenever you’re dealing with hard-core surrealism, the acting can become a make or break element: as with everything else, Borgman has this locked down solid. Simply put, the cast is perfect, each actor bringing something unique and individual to the table. It’s tempting to single out Bijvoet here, since his performance as the titular Borgman is one of the most accomplished, impressive performances I saw all year. The truth is, however, he’s surrounded by great performances: Minis is stunning as the open-wound that is Marina, Perceval turns Richard from one-dimensional ape into something approaching a tragic figure, van de Wijdeven and Malherbe are superb as the most philosophical hitmen since Vincent and Jules and Ditlevsen is so bizarre as the au pair that she comes across as truly alien…there isn’t a single boring, “run of the mill” character to be found here, not one moment of lazy acting, nothing that takes us out of any of the characters. Surrealism like this is no mean feat to pull off but Warmerdam and his cast make it look elementary.

I’ve already established that Borgman looks amazing, is endlessly fascinating, brilliantly written and genuinely creepy…but what is it actually about? To be honest, that’s a pretty great question. I’m not too proud to admit that I was often completely lost during the film’s relatively short run-time (it’s under two hours but feels closer to 90 minutes), although that fact never bothered or frustrated me. In fact, this was one of the very few films I’ve seen recently that actually made me research it after it was over. Although I’m still not quite sure that I understand what Warmerdam is getting at, I’m pretty sure I’m in the right general area. The film can be read in at least a dozen different ways (I absolutely wasn’t joking about the parallels to Down and Out in Beverly Hills) but I think that Warmerdam feeds us clues throughout that helps point to a distinctly fantasy-oriented explanation: note the similarities between Camiel’s night-time visits to the Schendel bedroom and Johann Heinrich Fussli’s iconic painting “Nachtmahr” to see where I eventually ended up.

Ultimately, however, I really don’t care what Warmerdam’s end-game was: the resulting film is so damn cool that I’m perfectly happy to continue to imperfectly understand it until…well, until I finally figure it out, I suppose. As far as I’m concerned, a good film is like a puzzle but a great film is like one of those mammoth 10,000 piece jigsaw puzzles that seem to be mostly generic blue sky pieces. I’m not saying that you should work up a cranial sweat every time you sit down to watch a flick…there’s nothing wrong with flipping your internal switch to “idle” every once in a while. A truly great film, however, requires complete investment on behalf of the audience: if the filmmaker is trying to tackle something important, the least you can do is keep up. As far as I’m concerned, Borgman is one of the most undeniably great films of the year, a complex, confusing masterpiece that demands your complete attention, makes no concessions and has an absolute blast doing it. I may not have completely understood it but I absolutely loved it and can’t recommend it highly enough.