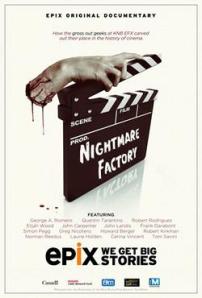 When one is discussing the most influential special effects/make-up/visual effects artists in the business, there are a few names that always seem to come up: Tom Savini…Rick Baker…Stan Winston…Ray Harryhausen (RIP). Look closely, however, and you’ll notice another trio of names that seem to pop up in every other end credit scroll for the past several decades: Greg Nicotero, Howard Berger and Bob Kurtzman. Although they have plenty of individual credits to their name, the three would go on to form KNB Effects, one of the most influential and omnipresent effects studios to emerge since Lucas’ groundbreaking Industrial Light and Magic. Donna Davies’ fun and informative documentary, Nightmare Factory, takes an up-close-and-personal look at KNB Effects, with particular emphasis on co-founder Greg Nicotero, sfx godfather Tom Savini’s protegé.

Kicking off with a “greatest-hits” highlight reel that amounts to a fan-pleasing gore clip show (complete with pounding metal soundtrack), Nightmare Factory makes one thing abundantly clear: this one is aimed right at the genre fans who geek out on fantastic monsters, severed limbs, spurting blood, explosions and puppetry. We go through the history of KNB, which begins with the history of its key players: Greg Nicotero, Howard Berger and Bob Kurtzman. While we don’t get a whole lot of Kurtzman, who left the company a decade into its existence, we do get a whole lot of Nicotero and quite a bit of Berger. Luckily, Nicotero is an absolutely fascinating person, a life-long film and genre fan who’s devoted his entire life to making the impossible real. Long before KNB Effects was a twinkle in anyone’s eye, Nicotero and his younger brother, Bryan, were making their own movies, perfecting stunts, devising effects and props and, in general, being pretty amazing. A chance encounter with George Romero (during a family vacation in Rome, no less) led the 16-year-old Greg to a tour of Romero’s Dawn of the Dead (1978) shopping mall set and an offer to work on his next film, Day of the Dead (1985). This, in turn, led to Nicotero meeting effects god Tom Savini and the rest, as they say, is history.

After meeting and becoming friends on the set of Day of the Dead, Nicotero and Berger ended up moving in with a friend of Berger’s named Robert Kurtzman. The three became fast friends on the set of Sam Raimi’s Evil Dead 2 (1987) which led to the realization that they might be able to make something bigger of this. KNB Effects was born and, within short order, became a powerhouse in the world of movie special effects, particularly in the effects-heavy era of the late-’80s and early-’90s. KNB Effects reach was so widespread, in fact, that it extended to decidedly non-genre offerings like Gross Anatomy (1989) and Oscar-winner Dances with Wolves (1990). In fact, you’d be pretty hard-pressed to find a film with any kind of practical effect within the past 30 years that didn’t bear the mark of either KNB Effects, Nicotero, Berger or Kurtzman: the guys were just that ubiquitous in the industry! Some of the best parts of the film involve the footage of KNB Effects heyday in the late ’80s, where the studio had a wild, rock ‘n roll, party-hard attitude: most of the effects artists were also in rock bands, hung out together constantly, partied the night away and made monsters during the daytime. For a guy like me, this looked like pretty much the best place to work in the entire world. Fuck crazy Wall Street firms: the shenanigans at KNB looked like a whole lot more fun!

Although KNB Effects is just about as important as effect studios get (they even created the “blood-button” effect that has allowed generations of indie filmmakers to create gunshots on the cheap), the times are always changing and we feel the effects of this within the doc. Studios now want effects as quickly and cheaply as possible: there’s no longer time to lovingly craft effects in the same way that the artisans did twenty years before. While computer-generated imagery is a valuable tool when used hand-in-hand with practical effects, the tendency these days is to heavily rely on CGI, which can be much quicker and cheaper to utilize than practical effects but tends to have a disarmingly glossy hyper-reality that is no patch on the oftentimes rougher practical effects of bygone eras. It’s certainly a devil’s dilemma: filmmakers are always in a desperate need to save money, which makes CGI the only feasible reality for many low-budget productions, yet cheap CGI makes any film look bad, regardless of the general quality of the production.

There’s also the sad revelation, late in the film, that Nicotero doesn’t really think anyone will come around to replace them: no one has a burning desire to just make monsters these days, he says, at least not like in the days of Famous Monsters of Film Land, Ray Harryhausen and Tom Savini (at 68, Savini is now the elder statesman who used to be the infant terrible…he even has his own special effects training school). We do get to see a few members of the younger generation who were influenced by the ’70s-’80s pioneers, such as Edgar Wright, Simon Pegg and Robert Rodriguez, although we don’t really get to meet any of the new generation to whom Nicotero and the others will be passing their torch.

While Nicotero certainly has a history and perspective on the situation that I’ll never possess, I can’t help but feel that he’s dead wrong in that aspect: there will always be kids around who want to make monsters. As long as there are geeky outsiders who spend their childhoods reading monster magazines under the blankets, there will be special effects people. As long as there are kids who create backyard zombie epics featuring the contents of their fridge and an ocean of passion, there will be special effects people. We may very well come to a time when practical effects are no longer utilized in mainstream cinema, where CGI has become the all-encompassing cinematic creative force and where model-makers are as quaint as town criers. Hell, we may already be there. As long as there are still kids who grow up with the burning desire to make the magic themselves, however, to mold the clay and set the fuses and paint the models, to bring life to dead objects in the same way that Dr. Frankenstein once did…as long as these kids are still around, there will always be someone to carry on the flag. Nightmare Factory serves as a wonderful reminder of just what an important tradition this really is and a truly loving salute to those who continue to keep the tradition alive.