Taking a break from the barrage of Oscar-related films that I watched at the end of February, I decided to go in a completely different direction with the rather modest John Wayne oater Hondo. This was never one of my favorites as a kid but would time change my perspective? Read on, gentle folk…read on. 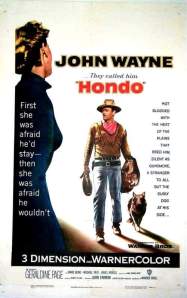 If there was one thing that both my parents loved when I was growing up, it was definitely Westerns. We were a very film-centric family, watching dozens of movies over the course of a typical week but Westerns always made up a good portion of the fare. To be honest, I was never a huge fan of Westerns when I was younger, although I was completely obsessed with Clint Eastwood and spaghetti Westerns, by association. I was able to find Westerns that I liked, here and there, and even one that I abjectly adored (El Dorado, still one of my top 5 favorite film ever) but I found the genre rather dull, as a whole, and found little to hold my interest. In particular, I was always less than impressed with John Wayne (aside from his outstanding turn in El Dorado, of course). He was one of my parents’ favorite actors, so I’d probably seen all of his films (at least twice) by the time I was a teenager. Despite that, there were very few that I actually remembered (who could ever forget The Green Berets…), making all of these films ripe for re-examination. After all, if I can’t recall anything about the film, it’s almost like watching it anew, right? In this spirit, I decided to give Hondo another shot and see how adult-me felt about it.

Based on a Louis L’Amour story (one of my mother’s favorite authors) and directed by filmmaking machine John Farrow (48 films in 25 years), Hondo is a modest, unassuming and fairly routine little Western. Wayne plays Hondo Lane, the kind of laconic, sharp-shooting gunfighter hero that L’Amour specialized in. He stops by the ranch of Angie Lowe (Geraldine Page) and her young son Johnny (Lee Aker), a ranch which just happens to be located in hostile Apache territory. Angie says that her husband is away but Hondo is more than welcome to stay for a spell. Sensing something more to the story, owing to the general state of disrepair around the ranch (things are obviously going to shit since the man isn’t around, doncha know) and concerned about the nearby Apache, Hondo agrees to stay on and serves as a surrogate father, of sorts, for precocious Johnny. Hondo is also part-Indian, which makes his relation to the white settlers and the surrounding Apache even more complex.

Trouble enters the picture, however, in the form of Vittorio (Michael Pate), the local Apache chief. When his raiding party comes to Angie’s ranch, Johnny ends up holding them off with a few poorly aimed gunshots, earning the undying respect of the chief and blood-brother status. Since no “blood-brother-son” of Vittorio’s is going to grow up fatherless, Vittorio tells Angie to either produce her absentee husband (even the Apaches think he’s imaginary) or choose a nice, strong Apache warrior to replace him. Producing her husband Ed (Leo Gordon) becomes rather complicated after Hondo ends up gunning down the yellow-bellied lout (he tried to shoot John Wayne in the back, so what, exactly, did he expect to happen?), so Angie replaces him with the next best thing: Hondo. Thrown into the mix, Hondo must now negotiate between the angry Apache, the blood-thirsty U.S. cavalry, a boy who needs a father and a lovely, lonely lady who could really use a fella. Too much to handle? All in a day’s work for John Wayne, son…all in a day’s work.

Overall, Hondo is a decent but largely unexceptional Western that doesn’t do much to distinguish itself from the rest of Wayne’s oeuvre.   The original story’s central conceit, that Hondo is a “half-breed” caught between the world of the whites and Native Americans is fairly underutilized here, producing no more than a few throwaway moments and adding nothing particularly deep to the story. In its absence, we’re left with a fairly routine Western about a rugged cowboy protecting a widow and her kid from outside forces. Certainly nothing wrong with that, but nothing particularly ground-breaking, either.

Wayne is good in the role, as expected, although there’s absolutely nothing save for the occasional attempt at Native American-sounding philosophizing to differentiate this from many of his other roles. If anything, Wayne’s character is still the same old red-blooded, Injun-killin’ character he always played: now, he just pays lip service to a “vanishing way of life,” which seems particularly disingenuous since he’s helping to make it vanish in the first place. His ending statement, after the obligatory big gunfight between the Apaches and cavalry, is to say “End of a way of life. Too bad…it’s a good way of life.” Indeed. The film seems to want to have its cake and eat it, too: the only “good” Indian is still a dead one but at least their killers feel kinda bad about it. It’s an interesting, conflicted notion to have the Apaches serve as both the good AND bad guys: the cavalry does nothing noble whatsoever (they also aren’t particularly good tacticians or listeners), whereas Vittorio and the Apaches are shown to be true men of their word. They still get gunned down, mind you, but at least they never lie about anything.

At the end of the day, Hondo stands as a decent but largely unexceptional Western, one that probably won’t have much value beyond Wayne completists.  The filmmaking is decent, the acting is fine and film clips along at a brisk pace. Nonetheless, while adult-me has a softer perspective, he’s still pretty much in agreement with young-me:  Hondo just isn’t much to write home about.