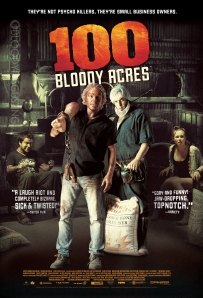 Australia’s had a rich and vibrant horror/exploitation film industry since the 1970’s (if you’ve never seen a classic Ozploitation flick, you’re missing out on something quite beautifully insane), so it’s not surprising that they’ve continued this into our horror-happy present day. Over the past decade or so, however, Aussie horror films have been getting steadily more brutal, with Greg McLean’s Wolf Creek (2005) serving as somewhat of a standard-bearer. The sparse, unrelentingly grim and shockingly graphic film about an Outback psychopath who values human life as much as animal life (which is to say, not at all) has sparked a mini-wave of similar films in its wake, including Dying Breed (2008), The Horseman (2008), The Loved Ones (2009), Road Kill (2010) and McLean’s own Wolf Creek 2 (2013). This newest entry in an apparent attempt by Australian genre filmmakers to scare away tourists is the horror-comedy 100 Bloody Acres (2012), which often comes across as a kinder and gentler, if no less gore-drenched, take on McLean’s influential shocker.

Reg (Damon Harriman) and Lindsay Morgan (Angus Sampson) are not only brothers but local celebrities, of a sort, in their tiny, backwater Australian town. The two own a local “organic fertilizer” company and are so successful that they even have their own radio ad, a catchy jingle that seems to play about every five minutes (the station was probably happy for the revenue). Lindsay is the older of the two, the defacto leader and, vaguely threatening in a beefy, Amish way. Reg is kind of sweet and slow-witted, an idealistic dreamer who still sings along to their ad whenever it comes on the radio. For all intents and purposes, the Morgans are happy, thriving small business owners. Only, they aren’t.

You see, the Morgan’s fertilizer company is behind on shipping out its famed fertilizer and their customers are starting to grow impatient. Reg won’t let a bad product go out, however (they have a reputation, after all), and he’s been doing everything he can to round up the secret ingredient that makes it so special. Turns out, this secret ingredient is roadkill: more specifically, the human kind. Reg has a pretty good system (get to the accident first, scoop the bodies into his truck) that seems to work fairly well, bar the various questions that must arise when 100% of local accident victims vanish into thin air…but I digress. We’ve just seen Reg scoop up his latest find when he ends up with slightly more lively passengers: Sophie (Anna McGahan), James (Oliver Ackland) and Wes (Jamie Kristian). Their car has broken down en route to a music festival (where James intends to propose to Sophie, during John Butler’s set, not aware that best friend Wes is slipping her the salami with alarming frequency) and Sophie sweet talks a ride from the ever-skittish Reg. She rides up front, the fellas get to ride in back, with the fertilizer and hidden bodies, and they’re off to the races. When the inevitable happens in the back, Reg must take steps to prevent his and Lindsay’s illicit business practices from seeing daylight. Time to visit the factory.

Once Lindsay gets involved, the shit really hits the fan. With zero tolerance for screw-ups and a propensity for coldbloodedness that rivals Anton Chigurh, Lindsay is a true force of nature. Seeing a golden opportunity, Lindsay decides to waste not, want not with their new captives: after all, if dead bodies were well, fresh ones should work even better. The only fly in Lindsay’s ointment is an annoying tendency for the captives to escape (especially the perpetually stoned Wes) and the fact that Reg has started to fall in love with Sophie. Before long, there’s a randy local looking to knock boots with Lindsay, a dog is running around with a disembodied hand in its mouth, James is realizing that Sophie hates John Butler and the grinder is screaming into bloody life. As the Morgans are finding out, owning your own business definitely means sweating blood…and then some.

Despite its often grim subject matter, there’s a certain light-hearted feel to first time writer/directors Cameron and Colin Cairnes’ debut feature that’s quite refreshing. While I’m a huge fan of Australian cinema, in general, I’ve really enjoyed the horror renaissance of the past decade. That being said, I’ve often felt that more recent films, such as Wolf Creek and The Loved Ones, had a tendency to be so unrelentingly bleak and torturous that they functioned more as endurance tests than things to be enjoyed. 100 Bloody Acres is, first and foremost, a horror-comedy, as opposed to a slightly sardonic horror film: it’s a subtle but big difference. Whereas Wolf Creek had a tendency to brandish each bloody incident as a weapon, using the set-piece approach to horror films, 100 Bloody Acres tends to use its goriest bits as jokes, similar to how gross-out comedies like There’s Something About Mary (1998) use material that would be shocking, in a serious context, but becomes comedic when blown into absurdity. While there’s certainly nothing funny about watching a guy get part of his hand chopped off, there is something pretty amusing about watching that guy spend the rest of the film politely inquiring as to the whereabouts of said hand (remember the dog from earlier? Yep.). There’s almost endless potential inherent with Lindsay’s growing frustration with not only his idiot brother but the world in general and the Cairnes’ have managed to wring quite a bit out of the film.

With a sharp script, it falls to the cast to deliver the goods and they acquit themselves pretty nicely. Angus Sampson, who plays Tucker in the Insidious films, is the clear standout in the cast and is actually worth the price of admission all on his own. Lindsay is a fascinatingly complex character: his bursts of anger are matched with depths of serenity and calm that approach zen levels and the scenes where he manages to draw on both reserves, such as the one where he begins by congratulating Reg and ends by choking him in a headlock, are the best in the film. If Damon Harriman isn’t quite as good as Sampson, it might have more to do with a character that often seems a bit conflicted and confused: it’s a great moment when Reg finally composes himself and decides to stand up to his brother but it also doesn’t really feel earned. The three hitchhikers tend to fairly obnoxious, although Jamie Kristian has some fun with his character’s stonier moments, including a great goof where an attempt to kick a knife across the floor ends with the knife embedded in his leg. Oliver Ackland, by contrast, is a constantly whining drip, although the film does get some mileage from a running gag where his mouth is ducktaped shot and we only hear nonsense, whereas Sophie responds as if hearing an actual conversation: it’s a credit bit and Ackland’s unusually expressive face sells it. McGahan, for her part, is a rather odd presence: her character seems to be an attempt to graft a “pixie girl” onto a “final girl” and the end results don’t work. She’s usually stuck playing cloyingly cute but her (too few) moments of resolve work a bit better.

Ultimately, despite all of the positives, 100 Bloody Acres didn’t make as much of an impact on me as I’d hoped. While there are some delightfully gonzo moments, the film is usually so low-key that it seems to stall out. The script is always sharp but I didn’t always like where it was going and the final resolution seemed more than a little contrived, unlike a similar resolution for something like Tucker and Dale vs Evil (2010), for example. It also seems a little strange to complain about an overabundance of gore in a horror film (especially a 2000’s-era Aussie horror film) but 100 Bloody Acres really takes the cake. It’s not spoiling anything to say that the grinding machine gets quite a workout in the film and the results are never pretty: if just thinking about the ramifications of this turns your stomach, 100 Bloody Acres is definitely not your film. The biggest issue with the gore tends to be the film’s overly conflicted tone: it begins as a horror-comedy, which balances out the excess violence quite well. When the film becomes unexpectedly serious, however, it tends to get dragged down into some pretty grimy places before being sent back into zany comedy land. Tucker and Dale, by contrast, maintained consistent levels of both grue and laughs: with 100 Bloody Acres, you’re really not sure where the needle will stop spinning.

If you’re a fan of Aussie horror films, feuding brothers and “special fertilizer,” 100 Bloody Acres may just be your ticket. If you’re just jumping on the Australian horror train, however, you might want to get on at another stop: this one might be for the fans only.