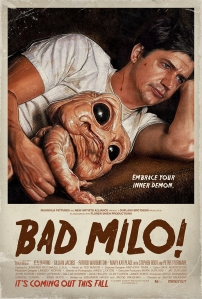 There are some film concepts that just sell themselves easier than others. Tell people that The Godfather is about mobsters and at least a few folks will be interested. Tell folks that The Texas Chain Saw Massacre is about cannibals and, dollars to doughnuts, someone’s gonna take the bait. It’s not necessarily that the world is full of mobster and cannibal lovers (although the continued success of these types of films says otherwise) but these are concepts that are fairly easy to wrap our collective heads around. Despite the actual content of these individual films, when we hear the words “mobster,” “cannibal” or “zombie,” we have a pretty good idea of what’s in store.

Once things become significantly higher (or lower) concept, however, preconceived notions become a bit more difficult to manage. If I were to tell you that The Dark Backward is about a stand-up comedian who grows a third arm out of his back, what would you say? Or that Septic Man is about a man who becomes a monster after falling into a sewer system? How about The Visitor, which can best be described as a low-budget sci-fi Western with angels, eagles, super children and John Huston? Sometimes, the basic idea behind a film can tell us almost nothing about the film, least of all whether we will actually like it or not. As Exhibit A in this notion, I present the recent horror-comedy Bad Milo, which bears a pretty simple premise: a nice, normal, average guy has a cute and cuddly demon that crawls out of his ass whenever he gets stressed and proceeds to massacre the (various) sources of said stress. At first blush, Bad Milo seems to be squarely in the Troma camp of over-the-top gore and gross bodily functions. Pass this one by, however, and you’ll be missing one of the sweetest, most unassuming and funniest films yet made about impending parenthood, absentee fathers and irritable bowel syndrome.

In short order, we’re introduced to our hero, Duncan (Ken Merino), one of those modern-day schlubs that Steve Carell specializes in. He’s got a shitty, passive-aggressive boss named Phil (Patrick Warburton), a baby-obsessed wife named Sarah and a constant yearning to know the father who abandoned him and his mother (Mary Kay Place) when Duncan was just a tot. Duncan, as with most modern folks, has got a lot on his plate, although his specific problems are all best suited to a broad big-screen comedy: his mother and her boyfriend Bobbi (Kumail Nanjiani) are perpetually horny, his fertility doctor (Toby Huss) is a crass jerk, his psychiatrist (Peter Stormare) is a loony and his new office is a bathroom, complete with urinal (one of the film’s numerous high points is the moment where Duncan’s imbecilic office-mate stares in wonder at their new “digs” and hopes that the urinal still works). With all of this going on, it’s no surprise that Duncan has quite a few health issues, not the least of which is his near crippling stomach ailments. For lack of a better (or more elegant) descriptor, Duncan has a particularly terrible form of IBS, leading him to spend hours in the bathroom and driving a bit of a wedge between him and Sarah: it’s a little hard to get romantic, after all, when your significant other is always on the can.

Duncan’s life becomes even more complicated, however, when his idiotic cubicle-mate Allistair accidentally deletes months of his work. Duncan experiences the worst pains of his life, blacks out and reawakens to the knowledge that Allistair has been shredded by a “raccoon.” Were it that simple, however. After a hypnotherapy session with his shrink Highsmith goes awry, Duncan is unceremoniously introduced to Milo, the demon who happens to live in his bowels. Milo is a cute little cuss, looking akin to a Muppet crossbred with one of the Ghoulies, and he takes a shine to his “father” Duncan. Only problem, of course, is that Milo has a tendency to “emerge” whenever Duncan is stressed…which is, apparently, all of the time. As Highsmith tries to help Duncan control Milo, other forces begin to emerge that will test Duncan’s new-found sense of zen: his boss has been draining the company dry, Sarah is still looking for a baby and Duncan’s long-gone father, Roger (Stephen Root), is reluctantly back in his life, with a secret of his own and a big piece to the puzzle that is Duncan’s life. Will Duncan be able to tame Milo? Can he forgive his father? Should he? How slimy will his boss get? And, most importantly, will he ever settle down and accept fatherhood?

Although Bad Milo’s concept is entirely predicated around bathroom humor and violence, the film is actually much sweeter and more wistful than this would imply. For one thing, Ken Merino is such a completely lovable puppy dog that you’re inclined to follow him anywhere, regardless of the absurd or disturbing situations: he’s an incredibly gifted comedian whose work in the TV shows Reaper, Party Down and Burning Love are practically  master-classes in making a doofus lovable. Bad Milo is completely and totally Merino’s film and wouldn’t be half as successful (or good) without his contributions. This isn’t to denigrate the quite capable supporting cast, however, which features a veritable who’s-who of character actors. We get Mary Kay Place, Patrick Warburton (always a favorite), Kumail Nanjiani (his infuriatingly condescending manner of speech is perfect for the character of Bobbi), Peter Stormare (as weirdly intense as ever) and Stephen Root. Root, in particular, is great in what amounts to yet another notch on a mighty impressive belt full of roles. Although he’ll always be Milton, Root’s resume looks particularly impressive by anyone’s standards.

Bad Milo focuses on several pretty deep issues, not the least of which are the abandonment issues that can fester late in life and affect one’s chances of raising a family. Without being fully aware, Duncan has been gravely damaged by his father’s absence and is taking these invisible wounds with him into his own developing family situation. He’s got a lot of love to give but it isn’t until he’s forced to serve as “father” to Milo that he’s able to focus this love unto anything besides his wife. He is his father’s son, after all, and there’s always the omnipresent fear that the apple doesn’t fall far from the tree. Manifesting these feelings of guilt, anger and disappointment as a physical entity may not be unique to this film (the nutso ’70s-era oddity The Manitou got there first) but Bad Milo manages the nifty hat-trick of being both thrilling and sentimental.

In reality, Bad Milo is the furthest thing possible from a Troma film, although there are various elements/scenes that would fit in nicely in any of Uncle Lloyd’s old “classics.” The gore effects aren’t particularly gratuitous but they are plenty juicy and do we get more than the recommended daily allowance of Milo returning to whence he came (if you get my drift). That being said, I’m really not sure what one could expect out of a film that could easily (if reductively) be described as “a man must learn to live with his ass demon.” Above all, Bad Milo is surprisingly and genuinely sweet. Duncan and Sarah have a quite lovely relationship, ass demons and parenthood issues notwithstanding. Duncan’s mom seems to genuinely love him and his friendship with his shrink, while hard-earned, becomes quite genuine by the film’s end. The reconciliation with his absentee father is also quite nice, helped in no small amount by an understated Root performance that reminds of Bruce Dern’s work in Nebraska.

As a comedy, Bad Milo also ends up being genuinely amusing. In particular, Warburton is perfect as Phil, the biggest dickhead to ever graduate management school. His constant degradation of Duncan approaches the level of sociopathic (the bathroom office is so perfect that I almost stopped the film after that point: why risk ruining it?) and good ol’ Patty is just the jerk for the job. In a similar vein, Toby Huss is quite good as Dr. Yeager, a “professional” whose bedside manner consists of telling Duncan that he has “a trooper in his pooper.” In order to make the central concept work, we’ve really gotta feel Duncan growing frustration and Warburton and Huss help make this happen.

Ultimately, Bad Milo is about something that we can all relate to, regardless of the relative health of our bowels or our personal lives: it’s about the need to be heard in a world where your voice is increasingly marginalized. At every possible opportunity, Duncan is over-ridden, over-shouted, over-turned and ignored. When he finally manages to find his voice, it doesn’t necessarily take the most productive form (ass demons rarely are) but it’s a voice, nonetheless. By refusing to be ignored and stomped on, Duncan gives the rest of us poor morons some sense of hope, no matter how faint. As the film makes explicitly clear, it’s always better to let things out than to keep them inside. We all have our own Milos: some good, some bad and some indifferent. Embrace yours today.