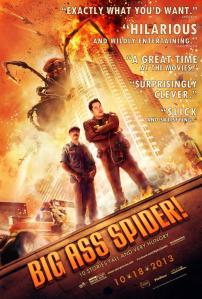 As a tinkling, piano-led cover of the Pixies iconic “Where Is My Mind?” plays on the soundtrack, we watch as Alex (Greg Grunberg), clad in exterminator’s overalls, strides in slow motion through absolute chaos: soldiers fire at something behind him, people run away screaming and buildings collapse into rubble everywhere. And then, we see it: a massive spider, as big as a house, sits atop a skyscraper like an arachnid King Kong. It strikes a helicopter out of the air with one giant foreleg, sending it flaming to the ground as the screen cuts to black. Text comes up on the screen: 12 hours earlier.

This is the first three minutes of Mike Mendez’s Big Ass Spider! (2013) and let me assure you: it is three absolutely glorious, nearly perfect minutes. If the rest of the film fails to completely live up to that decidedly high bar, well, that’s one of the prices paid for ambition. From the title on down, there’s nothing about BAS! that necessarily screams “must-see”: if anything, the film seems like it would be nothing more than a SyFy-esque romp with serviceable effects, some stupid laughs and lots of cheese. Quite the contrary, however, Mendez’s film has plenty of heart and is non-stop fun: it’s the furthest thing from perfect but it’s also utterly charming and, in the end, that’s always going to win me over.

Our hero, Alex, is a pest exterminator who’s ended up in the hospital after coming across the business-end of a brown recluse spider during a house call. He’s a perpetually nice guy but he’s also sort of a clumsy doofus: his attempts to flirt with a nurse (Alexis Kendra) are awkward, to say the least, and he always seems one misstep away from complete chaos. Alex gets called into action when the hospital administrator approaches him about an issue: “something” appears to be loose in the hospital and they want Alex to kill it, an offer he gladly takes up in order to wipe his exorbitant bill clean. When he learns that the creature appears to be a large spider, Alex feels he’s more than up to the task: “I become a spider to catch a spider.”

As it turns out, however, Alex doesn’t really know what he’s up against. You see, this is no abnormally large spider, as we come to see: this thing is obviously some sort of mutated monster, an acid-spraying, lightning-fast nightmare that uses the hospital’s ventilation system to move from victim to victim. Suspicions are confirmed when the military quickly shows up, led by no-nonsense Major Braxton C. Tanner (Ray Wise). Turns out that the spider in question was actually part of a government experiment that went awry (natch) and they’re now faced with a creature that will continue to grow, unchecked, until they can destroy it.

With the help of his faithful partner (and resident security guard) Jose (Lombardo Boyar), along with Lt. Karly Brant (Clare Kramer), a soldier who’s a terrible shot but seems to have a crush on the exterminator, Alex pursues the rapidly growing spider from the hospital, into the sewers and, finally, onto the very streets of the terrified metropolis. To destroy this dreadful abomination, Alex is gonna needs lots of help, some hardcore firepower…and more than a little luck.

Despite coming out of the gate strong (incredibly strong, to be fair), BAS! wasn’t the grand slam that I was hoping it would be, although it still ended up being a ton of fun. There’s so much about the film that really works that it’s easier to gloss over the elements that don’t, chief among them being the often tedious relationship between Alex and Jose. For the most part, Jose exists as a gentle Mexican stereotype, never mean-spirited, per se, but ridiculously clichéd, none the less. His constant banter gets really grating, after a while, as does the ham-fisted Abbott and Costello routine that Grunberg and Boyar effectively beat into the ground. Although I didn’t find their interaction to be as noisome by the film’s final third (they actually become a rather cute duo), there’s an awful lot of corn to wade through to get there. The film could also get a little silly, at times, and I noticed that the CGI tended to get dodgier the bigger the spider got: by the time it’s car-sized, we’re squarely in SyFy territory, effects-wise.

But these are all minor quibbles, ultimately, the kinds of issues that plague pretty much any B-movie. For the most part, BAS! hits all of its beats and manages to maintain a breezy, good-natured sense of humor that keeps things from ever getting overly serious…not that a film about a giant spider could ever be overly serious, mind you, but you get the point. Grunberg, most notable as one of the “heroes” on the bygone “Heroes” show, is pretty great as the lead here and ably carries the film: he’s a perfect combination of innocence and sass, never so smarmy as to be insufferable, yet steely enough to be believable. It’s also nice to see Wise play the straight guy, for a change: his take-charge Major is still recognizably Wise but it’s a much flintier version than we normally get. I also really like the ending, which gives the perfect set-up for a sequel (“What’s the biggest cockroach you’ve ever seen?”) without seeming too obvious.

If anything, Big Ass Spider! is a gleeful throwback to the era of good-natured, drive-in flicks, the kind of film that goes perfectly with a lukewarm sixpack of cheap beer, a carload of friends and a warm, summer night. It won’t reinvent the wheel, technically speaking, but it doesn’t really need to (or mean to), either. If the thought of a Volkswagon-sized spider rampaging through a city park and eating a pervy jogger played by Troma head Lloyd Kaufman puts a smile on your lips, this is absolutely the film for you. I might dislike real spiders with a fervor approaching religious zeal but I’m happy to hang out with this webcrawler any day of the week.