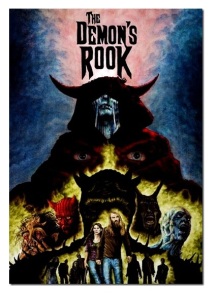 Stuffed to bursting with more genuine imagination, passion, invention and pure love for the genre than most films with a hundred times the budget and resources, burgeoning indie auteur James Sizemore’s The Demon’s Rook (2013) is that rarest of films: it’s a modern throwback to the glories of ’80s direct-to-VHS spectacles that manages to not only nail the look but also replicate the wide-eyed, anything-goes feel of the era. To boil it down to its purest essence, The Demon’s Rook is the real, no bullshit deal and Sizemore may just prove to be this generation’s Sam Raimi.

In certain ways, The Demon’s Rook plays like an ultra low-budget version of Clive Barker’s Nightbreed (1990), as filtered through an ’80s-era Raimi sensibility. Young Roscoe (Emmett Eckert) seems to be fairly chummy with a demon named Dimwos (John Chatham): the two hang out in Roscoe’s room, at night, and the boy is constantly drawing pictures of his demonic buddy. This fact doesn’t really seem to bother Roscoe’s parents, who are either the world’s most understanding mom and dad or pretty confident that their kid has an overactive imagination.

Turns out, they should have paid better attention. One night, something emerges from the mysterious opening in the woods and reduces Roscoe’s parents to a couple of scorch marks on their bedspread. Dimwos leads the boy to the woods, straight to the mysterious opening. Flash forward “years later” and we see the now-adult Roscoe (writer-director Sizemore) emerge from the opening. He’s got a bit of the ol’ “wild man of the woods” look to him, along with some newly honed psychic powers (fuck the Clapper: Roscoe can turn off lights by just pointing at them!).

Roscoe reconnects with his childhood love, Eva (Sizemore’s real-life wife, Ashleigh Jo Sizemore), in time to warn her of a pending demon invasion. Sure enough, three very bad demons (helpfully color-coded as white, black and red) emerge from the fog-shrouded forest cavern and proceed to wreck unholy hell on the hapless denizens of the area. The demons’ preferred method of destruction is to possess their victims, thereby causing them to either rip into those around them or rip into themselves, depending on the needs of the particular scene. One of the “possessed” even turns into a sort of man/monster hybrid (the transformation scene is just about as good as this sort of thing gets) and runs around attacking everything around him like a super-pissed off Toxic Avenger. Needless to say: good stuff.

As Roscoe and Eva try to quell the unholy onslaught, things get even hairier after the white demon reveals itself to be a bit of a necromancer and raises the inhabitants of a nearby cemetery as a gut-munching, zombie army. Zombies, demons, a wild concert in a barn that’s one part hillbilly-rave-orgy and two-parts Grand Guignol slaughterhouse…it’s enough to make anyone throw in the towel! Good thing for the locals (and the world) that Roscoe and Eva are made of much stronger stuff: when it comes to bloodthirsty demons, these are definitely the people you want on your side. So, blast your Bovine Fantasy Invasion tape, keep an eye out for the Manbeast and hold on to your guts: The Demon’s Rook is one helluva rollercoaster ride right to the wild side!

First and foremost, it’s obvious that The Demon’s Rook is a real labor of love: not only do the majority of the crew, including Sizemore, wear more hats than a haberdasher (this is, after all, the very definition of “indie filmmaking”), but the attention to detail and infectious good humor seem to indicate that no one was just punching the clock. The cinematography looks great (Tim Reis, who also edited, is an easy nominee for MVP, although he’s got a lot of competition) and the score, attributed to a variety of performers, is absolutely phenomenal: the running joke about Bovine Fantasy Invasion is pretty great, culminating in the aforementioned wildly awesome barn blowout. While the score is fun and interesting, on its own, it also perfectly fits the film’s ’80s-video vibe: as someone who grew up on these films, this gave me a pretty warm sense of nostalgia, let me tell ya.

One of the most obvious (and impressive) things about The Demon’s Rook is its outstanding production design and practical effects. The film has an amazing atmosphere: with its thick, rolling fog and hard red, green and blue lighting, there are times when Sizemore’s micro-epic recalls nothing so much as the glory days of Dario Argento’s eye-popping oeuvre: the cave, in particular, is a really great, simple setpiece and a perfect example of how “less” can always be “more,” in the right hands.

Like the direct-to-video treasures that it so lustily emulates, The Demon’s Rook is a veritable orgy of disembowelments, exploding heads, severed limbs and over-the-top carnage. The kicker here, of course, is that not only are the effects all practical, they’re all absolutely astounding: from the makeup to the costuming to the gore effects, The Demon’s Rook actually looks better than most “professional” films. There’s a sense of physicality, here, that can only be achieved through latex, fake blood and boundless imagination. It says a lot when the worst thing that I can say about the effects is that the Manbeast ends up looking like a super-expensive, high-end Halloween mask: if that’s the biggest effects issue, I’d say they knocked the whole thing out of the park.

The stellar effects go hand-in-hand with the film’s constant sense of invention and imagination: like the best, gonzo ’80s films, there’s very much the sense that just about anything could be lurking around the corner. The film’s mythology is original (I, for one, cannot reiterate how unbelievably refreshing that is in this cookie-cutter era of remakes and re-imaginings) and there’s always the sense of larger-scale world-building going on in the background. While there’s plenty of room for interpretation and further explanation (I won’t pretend that the entire film made complete sense, only that it made “sense enough,” in a Lucio Fulci kind of way), Sizemore never gets so bogged down in the details that it prevents the action from rocketing forward at a nicely frenzied pace. If the “Dark Womb” and its demonic inhabitants are going to be Sizemore’s signature fantasia, I can’t wait to see how the world expands and develops.

As should be fairly obvious from the above, I’m a huge fan of The Demon’s Rook: whether it’s the genuinely terrifying red demon (talk about a perfect synthesis of design, function and performer), the ridiculous “I’m gonna marry Barbara!” jig, the Troma-approved barnstravaganza (complete with bemasked nude dancers, apple-bobbing, moonshine and metal detectors that look like weedwackers) or any of the endlessly inventive gore scenes (talk about lighting up the “Italo-horror” portion of my little, reptilian brain), there’s a whole lot to love here.

This isn’t, of course, to infer that The Demon’s Rook is a perfect film: it falls victim to many of the same issues that plague most micro-budget indies, although none of these prove to be critical injuries. The acting, with the exception of the Sizemores, is universally rough and ranges from non-acting (in every sense of the term) to passable understatement. The pacing can be uneven, especially in the film’s first half, and there’s plenty of “dead air,” so to speak: at nearly two hours, there’s no question that The Demon’s Rook could be tightened up.

The most critical issue ends up being the sound mix, which is so lopsided as to be constantly noticeable. Even with the volume cranked up to the max, I found myself missing dialogue, while the ensuing score/sound effects would end up shaking the walls. This becomes doubly frustrating given that the film isn’t exactly dialogue-lite: I have a feeling that some of my confusion might have been allayed if I were only able to hear what people were saying. To be honest, the sound mix is so bad that, in a lesser film, it would have turned me off almost immediately. It’s to the film and filmmakers’ immense credit that I ended up gritting my teeth and just baring through it: I’m certainly glad that I did but I wonder how many others might not be as willing to meet the film halfway.

Ultimately, despite a few shortcomings and the same growing pains that any like-minded filmmakers might experience (neither Raimi nor Peter Jackson sprung fully formed from the air, like Athena out of Zeus’ cranium), it’s quite obvious that The Demon’s Rook is something special. James Sizemore, Ashleigh Jo Sizemore (like James, she has her hand in everything from creating the demons’ unique language to working with the production design and effects) and the rest of the ultra-talented crew have an unabashed love for not only fantastic-horror but indie films, in general. In many ways, The Demon’s Rook reminds me of Equinox (1970), the ridiculously cool low-budget creature flick that would go on to influence Raimi’s iconic The Evil Dead (1981). If there’s any justice in the world, The Demon’s Rook will go on to inspire a whole new generation of horror filmmakers in the same way that The Evil Dead once did.