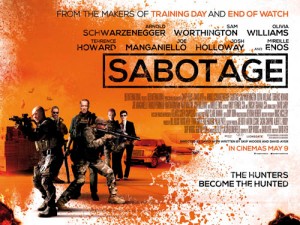 When we’re talking about action films, there isn’t necessarily anything bad about loud, dumb movies: as someone who worked his way through a veritable mountain of cheesetastic ’80s flicks (picture the ones where the hero takes out the bad guy with a close-range rocket launcher to get the full effect), I can attest that the stupidest films are, quite often, the most thrilling. After all, when we’re bombarded by so much chaos, conflict and real-world violence, sometimes it’s nice to just pop the cap on a cold one, turn off your brain and thrill to explosions, sneered badassitude and black-and-white concepts of good and evil, no?

There is, however, a limit, a tipping point, if you will: invisible to the naked eye, there is, nonetheless, a fine line between stupid and clever (thanks, Tap). David Ayer’s big, loud, Schwarzenegger vehicle, Sabotage (2014), has to see the line, since the whole film seems like a conscious effort to craft the biggest, dumbest, loudest action film possible: the film’s mantra seems to be “bigger is always better” and let me tell ya…this film ends up riding a giant, turbo-charged rocket straight into the heart of stupid, boldly going where few have dared to tread. Existing in a cinematic universe where Antoine Fuqua and Jerry Bruckheimer are the alpha and omega of existence, Sabotage is the ultimate fizzled bonfire: all smoke, precious little actual fire.

Sabotage concerns the various (very bad) activities of a group of rogue DEA agents, the kind that are de rigueur for Hollywood but don’t really paint the rosiest picture of our nation’s continued war on drugs. Led by the leather-faced, oddly-coiffed John “Breacher” Wharton (Arnold Schwarzenegger), the crew look (and sound) like various rejects from several seasons of American Gladiator: Monster (Sam Worthington), Grinder (Joe Manganiello), Neck (Josh Holloway), Sugar (Terrence Howard), Pyro (Max Martini), Tripod (Kevin Vance), Smoke (Mark Schlegel) and Lizzy (Mireille Enos, so amazingly over-the-top that she doesn’t need a cool nickname…she just “is,” dude). Their modus operandi is pretty simple: blow the ever-loving shit out of the bad guys, steal their money, blow up as much stuff as possible, get fuckin’ craaaazy, man…lather, rinse, repeat. It all works splendidly because, well, they’re badasses, man…aren’t you listening?

A fly enters the ointment, however, when one of their “jobs” results in the death of Smoke and the loss of $10 million in stolen drug money. The crew start falling out because agitated shouting is required (along with some good, ol’ character building, don’tcha know?) and, as we all know, you can’t trust a thief…especially if you’re a crooked, bloodthirsty fellow thief, I’m imagining. Things really get complicated, however, when members of the squad start to mysteriously die, one by one. When one guy wakes up to find his RV on the railroad, moments before impact, local police think it could possibly be a case of too much spiked eggnog. After lead detective Carolyn Brentwood (Olivia Williams) slips in a slick of blood the size of Michigan when her and Breacher go to interview another team member, however, her spidey sense is definitely tingling: when she looks up and sees the poor guy nailed to the ceiling, eviscerated, she definitely begins to think that these may be more than simple household accidents.

Working with the overly cagey, withdrawn Breacher, Brentwood tries to gather information from the others, yet meets with nothing but cold resistance: the troops have circled the wagons and no strangers are getting through. As more and more of his squad end up dead, however, Breacher is suddenly faced with the shocking idea that the killer may not be a cartel hitman…it may be someone a little closer to home…dun dun duuunh!

Alright, here’s the thing: I was more than willing to give Sabotage as much slack as it needed, mostly because I was duly impressed with director Ayer’s previous effort, the Jake Gyllenhaal-starring End of Watch (2012). I was able to look past the film’s overly kinetic, restless action sequences, even when said restlessness began to extend into non-action, “quiet” parts of the film. I didn’t care for the shaky camera or odd, overly-saturated color palette but I’d seen plenty worse. I didn’t really even mind the on-the-nose, endlessly posturing dialogue: you have to expect a certain measure of shit-talking in films like this, after all, and who doesn’t love a badass ass-kicker?

At a certain point, however, all of Sabotage’s dead weight ends up dragging the film straight to Davy Jones’ locker, my patience be damned. Perhaps it was the unbelievably douchy scene where Brentwood comes by to speak to the crew during a pool party and the whole thing devolves into ridiculous chest-thumping and frat-boy innuendos: I can’t tell you how bad I wanted to slap the fucking smirk straight off Joe Manganiello’s dumb mug right about the time he got up in the detective’s face and started hambonin’ her (thanks, Regular Show). Maybe it was the insultingly obnoxious “banter” between Brentwood and her partner, Jackson (Harold Perrineau), scenes which reminded me of the cringingly bad interplay between Jay Leno and his ever-suffering band-leader, Kevin Eubanks. Perhaps it was the climatic chase scene that involved one of the characters blasting away at the good guys from a car trunk, chewing and swallowing so much scenery that you can feel the film’s world unraveling from the massive gravitational pull of it all.

One thing’s for certain, however: the acting on display here does no one any favors. Schwarzenegger comes off the best, unsurprisingly, although that damned dead marmot on his head makes it patently impossible to take him completely seriously. His world-weary, “I’m too old for this” schtick actually works, much of the time, and he even gets a few “relatively” reflective moments to do a little modest acting…nothing that will make folks forget his glory days, mind you, but a decent enough continuation of his un-retirement. Other than that relative high point, however, the rest of the cast is pretty much a wash. While all of them are patently ridiculous, I must reserve a special amount of scorn for Enos and Manganiello: at no point in the film are either character anything approaching realistic, likable or even interesting…they’re just unbelievably loud, crude, obnoxious and rather hateful little cliches (Manganiello the huge, unstoppable Cro-Magnon, Enos the “tough chick with bigger balls than the whole combined crew”). As someone who’s a huge fan of Enos’ work on the cable series The Killing, I must admit to being completely flabbergasted by her film work: her previous performance, in Devil’s Knot (2013), was pretty awful but her work as Lizzy vaults her into a whole new realm of terribleness. If the only requirement for portraying a badass character is to shout til your veins pop, Enos’ Lizzy is our new gold standard.

And there, in a nutshell, is pretty much Sabotage’s problem: it’s a thoroughly average action film that’s completely undone by the constantly shifting tone, terrible characters/acting and patently ridiculous situations. One of the most puzzling aspects of the film, for me, was the way in which it almost seemed to have a foot in the horror world: between the splattery aftermath of the great train kapow and the evisceration scene that’s fully Hannibal Lecter approved, Sabotage often feels like a slasher film in action clothing, ala No One Lives (2012). While the gore is well done, it also feels completely out-of-place, similar to how the occasionally intentional comic beats fail miserably.

Despite how it sounds, I didn’t hate Sabotage, although I will freely admit to hating many of the performances. Rather, the film reminded me of any number of bottom-of-the-barrel actioners that I used to gorge myself on during rainy weekends as a kid. Without all of the critical injuries, I don’t see any reason why Ayer’s film couldn’t limp into the finish line. As it stands, however, I can’t help but feel that someone should have done the noble thing and just taken it out in the field to be shot, instead.