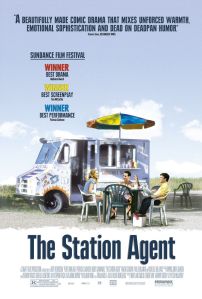 Some folks are just slightly out of step with the rest of the world, despite the best efforts of the rest of the world to bring them back into line. Humans are social creatures, we’re told, and companionship is necessary for our survivals (and mental health). The best way to succeed in life is through a positive outlook and cheery disposition: like attracts like, after all, and grim, unpleasant people will lead grim, unpleasant lives. In order to succeed, you must constantly push ahead, remaining endlessly active: idle hands and all that, you know. These are all truisms, little global facts that will help us all become better people…if we’d just listen and get in line, of course. What about those individuals who don’t “play nice,” however? The people who would rather go it alone than hang out with the crowd? Those folks who don’t find a smile to be their resting expression but something closer to a resigned grimace? Are the dour and serious-minded among us fit only to be reformed, devoid of any societal use on their own? Tom McCarthy’s low-key, dour independent film The Station Agent takes a good look at one such “unfriendly” individual and comes up a similar conclusion: even loners need companionship…even if they don’t realize it at the time.

Finbar McBride (Peter Dinklage) runs a model train store with Henry Styles (Paul Benjamin): the two live together and appear to be each other’s only friends, enjoying a quiet, tranquil existence filled with lots of comfortable silences and humble meals in their tiny kitchen. Nothing can remain forever, however, and Fin’s life is upended when his only friend suddenly drops dead. Henry has sold off his store, leaving Fin unemployed, but he’s also bequeathed his friend some land with an abandoned train station on it. Fin pulls up stakes and moves into the train station, making it his home. Once there, he meets his new neighbors: Joe (Bobby Cannavale), a boisterous, out-going, talkative food-truck owner and Olivia (Patricia Clarkson), a rather odd, high-strung artist. Joe has a tendency to park his food truck right outside Fin’s new doorstep, making him something of a mobile next-door-neighbor.

At first, Fin wants nothing more than to run down the clock of his life in peace, away from any other human contact. Bobby, however, takes a real shine to Fin and seems determined to become friends with him, even if it means wearing down his resistance with a constant, never-ending stream of good-humored chatter. Along the way, other people end up in Fin’s orbit, people like young Cleo (Raven Goodwin), local librarian Emily (Michelle Williams) and Olivia’s rather bewildered ex-husband David (Mad Men’s John Slattery). Despite his best intentions, Fin ends up interacting with all of them, to one extent or another, and each one brings him one small step closer to rejoining the rest of humanity. Will Fin ever embrace the friendship around him or will he continue to sequester himself away from the world, greeting everything with downcast eyes and a sigh? Will romance bloom in surprising ways? Or will long-held secrets and Fin’s naturally stand-offish demeanor doom him to a life alone?

One of the charges frequently leveled against indie films is that they have a tendency to be unrelentingly dour and po-faced: this certainly isn’t anything that The Station Agent works particularly hard to disavow. If anything, the film may stand as one of the most serious “comedies” I’ve ever seen, although most indie comedies from the past decade tend to be a bit of a misnomer. There are certainly funny, upbeat moments in the film (almost all courtesy of Bobby Cannavale) but the overall mood is definitely one of serious pensiveness. Peter Dinklage mopes about the film with an expression that seems more befitting of Wuthering Heights than anything with the descriptor “comedy” and Olivia’s backstory (and subsequent breakdown) keep the story in some pretty dark territory. There’s also the notion that only Olivia, Joe and Cleo (and possibly Emily) ever treat Fin with anything approaching warmth or humanity: everyone else he comes across is content to mock him, snap photos on the sly or gawk as if he were a three-headed space alien.

Since the film is so serious, and Fin is set up as so stand-offish and unpleasant, there’s frequently a disconnect between the characters. I can’t count the number of times that I visibly cringed whenever Joe said something to Fin: Joe was always so sweet and happy, while Fin was always so dismissive and curt that I really just wanted to grab Fin and shake the shit out of him. It’s certainly not fair to make Fin responsible for “babysitting” Joe, as it were, and being friendly to him. On the other hand, however, Joe does absolutely nothing derogatory to Fin, yet often gets a big, heaping helping of nothing, in return. Once Fin warms up, a genuinely sweet, touching friendship develops. Even then, however, there’s still a sense of distance and disconnect: you get the feeling that Fin stops smiling the moment his “friends” can no longer see his expression.

Despite Fin’s rather churlish attitude, however, The Station Agent is still able to make some nice points about friendship and companionship. Deep in the heart of the film is the idea that real friends, the kind that stick around for a lifetime, never require any more of us than our presence in their lives. There’s real power to the moment where Fin finally lets Joe sit and read with him: even if Joe can’t quite keep his end of the “complete silence” deal, this feels like a real breakthrough moment for both. Equally powerful is the scene where we see Fin, Olivia and Joe sitting quietly together, staring off into the distance, drinking wine and smoking a joint. No one says anything but there’s nothing uncomfortable about the silence. This, the filmmakers seem to be saying, is the real definition of friendship: real friends don’t need to talk…real friends would be just as content to sit there, listening to the buzz of mosquitoes in the warm summer air, enjoying their time together on earth.