31 Days of Halloween, Beneath, Berberian Sound Studio, Cam2Cam, cinema, Dark Skies, film reviews, films, Halloween, horror, horror films, mini-reviews, Movies, October, Pontypool, The Dark Crystal, The Fog, The Lazarus Effect, The Pyramid, The Snowtown Murders, The Woman in Black 2: Angel of Death, What We Do in the Shadows

With Halloween almost upon us, I find myself falling further and further behind in my quest to document everything that I’ve watched during the month of October. In an effort to help the process along a little, I’ve decided to split my Week 3 Mini-Reviews into two separate parts. This first post will deal with all of the films watched from Monday to Thursday of that week. I’ll post the second half (Friday-Sunday) as soon as I’m able. If you’re having trouble picking some suitable Halloween viewing, let any or all of these serve as some humble suggestions. 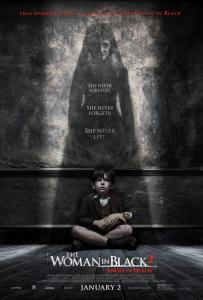 The Woman in Black 2: Angel of Death — Austere, leisurely-paced and more interested in building an oppressive atmosphere than in shocking jaded audiences with mindless gore, Hammer Films sequel to their surprise Daniel Radcliffe-starring hit is a decidedly old-fashioned film. For a time, the film works marvelously: the isolated manor house is a distinctly creepy, well-utilized location, surrounded by marshes and darkly gleaming water on all sides and possessed of plenty of those “locked doors that you shouldn’t unlock.”

Well before the finale, however, the film begins to flounder and spin its wheels, doling out loud jump scares and creepy background figures like any number of lesser films, while dooming its cast to do precious little besides wandering down one increasingly dark corridor after another. It all winds up at a resolution that’s both overly complex and too slight, losing whatever made the film unique in the first place. To add insult to injury, the film is often way too dark, rendering many of the visuals and scares rather moot. I appreciate a dark, creepy atmosphere as much as the next horror hound but come on: when you find yourself staring at an inky black screen, watching vague movements and trying desperately to figure out what’s happening, well…that’s not atmosphere…that’s frustration, pardner. 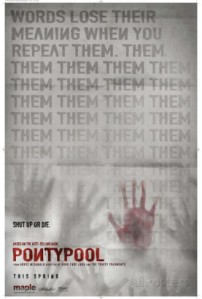 Pontypool — An absolutely essential modern classic and one of the most unique zombie films to ever grace the silver screen, Bruce McDonald’s Pontypool (adapted for the screen by the book’s author, Tony Burgess) is one film that I like to return to as often as possible. Featuring a phenomenal, career-making turn from the amazing Stephen McHattie as a big-city shock jock demoted to the boonies of a tiny, sleepy, Canadian town, Pontypool takes everything we know about zombie films and burns the rulebook. The concept is mindblowing (the “virus” is spread through the English language and can only be fought by “misunderstanding” commonly used words), the performances are exceptional and the claustrophobic atmosphere (the majority of the film takes place in the church basement where the radio station is located) digs its hooks in and never lets go. Above and beyond all else, however, is the one and only Stephen McHattie, giving the kind of performance that makes you want to replay each of his scenes after they’ve finished. This is, without a doubt, one of my all-time favorite films and deserves much more acclaim than it normally receives, similar to Antonia Bird’s equally-perfect Ravenous. 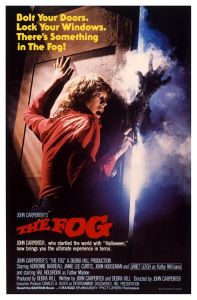 The Fog — Although not quite as well-known as classic Carpenter films like Halloween, The Thing and Escape From New York, this under-stated follow-up to Halloween is actually one of his best, most frightening films. The set-up (vengeful leper sailors return from their watery grave to exact revenge on the coastal town that murdered them a hundred years before) is the stuff of campfire tales and there’s an impenetrable air of suffocating dread that covers the entire film like the titular fog that rolls through town. This features a pretty nifty cast (mother and daughter Janet Leigh and Jamie Lee Curtis appear, along with the always amazing Adrienne Barbeau (Carpenter’s wife at the time), John Houseman, Hal Holbrook and Tom Atkins) and there’s no denying that the ghostly sailors (who are prone to be quite stabby) are pretty damn creepy. The opening sequence, where things subtly go wrong in the town between the hours of midnight and one, is one of the very best horror openings ever. Needless to say, avoid the remake at all costs. 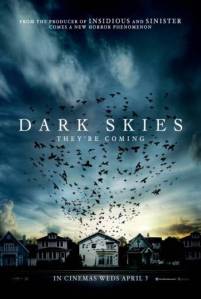 Dark Skies — Despite some particularly head-slapping “Why did they do that moments?,” Dark Skies is a pretty decent alien invasion flick with lots of creepy atmosphere and a handful of tense setpieces. The acting is pretty good, although JK Simmons handily steals the film when he pops up as a preternaturally serene and almost Zen-like alien abduction expert. A calm Simmons? That might be the most out of this world thing of all! 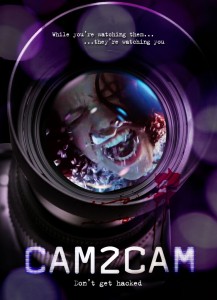 Cam2Cam — This is actually two films in one, which I rather suspected but later confirmed. The first film, which I took to be an extraordinarily long opening setpiece, is a tense, sleazy little bit of stalk ‘n slash that managed to be gripping, if thoroughly unpleasant. The second film, which comprises the rest of the movie, is a complete slog, a tedious, obvious, repetitive and, at times, quite stupid piece of product which manages to fail on pretty much every level. Favorite “Huh?” moment? The lead character walking through the crowded streets of Bangkok, covered in blood and holding an ax. No one even blinks an eye because, you know, foreign places are super scary already. Or something like that. 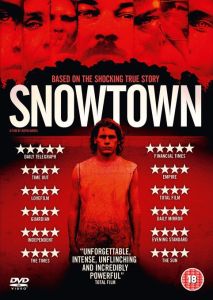 The Snowtown Murders — Similar to Henry: Portrait of a Serial Killer, this unflinching, gritty and rather repellant film takes a look at the devastation wrought by one of Australia’s most notorious serial killers, John Bunting. While the story is filtered through young Jamie, it’s Daniel Henshall’s Bunting who really guides us through this tale of misplaced loyalty, brutal vigilantism and pure, unadulterated evil. Absolutely nothing about this film is fun, in the slightest way, but that doesn’t stop it from being one of the most powerful, unforgettable films I’ve ever seen. Like Salo, this is a movie you don’t watch twice. 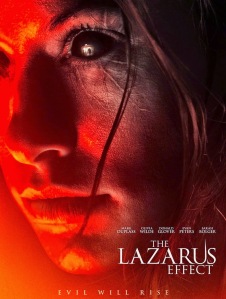 The Lazarus Effect — I went into this expecting nothing more than typical, modern multiplex horror fare: conventional storytelling, an overabundance of CGI, loud jump scares at perfectly-timed intervals and a complete dearth of anything truly interesting. What I ended up getting, to my complete surprise, was an intelligent sci-fi-oriented horror film with a great cast (Olivia Wilde, Mark Duplass (one of my favorite modern actors), Donald Glover, Ray Wise and American Horror Story’s Evan Peters), some genuine creepy moments and a thought-provoking premise. If the final half hour ends up devolving into my preconceived notions, it doesn’t really diminish what came before. For multiplex fare, this is pretty darn good. Who would have thought that the director of Jiro Dreams of Sushi would have a horror film in him? 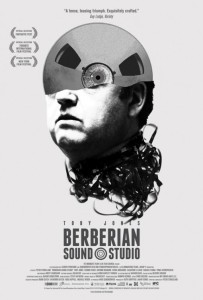 Berberian Sound Studio — In many ways, Berberian Sound Studio is the furthest thing possible from a horror film. After all, there’s nary a monster, insane killer or mutating virus to be found anywhere. Don’t let the outside covering fool you, however: patient viewers will soon realize that BSS exists within the same rarified company as Polansky’s Repulsion or Jacobsson’s Evil Ed in that it doesn’t portray outside horrors so much as the much more terrifying horrors of a fractured mind. Although this tale of a mild-mannered American sound editor who somehow gets involved with a sleazy Italian horror film (which seems to be a rip-off of Argento’s classic Suspiria) is often more droll than horrifying, it ably portrays the slippery slope that leads from “normal life” into the twilit land of utter, howling insanity. For my money, one of the most brilliant films of the past decade. 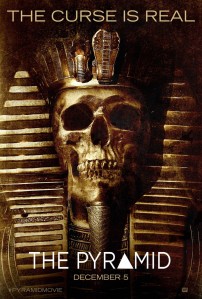 The Pyramid — Sometimes, a film’s concept is so good that it helps to smooth over some otherwise choppy waters. Take Gregory Levasseur’s The Pyramid, for example. As someone with a lifelong love of archaeology and all things Egyptian, a horror film about a group of scientists uncovering and exploring a previously buried pyramid would seem to be a dream come true. For this reason, I was willing to put up with some thoroughly unpleasant characters/actors, a found-footage angle that always seemed like an after-thought and weird elements like the jackal/rat/cat things that are constantly jumping out of the shadows. For a time, I was able to keep the blinders up but the whole thing collapses into so much crap by the final third that I was forced to face a pretty obvious truth: The Pyramid is about as worthless as a handful of sand. 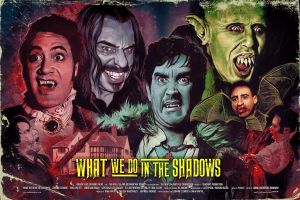 What We Do in the Shadows — There’s not much to say about this film beyond the obvious: I absolutely loved it and consider it to be an easy frontrunner for horror film of the year, if not one of the overall best films of the year, regardless of genre. Equal parts hilarious, heartfelt and horrifying, this look into the “real lives” of a group of New Zealand roommates, who also happen to be vampires, is an absolute blast from the first frame to the last. Although it plows the same basic land as the hilarious Belgian film Vampires (2010), What We Do in the Shadows is absolutely its own beast and a simply wonderful one, at that. I foretell that this will be regarded with the same respect that genre fans give to staples like Let the Right One In within the next decade. 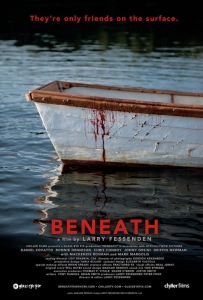 Beneath — I absolutely adore genre stalwart Larry Fessenden, so I was unbelievably excited to watch Beneath: after all, Fessenden, a monstrous fish and a group of teens trapped on a boat sounds like the key ingredients for another classic along the lines of Wendigo or The Last Winter. Unfortunately, what I got was actually the first Fessenden flick that has not only disappointed me but that I’ve actively disliked. What went wrong? Well, the concept is great, the fish looks fantastic (great to see old school effects work) and the location is perfect. The problem ends up being that every single character is a complete and total piece of shit. When you have a film filled with hateful characters, well, let’s just say that it makes it a little hard to be invested. By the ten minute mark, I pretty much wished that the fish would eat every last one of ’em. I don’t normally approve of remakes but I kinda wish someone would take this concept and do it right. 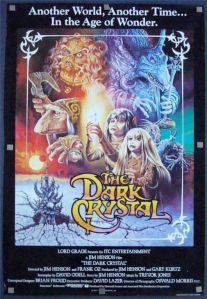 The Dark Crystal — This was a childhood favorite of mine, along with films like Labyrinth, The Last Starfighter and the animated Hobbit. As often happens, however, the films of our youth don’t always hold up to the unforgiving light of adulthood (see my current hatred of Clerks, which used to be a youthful staple). In this case, however, I’m happy to report that this particular boyhood love remains as potent and effective today as it did in the past. The puppetry is out-of-this-world (would you expect anything less from Jim Henson?), there’s a genuine sense of menace and threat that you don’t normally get in kids’ films and the whole thing is visually spectacular. The basic story (an uncertain adolescent must undertake a dangerous quest in order to save the land he loves) is almost as old as the written word but The Dark Crystal manages to fold the cliche into an utterly absorbing, captivating new form. This is the kind of kids’ movie that they just don’t make anymore for a very good reason: they can’t.