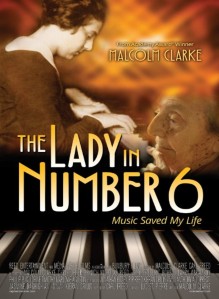 At the time of her death last February, at the age of 110, Aliza Sommer-Herz was the oldest, living Holocaust survivor. She was also an amazingly vibrant personality who captivated all those around her with her expert piano-playing, a skill that she cultivated in the years before she was captured by the Nazis and sent to a concentration camp. As Malcolm Clarke’s Oscar-winning short documentary, The Lady in Number 6 (2013) shows, both aspects of Aliza’s life, her piano-playing and her will to survive, were intrinsically linked. As the subtitle states, “Music saved (her) life,” to the great benefit of the rest of us.

Born in Prague in 1903, Aliza was part of an artistically inclined family that counted both Gustav Mahler and Franz Kafka as close, personal friends. Studying under ace pianist Artur Schnabel, Aliza became quite the prodigy in the years leading up to the Nazi Occupation. This skill would end up serving her well once she was transferred to a concentration camp: suitably impressed by her skill, the camp guards kept Aliza around as a sort of “human jukebox,” with any and everyone (including the infamous “Angel of Death,” Josef Mengele) stopping by to request songs and spend time getting lost in her playing. She would go on to perform some 100 concerts while interred in the concentration camp, earning the admiration of everyone around her, prisoner and guard alike.

After surviving the concentration camp, along with her son, Raffi, Aliza would go on to a long, happy life, one characterized by her unrelentingly upbeat attitude (one of her mottos was “It’s up to me whether life is good, not up to life.”) and her continued love of the piano. Even at age 109, during the filming of the documentary, Aliza displayed a vitality and joie de vivre that would be difficult to maintain in someone a third of her age, let alone under the often terrible conditions that Aliza lived through.

Subject-wise, The Lady in Number 6 is unbeatable: Aliza Sommer-Herz is a fascinating subject with a rich, powerful story and enough life lessons under her belt to teach us all for the next century. While any story about the Holocaust is going to be tragic and terrible, at its heart, Aliza manages to imbue so much positivity and love into her tale that it’s all but impossible to get through without a big smile on your face, even if a tear might threaten to roll down your cheek at any minute. At one point in the short, someone makes the observation that when people hear the word “Holocaust,” they only think about the gas chambers and six million dead: there was a whole world in-between those terrible extremes, a world which included many survivors, just like Aliza. In every way, then, The Lady in Number 6 becomes a story of survival and overcoming tragedy, rather than a sorrowful rumination on the unforgettable evil of the Holocaust.

While I fell completely in love with the subject of Clarke’s film, however, I must admit to being less than enthralled with the film, itself. Truthfully, I found much of the film to be a little clunky and choppy: there was also way too much “Vaseline-lens” for my tastes, since this had the effect of forcing emotion into scenes that needed no such help. Aliza is such a fascinating, positive force of nature that no such trickery is wanted/needed: a much more straight-forward style would have suited this better, since Clarke’s filmmaking is often too fussy to be as invisible as it should be.

Technical quibbles aside, however, The Lady in Number 6 is really a lovely little film and deserves to be seen by everyone: if there were more people like Aliza Sommer-Herz in the world, it’s doubtful that we’d be in the kind of straits that we’re currently in. For her ability to keep a brave, hopeful, loving attitude in the face of seemingly insurmountable odds, Aliza should live on in our hearts forever.