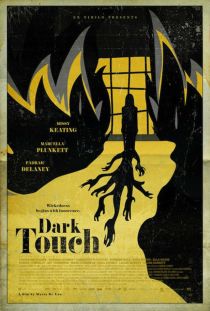 As someone who watches a lot of films, particularly horror and exploitation fare, I occasionally find myself in the position of watching something that, in hindsight, I would rather not have seen. This can be due to several factors: visuals/scenes that are excruciatingly nauseating or graphic; themes/plot elements that are genuinely disturbing (I’m thinking more child and animal abuse than alien abduction or masked slashers); constant and never-ending misery, etc. Over the years, I’ve seen a few films (Salo, Cannibal Holocaust, Lovely Molly, Nekromantik, Irreversible, Henry) that I’ll never quite forget but will never actively think about for fear that details of each pop fresh into my skull (which they just did as I typed out this sentence). Unfortunately, I inadvertently added to this list with my recent viewing of Marina’s de Van’s unrelentingly disturbing Dark Touch.

On the outside, Dark Touch doesn’t seem particularly disturbing but the devil is definitely in the details with this one. The film details the struggles of Niamh, an 11-year-old irreparably scarred and twisted by abuse. Her mother and father have just been massacred in what the police in her small Irish town are calling a brutal home invasion. When Niamh goes to stay with Nat and Lucas, kindly friends of her deceased parents, it seems that she may just have a chance at happiness. Alas, the seeds of abuse can be planted deeply and the weeds they produce can choke and kill any happiness. Niamh already knows this and, soon, Nat, Lucas, their two small children and the entire town will learn this, as well.

In many, many years of watching films, I’ve rarely seen a film as fundamentally unpleasant as Dark Touch. For one thing, the film is unrelenting grim and gray, from the first frame to the last frame. There is absolutely no humor, levity or happiness to be found anywhere within the film’s 90 minutes. This does, of course, befit a film that focuses on the horrible aftermath of physical and sexual child abuse. Imagine if, however, the entirety of Requiem for a Dream consisted of the scene with the arm abscesses. There is misery and then there is misery: Dark Touch manages to stake out a new place at the head of the pack.

It’s no secret or spoiler to note that Niamh is an abused child and that her parents are the abusers: we’re given this information within the first 15 minutes of the film. The only mystery, ultimately , ends up being just how far Niamh will be stretched before she breaks. In many ways, Dark Touch is like a pitch-black, pre-teen version of Carrie, with abuse subbed for the oppressive religious angle of King’s classic. There was never much doubt in my mind as to who, exactly, was causing the mysterious deaths (if you’ve seen at least two poltergeist/moody kid horror films in your life, this should come as no surprise whatsoever), although I’m not sure that the film ever posits itself as a genuine mystery, so this is probably a moot point.

As mentioned, the film is exceedingly grim and unpleasant throughout its runtime. The final 20 minutes, however, manages to out-do the entire rest of the film in terms of sheer squeamishness/unpleasantness/potential to scar. Without giving any actual details away, let’s just say that Niamh and two other abused kids adopt the personas of their abusers and proceed to inflict these abuses upon innocent people. This sequence, to be honest, is so sickening, so revoltingly raw and terrible, that it becomes impossible to look away. It truly is like looking all the way to the bottom of Nietzsche’s abyss and seeing a reflective surface. Suffice to say that I hope to never, in this life or any others afterwards, see its like again.

Content and tone aside, Dark Touch, from a filmmaking perspective, is an exceptionally well-made film. The visuals are consistently stunning and moody, if constantly dark but the sound design is a true thing of beauty. Dark Touch is one of the few modern horror films that understand how truly important a good sound design can be to the overall impact of a film. The movie is loaded with great examples of the design but my favorite comes from the creepy scene where Niamh wanders the streets of her town at night, whistling an eerie tune. As she whistles, the sound becomes modulated and distorted, eventually becoming part of the soundtrack, by which time the whistle has been something altogether different and alien. It’s a genius technique, one that is employed at a few other key points in the film. The soundtrack has a tendency to favor dissonant, ringing tones and high, wavering sounds, at times coming across as some nightmarish collision of Philip Glass and Aphex Twin.

From a horror perspective, the violence in the film is fairly hardcore: imagine the poltergeist activity (moving tables, slamming doors) of most “haunting” films taken to a completely Grand Guignol level. People are ripped apart, bodies are torn, tender extremities are pierced, faces are pulverized: the gore scenes are so violent, especially when juxtaposed against the slower, moodier atmosphere of the rest of the film, that they almost come across as parody or satire. Imagine if the kill scenes from a Final Destination film were welded onto a dark indie chiller and you have a basic idea. Across the board, however, the effects work is exceptional and seems to rely on plenty of practical effects, which is always a nice touch.

The acting, unfortunately, tends to be a bit hit-and-miss. Missy Keating, as young Niamh, is a revelation, an actress so perfectly suited to the role that it doesn’t really seem like an acting job. She’s one of the most impressive child actors I’ve seen in years and I really hope she gets a chance to do something other than be miserable for an hour and a half. The adults, particularly Nat and Lucas (Marcella Plunkett and Padraic Delaney, respectively) have a habit of being too over-the-top and frantic, traits which make them seem less capable than the children (which, come to think of it, may be the film’s intent). The script, likewise, can be clunky and overly expository: Lucas, in particular, gets saddled with so many leaden lines that his character can seem more like a plot-construct than an actual human being.

At the end of the day, however, one’s acceptance and enjoyment (if you could call it that) of Dark Touch will hinge entirely upon the child abuse angle, in the same way that appreciation for something like Ms. 45 or I Spit on Your Grave hinges entirely on the rape-revenge subgenre. If you are unable to view cinematic depictions of child abuse (the abuse is very obvious and open, although the film is careful to only show the abuse being perpetrated on adults, for the most part, as opposed to the intended child victims), this is absolutely not something you will be able to sit through. The message behind the film is decidedly non-exploitative and important: the evils of child abuse continue to propagate and spread, long after the initial abuse is but a memory. After watching the film, however, I really did only have one thought: I’m glad that I’ll never have to watch this again.