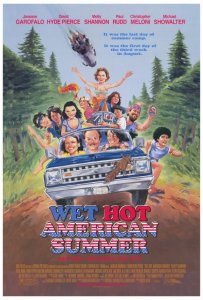 How you approach, and ultimately enjoy, David Wain and Michael Showalter’s Wet Hot American Summer (2001) will probably depend on a few different variables: how you feel about ’80s teen sex comedies; how you feel about summer camp; how you feel about short-lived ’90s sketch-comedy troupe The State; how you feel about parodies of ’80s films, in general; and, perhaps most importantly, how you feel about silly movies. If any of the above set off the kind of drooling response that would put a smile on ol’ Pavlov’s face, the safe best is that you will, in all likelihood, absolutely love this giddy little ode to obliviously horny camp counselors, their perpetually hormone-ravaged young charges and the inherent insanity of Reagen-era America. If not…well…this is probably gonna be as much fun as getting hung from the flagpole by your tighty-whities. Let’s see which side of the line you end up on: fall in for roll call, campers!

In short order, we’re introduced to a ridiculously diverse group of walking stereotypes and quirky characters, all of whom we’ll get to know much better over the course of the day/run-time. There’s Beth (Janeane Garofalo), the dour, “who gives a shit” camp director and Henry (David Hyde Pierce), the disgraced college professor (associate professor, to be exact) who has a summer home near the camp; counselors Andy (Paul Rudd), Coop (co-writer/creator Showalter) and Katie (Marguerite Moreau), who are involved in one of those aforementioned awkward love triangles and incredibly disturbed Vietnam vet/mess cook Gene (Christopher Meloni) and his put-upon assistant, Gary (A.D. Miles).

The film, itself, is merely an excuse for all of the above (and many, many more) to get into one hilarious, goofball, silly or outrageous situation after the next: romances are formed and broken (one character notes how they were “just friends” that morning but had already become “more” by noon, all on the way to falling out of love by the evening…not bad for one day!); friendships are tested; guys try (and often fail) to get the girl(s); Beth tries to keep the whole place running despite nearly constant stress (as if a raft full of kids in a dangerously turbulent river isn’t bad enough, Skylab is falling from space…right on top of their heads!); a can of vegetables speaks and sounds an awful lot like Mr. Archer himself, H. Jon Benjamin…you name it, it probably happens.

As befits a film that features quite a few sketch/improv comedians (out of eleven regular cast members from The State, six are featured here (Showalter, Wain, Merino, Truglio, Black and Kerri Kenney), while Shannon and Poehler got their starts on SNL), Wet Hot American Summer is a nearly nonstop barrage of gags, sexual innuendo, over-the-top characterizations and restless energy, all culminating in the kind of talent show set-piece that delivers as much as it promises (the Godspell bit, in particular, is priceless, especially when introduced by Poehler as “some people who suck dick”).

The point of the film, as with any comedic parody, is two-fold: poke fun at the original source – in this case, teen sex comedies like Meatballs (1979) and Porky’s (1982) – and entertain/amuse on its own merits. In both cases, Wain and Showalter acquit themselves much better than anyone might reasonably expect. As a 1980s parody, WHAS is spot-on, nailing not only the obvious mise-en-scene (plenty of butt-rock classics on the score, feathered hair and mullets, endless references to kitsch/catch-phrases/cultural ephemera) but also the themes, clichés and stereotypes that seemed to freely flow through many films (especially comedies) from that era. WHAS takes its ’80s-worship to pretty ridiculous heights (obviously) but that’s just what the material calls for (deserves?).

Even divorced from the ’80s parody aspects, WHAS is a complete blast from start to finish. Credit a clever script (the film is incredibly dumb but never stupid: there’s a huge difference) but don’t fail to give each and every member of the incredible ensemble cast their fair dues: to a tee, the group manage to build on each others’ performances, becoming something akin to the Voltron of silly comedies. It’s hard to pick out favorites here, although Merino is a constant delight as Victor (full disclosure: Merino has been one of my absolute favorite comedians for some time now) and Paul Rudd is impressively all-in as the temper tantrum-prone Andy. Garofalo does her patented combo of stressed-out/checked-out, while Shannon gets lots of great mileage out of the running gag involving her “road to recovery” via pre-teen psychotherapy.

Of an incredibly game cast, however, perhaps none are more so than Law & Order: SVU mainstay Meloni. Trading the brooding tough-guyisms of Elliot Stabler in for the ridiculously unhinged Gene is a nice move and one that would hint at Meloni’s post-SVU slide into sillier comedy versus gritty police procedural. There’s a night and day difference, here, and many of the film’s biggest, funniest scenes have Gene right at their wacko little hearts.

Perhaps due to my belief that the film was nothing more than a really dumb and cheap parody, I studiously avoided Wet Hot American Summer when it first appeared in 2001, even though I liked The State enough to catch the odd episode, here and there. This, of course, is why “assume” usually makes an ass of you and me: not only wasn’t WHAS the insipid, stupid film I assumed it was, it actually turned out to be one of the better, consistently funny and endearing comedies I’ve seen in several years.

In fact, I ended up liking the film so much that I eagerly plowed through the recently unveiled prequel TV series, Wet Hot American Summer: The First Day (2015), in what felt like one sitting. To my even greater surprise, the series actually manages to one-up the already impressive film, bringing back the majority of the cast (the first film’s unstated joke about 20-year-olds playing teens is even funnier when the cast is now nearly 15 years older and playing younger versions of themselves…the meta is strong with this one, indeed!), along with a raft of great newcomers including the likes of Michael Cera, Jason Schwartzman and several cast members from Mad Men. It adds nicely to the “mythos” established in the original film, while also serving to answer some questions and smooth over some particularly odd headscratchers (we learn the full story of H. Jon Benjamin’s talking veggies, for one thing, and it’s definitely worth the wait).

Ultimately, a comedy really only needs to answer one crucial question: is it funny? Wet Hot American Summer is many things (silly, loud, crude, nonsensical, esoteric, giddy) but, above and beyond all else, it’s definitely funny. Regardless of where your preferences lie on the comedy meter, I’m willing to wager that Wet Hot American Summer will have plenty of opportunities to tickle your funny-bone. As we’re solemnly told at the end of the film, “the entire summer, which kind of sucked, was rejuvenated by the events of the last 24 hours.” Sounds about right, campers…sounds just about right to me.