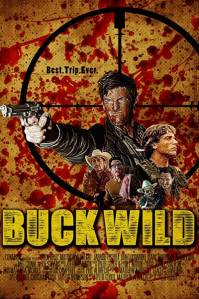 By this point in world history, plain ol’ “vanilla” zombie films don’t really have much effect anymore. Sure, they may be one of the easiest low-budget productions for fledgling filmmakers to get involved in (Got some friends, a camera and a location? Guess what, Jack: you just got yourself the beginnings of a zombie film!) but that also means that we’ve been drowning in this kind of direct-to-video filler for a good thirty years, at this point. Once the “prosumer” camera revolution occurred, it was even easier for filmmakers to pump out this kind of product and it seems that zombie films have been multiplying like Tribbles within the last decade or so. In order to inject a bit of life into the subgenre, filmmakers have turned to various ways to “spruce” up the ol’ gut-munchers, the most popular of which involves slamming comedy and the zombie film together, chocolate and peanut butter-style, to create an entirely new (well, kind of new) sub-subgenre: the zom-com.

While Edgar Wright’s Shaun of the Dead (2004) definitely wasn’t the first zom-com (I’d give that title to Dan O’Bannon’s outrageous 1985 yuk/yuck-fest The Return of the Living Dead), it’s probably (still) the most popular one, as well as the first to take the “zom-com” tag and run with it. In the decade since Simon Pegg and the lads tried to forestall a zombie invasion of the UK, there have been several fistfuls of zom-coms, ranging in quality from “drop-dead hilarious” to “just drop dead, already.” In a fairly glutted field, I’m managed to see several worthy successors to Shaun of the Dead: Fido (2006) was an ingenious melding of zom-coms with candy-colored 1950’s nostalgia, while Cockneys vs Zombies (2012) managed to overcome a terribly generic title with solidly-paced jokes and thrills. And, of course, who could forget Woody Harrelson and Jesse Eisenberg trading quips in Zombieland (2009)? Mixing zombie chills with chuckles isn’t the easiest task but, when done well, the results can be lots of fun. Unfortunately, Buck Wild (2013), the newest feature from the team of Tyler Glodt and Matthew Albrecht, isn’t so much a “big, dumb blast” as a “really dumb film,” only slightly less stupid than the head-smackingly awful ’80s Troma film Redneck Zombies (1989).

Unfortunately, the good will begins to fade as the movie proper begins, mostly because we get saddled with a pretty obnoxious group of protagonists. Our “hero” is Craig (co-writer Matthew Albrecht), one of those perpetually put-upon, straight-arrow types that exists solely to become irritated by various indignities. His “best friend,” Lance (Isaac Harrison) is a ridiculously metrosexual “ladies’ man” who happens to be boinking Craig’s girlfriend, Carla (Amerlia Meyers), unbeknownst to our “hero.” The little group is rounded out by Tom (Dru Lockwood) and Jerry (Jarrod Pistilli), who seem to serve as a perpetually at-odds odd couple: you know, cuz they’re named Tom and Jerry? Like the cartoons? The ones with the mouse and cat? Yeah, it just ain’t funny no matter how you slice it, is it? Tom is the typical mealy-mouthed, glasses-wearing dork: we’ve seen at least a million iterations of this character in just the last couple years, nevermind the last couple decades. Jerry, however, is the real prize in this Cracker Jack box: bedecked in a ridiculous fedora, given to smoking cigars in small cars and practicing his nunchuks in the nude, Jerry is supposed to be the epitome of the batshit crazy outsider, that one guy who just…does not…give a FUCK, bro! Except he’s a colossal weenie, sort of a gene-splice between Crispin Glover and Bobcat Goldthwait’s award-winning performance in the Police Academy movies. As such, not only is it impossible to buy the scene where he puts the cigar out on his own hand (cuz this guy totally looks like he would start bawling) but it’s almost offensive to believe that this nitwit occupies the “badass” role in the film. When your bar is that low, no good can come of it, mark my words.

The plot, such as it is, involves one of those “guys-only weekends,” this one ostensibly set-up to allow for not only some male bonding but some animal-shooting, as well. The “gang” heads to the Buck Wild Ranch (Hey! That’s the name of the film! Clever!), which just happens to be run by Clyde. Clyde’s not looking too good and if you’ve seen any zombie films besides this one, you’ll know why. Besides being infected by a chupacabra, Clyde’s also kind of a dick: he calls the guys “punks” and “pissants” (put up your dukes!) and tells them to make sure to stay within the borders of the ranch. Turns out that Clyde’s next-door neighbor is a self-proclaimed “badass” named Billy Ray (Mark Ford) and he doesn’t take kindly to trespassers. The guys end up running afoul of Billy Ray (an absolutely, astoundingly terrible creation that seems to be part frat-boy, part John Waters, part lame-ass rockabilly clothes horse and completely, totally unbelievable) and a completely awful park ranger, Officer Shipley (director/co-writer Tyler Glodt), which don’t really expand the narrative so much as pad it out. Ultimately, they also run afoul of zombies: turns out Clyde has been infecting other locals and, soon, our city slickers are up to their haircuts in the redneck dead. Revelations are had, truths are learned, friends turn into the walking dead, Jerry acts like a badass, yadda yadda yadda. If the ultimate destination of this one-legged mule isn’t readily apparent by the end of the first act…I’m guessing you might actually enjoy this. Hmm…

Look, I’m not gonna sugarcoat this at all: Buck Wild is a stupid film. Aggressively stupid. Worse yet, it’s a hyperactive, self-aware, tone-deaf kind of stupidity that reminds me more of films like Scary Movie (2000) than Shaun of the Dead. Let me give you a good example of the “humor” on display here. After Officer Shipley pulls the guys over because he’s heard “enough gunshots for Baghdad,” he proceeds to stand outside his car and give them a speech about how if you smell shit, you’re probably standing in it. Officer Shipley, it turns out, smells shit: guess what, he asks them. You’re standing in shit, the others point out. And he is…he really is standing in a big pile of shit. Now, if anything about that was humorous (keep in mind that the “delivery” of said “joke” doesn’t help things), Buck Wild just may be right up your alley. Lest we think that the writers only have one kind of joke up their sleeve, they also show us how hilarious and timely their references are: Tom ends up a captive at Billy Ray’s compound and Jerry goes to save him, in a scene that features an ultra-sleazy brass song, Tom bent over a table wearing only his underwear and Jerry wielding a samurai sword. Yeah, that’s right: it’s a fucking Pulp Fiction reference. Not only that, but it’s a “humorous” reference to the rape scene: now that’s comedy!

Lest it sound like Buck Wild is completely worthless, there are actually three elements of the film that really work. The first element is the cinematography, which is consistently well-done and clear: in low-budget films like this, you’re usually lucky if you get something that looks half-way decent, let alone good. The second element that works (spectacularly well, I might add) are the fake TV shows that we occasionally see. One of them, a public access show called “Fucking Hunting” that features Billy Ray and his motley crew, is an absolute scream, miles away the funniest thing in the film. Hot on its heels, however, is another gem of a fake show, this one called “Living Through the Gray,” a self-help show about dealing with color-blindness. The TV shows are not only the funniest moments in the film, hands down, but they’re actually two of the funniest moments I’ve seen in any film recently: it’s a shame that they’re left to die amid the humorless wasteland that is the rest of the film.

The third element that actually works in Buck Wild is an extremely smart and subversive little commentary on the casual female nudity that inundates most low-mid budget horror films. Unlike similar films that might feature a terrified young starlet running around topless, Buck Wild chooses to make Tom the object of the “male gaze.” For the majority of the film, due to one incident or another, Tom rarely wears more than his underwear and socks: at one point, he fashions a toga out of a garbage bag, only to have a zombie rip it to shreds. Later, he gets to take a shower and emerges, clad in a bathrobe, only to have a passing zombie yank it off, exposing him once again. I’ll be honest: this particular running gag never got old and displayed the kind of invention and thought that I wish the rest of the film possessed. I don’t actually recall any female nudity at all, to be honest, although we get plenty of Tom. In some ways, this seems to be a callback to the Pee Wee character in Porkys (1982), who likewise spends the majority of that film in a constant state of embarrassment, harassment and undress. While the film often seems to be exceptionally mean to Tom, it ends up paying off big dividends, especially during a nicely emotional final setpiece.

Ultimately, however, a few worthy elements don’t a worthy film make. If Buck Wild were just a little less inane and stupid, it would be mighty easy to recommend it as the kind of low-budget romp that it thinks it is. Unfortunately, the film mostly ends up being a showcase of missed opportunities and foul balls, with nary a true home run in the batch (unless we count the TV shows, which really only amount to 2-3 minutes of screen-time, max). While I’m more than willing to give Glodt and Albrecht another chance, there’s no way I would put these guys on my radar: Fool me once, fool me twice and all that jazz.