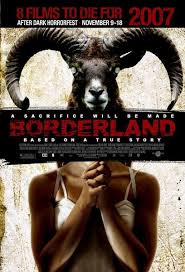 If there’s one thing that modern horror films seem to make abundantly clear, it’s that tourists make great cannon fodder. From Hostel (2005) to Wolf Creek (2005), from Turistas (2006) to The Ruins (2008) all the way to the frigid water of the Reykjavik Whale Watching Massacre (2009), horror films have taught us that foreigners abroad (usually Americans in foreign countries…fancy that!) can expect a few things: beautiful locations, sinister locals, dangerous sight-seeing and more occult ceremonies, dismemberment and torture than they can shake a stick at. Hell, under this rubric, Australia’s Greg Mclean is probably the number one bane to that country’s tourism industry: between his Wolf Creek films and Rogue (2007), his giant croc opus, it’s a wonder that any non-resident would ever want to step foot in the Land Down Under, much less poke around in its isolated, Outback areas.

Tourism-based horror films work, in many cases, because we all (Americans, in particular) harbor certain preconceived notions and prejudices about “the other”: we all want to take in and experience as much of the world as we can but there’s always the nagging notion that what you don’t know can, without a doubt, flay you alive. Meeting new people and experiencing new cultures is always a good thing, we say, but humanity’s inherent fear of the unknown is a mighty powerful primal urge to overcome. For some audiences (and filmmakers, apparently), there can be nothing more terrifying than being “stuck” in a foreign country, surrounded by strangers, unable to fully communicate, protect or look after ourselves. It’s a biased fear, of course, but aren’t all fears? After all, the difference between fearing something and respecting it is usually a pretty small step, one that begins with understanding and empathy. As the TV used to say: knowing is half the battle.

Zev Berman’s Borderland (2007) is another in the long line of “tourists in peril” films, while also slotting neatly into the “torture-porn” subgenre that was spearheaded by the likes of Saw (2004) and Hostel (2005) in the mid-’00s. While I’ve never been a fan of torture-porn films, despite having seen more than my fair share – I’ll go on record as saying that the Saw films are something of a guilty pleasure, for me, while I find the Hostel films (and most of Eli Roth’s output, to be honest) to be fairly worthless, aside from the geek-show appeal – I’ve seen plenty that manage to balance their gratuitous blood-letting and suffering with actual narratives. When done right, these types of films can be unbelievably powerful, drawing us right into the dark heart of suffering and putting us uncomfortably close to the terrible action on screen. Despite some scattered issues, Berman’s Borderland ends up in the “well done” column, thanks to some atypically solid acting, a suffocating sense of helplessness and a connection to real-world events, no matter how tenuous. They’re small differentials, in some cases, but they make all the difference in a relatively crowded field.

The “other,” in this case, is Mexico: to be more specific, the violent, drug cartel aspect of Mexico that’s managed to turn the border between the U.S. and its southern neighbor into a veritable war-zone. The issue, of course, is much more complex than simply “good vs evil”: notions of societal infrastructure, politics (both domestic and international), xenophobia and good old-fashioned capitalism all play in. While the notion of eradicating the cartels is a noble one, it’s also a notion that’s steeped in wish-fulfillment as much as reality: at this point, the relationship between the cartels, Mexico’s political structure and its civilians is too intertwined to be easily severed. There’s also the underlying (and largely unspoken) notion that the United States plays a huge role in this problem: issues of supply and demand notwithstanding, the “war on drugs” has managed to turn cartels into cash cows, in the same way that Prohibition managed to give the mob a significant boost in the ’20s.

This is the framework into which we’re dropped, although the meat of the narrative is another “fish out of water” tale, involving a trio of freshly graduated, all-American high school seniors who decide to have one, last blow out in Mexico and get more than they bargained for. The trio are “types” more than individuals but that’s also par for the course: Henry (Jake Muxworthy) is the macho, cocky douchebag with a dick for a brain and an inherent dislike of the lower classes; Phil (Rider Strong) is the geeky virgin who just wants to get laid and Ed (Brian Presley) is the sensitive, nice guy (and obvious hero). After Ed “saves” a comely bartender (Martha Higareda) who ends up being more than capable of taking care of herself, the trio get a pair of bumming-around companions in the form of Valeria and her demure, religious cousin, Lupe (Francesca Guillén).

This is all well and good, of course, but the film’s opening introduced us to a severely terrifying group of Mexican drug dealers, led by the astoundingly creepy Gustavo (Marco Bacuzzi), and it doesn’t take a psychic to foretell that paths will, eventually, be crossing. When Phil mysteriously disappears after going to visit his 17-year-old prostitute “girlfriend” (she was his first, after all), Ed and Henry, along with Valeria and Lupe, scour the area, looking for any signs of him. When they run into a grizzled, former police detective by the name of Ulises (Damián Alcázar), however, they learn about the cartel and discover just how much trouble their friend (and they) are really in. As luck would have it, they’ve come to town just as the cartel’s “high priest,” Santillan (Beto Cuevas), has arrived: it’s time for a special ceremony, it seems, and Phil is the guest of honor.

Despite its unrelenting brutality, Borderland is actually a fairly thoughtful, well-thought-out film. While the camera never shies away from the violence (particularly in the incredibly unpleasant scene where a cop is tortured), it also doesn’t wallow in it: there’s never the sense that Berman has simply strung one gore setpiece to the next, ala the Hostel films. The violence is all justified within the framework of the story: Santillan and the cartel have a reason for doing what they’re doing, even if it isn’t a particularly solid one, which positions this as the furthest thing from “psycho killers hackin’ up teens.”

Unlike the recent spate of overly-glossy, polished horror films (think anything by Platinum Dunes), Borderland actually has a gritty, grainy look that really helps sell the foreboding atmosphere. At times, particularly during the opening credits, the film actually reminded me (favorably) of Tobe Hooper’s original Texas Chainsaw Massacre (1974), although Berman’s film is nowhere near as accomplished. Cinematographer Scott Kevan, who also shot Eli Roth’s gore-tastic Cabin Fever (2002), does lose points for some unnecessarily shaky camera (especially during some nausea-inducing running scenes that would make the Blair Witch blush) but it’s never bad enough to fully pull one out of the action.

One of Borderland’s secret weapons is definitely it’s collection of bad guys. Beto Cuevas’ Santillan is a cold, reptilian, uber-polite, smart and unassuming dude, the kind of guy that you wouldn’t mind discussing art with…if he wasn’t so busy sawing you into pieces, that is. Channeling something of the cool menace of Anthony Hopkin’s legendary Hannibal Lecter, Cuevas is nothing short of masterful and Santillan is, easily, one of the scariest “real-world” villains to pop up in horror films in some time. We’ve already mentioned Bacuzzi’s freakish Gustavo (sort of a Mexican cartel Michael Berryman who shoots first and asks never), but let’s not forget Sean Astin’s stellar take on the ex-pat-turned-cartel-whipping-boy Randall: friendly, apologetic and completely mercenary, Randall is the last person you’d want watching you in this situation. Put them all together and Borderland has a better group of villains that most action films I’ve seen in a while: kudos, indeed!

While Borderland certainly plays up the popular media perception of the Mexican border as a lawless war-zone (we’re informed that the film is “inspired by real events” at the outset), it’s certainly no more xenophobic than any of the aforementioned tourist-related horror films. We spend time with not only the cartel but also the police and locals (in the form of Valeria and Lupe): it’s not a fully-fleshed portrait, by any stretch of the imagination, but it’s a fair sight more balanced than the typical “sneering, glowering, backwoods” take on this sort of thing.

I also appreciated that Higareda’s Valeria was never a shrinking violet, clichéd sexpot or damsel in distress: by the film’s conclusion, she’s maintained herself as a fairly independent asskicker and a worthy equal to Ed. Additional bonus points for allowing the character of Henry to develop (if ever so slightly) from arrogant asshole to properly-humbled dude after a confrontation with Gustavo: I’d change my tune awful damn quick if I butted heads with that guy, too!

Ultimately, Borderland is a well done, if decidedly unpleasant, film: despite a questionably happy ending, the majority of Berman’s movie is claustrophobic, lean, mean and engineered to pummel an audience into submission. While nothing here surprised me, necessarily, I was genuinely impressed by the way all of the moving parts came together into a cohesive, fairly unique and endlessly disturbing whole. While there might not be a shortage of tourist-in-peril or torture-porn films on the market, Berman’s Borderland manages to stand out from the crowd: sometimes, that’s all you can ask for.